The biggest takeover in the history of DFDS A/S has made the Danish ferry operator the target of a selloff as shareholders question the timing of its $1.2 billion acquisition in Turkey.

DFDS fell the most in two years in Copenhagen trading on Monday as Turkey’s spat with the U.S. risks sending the Middle East’s largest economy into a full-blown financial meltdown.

“The current Turkish economic storm may knock over DFDS, at least in the short term,” Per Hansen, an investment economist at Nordnet, said in a note. 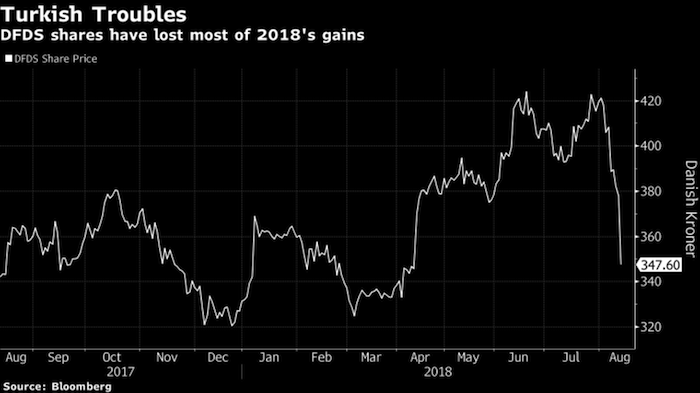 DFDS completed its takeover of ferry operator U.N. Ro-Ro in June. That was earlier than expected and has now increased the Danish company’s exposure to the beleaguered Turkish economy.

“The timing is what it is,” DFDS Chief Financial Officer Torben Carlsen, said by phone. “We expect that this will be resolved over a period of time. We made the acquisition based on long-term expectations of growth in Turkey and we still have those expectations.”

DFDS, which is due to report second-quarter earnings on Aug. 16, “also sees some advantages as the falling lira is increasing Turkish exports to Europe,” the CFO said. The company is to an extent protected against currency swings: clients pay in lira, but bills are based on costs in euros, he said.

“On the other hand, the weaker lira is causing imports to drop,” Carlsen said. “So we’re going from a balanced import-export situation to a situation where we move more freight out of Turkey and then return more empty vessel capacity the other way back.”

For DFDS, which has otherwise been a favorite among investors with its shares surging about five-fold since 2013, Turkey’s demise isn’t the only geopolitical event threatening returns. The company, which was founded in 1866, is also heavily exposed to the U.K. and stands to lose if European Union talks result in a so-called hard Brexit.

“The combination of the Turkish downturn and Brexit challenges may prove to be one too many challenges for DFDS,” Hansen at Nordnet said. “The company suspended dividends and share buybacks in connection with the U.N. Ro-Ro acquisition and that may not be the only good thing that investors will miss out on in 2018.”
Source: Bloomberg