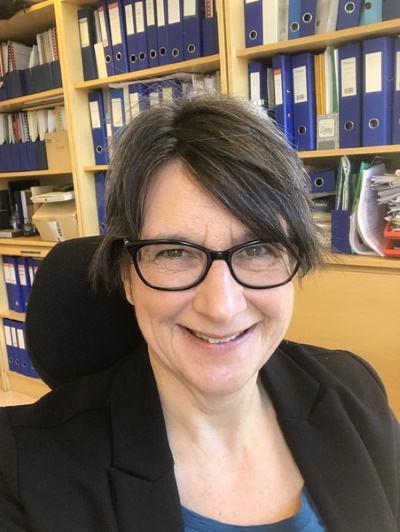 offshore markets, as well as the activities and output of the committee.

Vice chair Astrid Seltmann followed up with an analysis of the general global marine insurance market trends, looking in more detail at the cargo, hull, offshore energy and P&I sector. She also highlighted the role of detentions as an indicator for future claims and the increase in fires on container vessels. The Facts and Figures workshop was rounded off by guest speaker Michelle Bockmann, an analyst from Lloyds List Intelligence, who presented on a highly relevant current issue, namely how the Iran-US geopolitical crisis is impacting shipping and insurance risk. 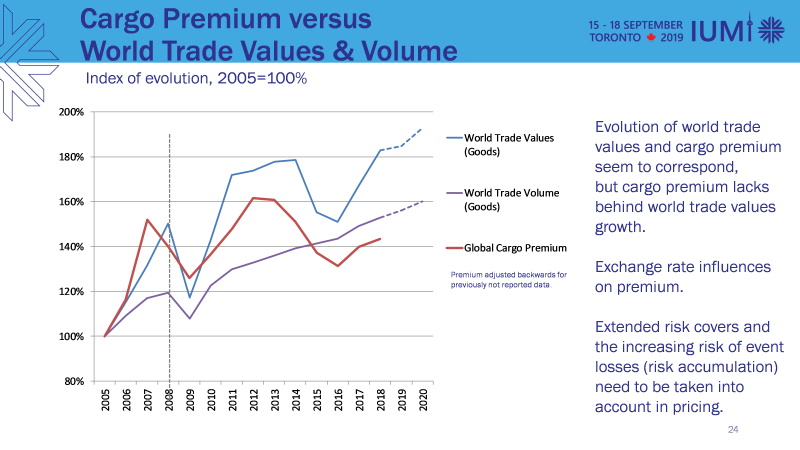 The core of the committee’s work continues to be the production of extensive statistics each spring and autumn. These provide insight into how frame conditions in the marine industry develop, such as global trade, world fleet, offshore activity and what impacts marine insurance results specifically.

The number of associations participating in the IUMI major claims database project increased substantially during the second year of the pilot project. This winter, the quality of the collected data will be evaluated and benchmarked against other sources. Over the year, the committee has cooperated with other IUMI technical committees (where applicable) and teamed up with third party data providers to investigate relevant issues and secure up-to-date data for the industry.

Global GDP growth is projected to slow down somewhat in 2019 and 2020, led by decelerations in trade growth and investments. The Asia-Pacific region will make the strongest contribution to global growth. Economic risks have risen, but not enough to trigger a near-term global recession. These include US-China trade conflicts, hostilities in the Middle East, rising debt levels, and political uncertainty in many parts of the world.

World fleet growth is easing, and the average fleet age is increasing. Ship earnings are improving but are still competitive. Since the oil price started to rally in 2017, activity in the offshore sector has begun to gain traction again, but under various influences the outlook in 2019 is rather uncertain. 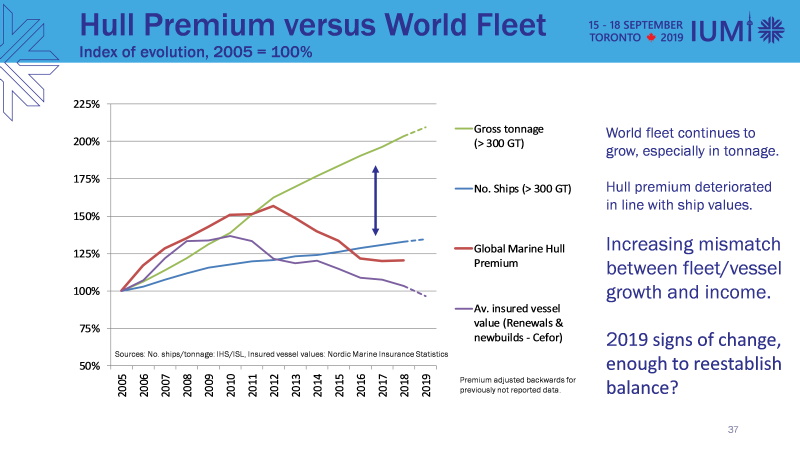 Cargo: The upswing in global trade triggered a 2.5% increase in the overall cargo premium, but cargo insurance results were heavily impacted by large event losses such as the Tianjin port explosions, hurricanes/nat-cat damage and more recently a series of fires on container vessels. Increasing risk accumulation on single sites is a challenge which needs better monitoring, but also increasing expenses and coverage extensions are a concern.

Hull: The overall hull premium stagnated in 2018 compared to 2017. Comparing hull premium and vessel values to the world fleet development reveals an increasing mismatch between fleet growth and hull income in the years up to 2018. In 2019 the market seems to have bottomed out and there was an uptick in premiums, possibly as a result of reducing market capacity with some insurance units leaving this market. At the same time major losses are having a significant impact after three relatively benign years. The substantial increase in fires on large container vessels will impact hull and cargo markets equally, and there were also collisions and groundings. Hull insurance results continued to deteriorate substantially over the last three years, with attritional losses accounting for an increasing share of the costs. It remains to be seen how the combination of some increase in 2019 premiums with a renewed impact of major losses will impact the 2019 results. 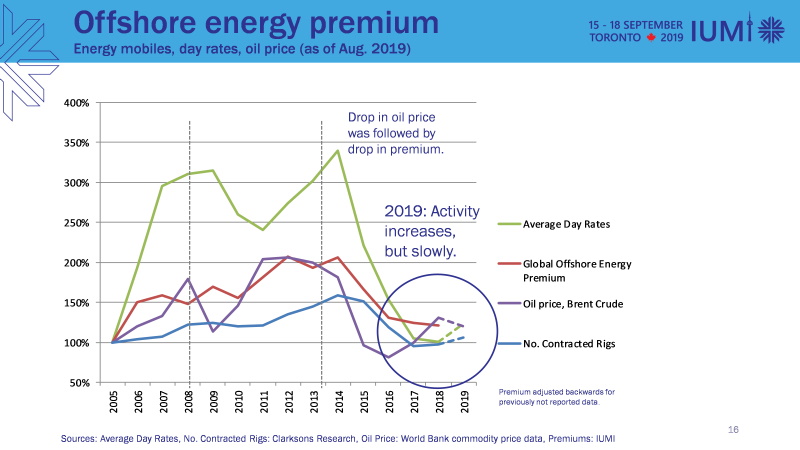 Offshore Energy: After two years with more than a 20% drop in premiums, in 2017 the decrease flattened out after the oil price started to rally. With the reduced activity followed a modest major claims impact, but with substantially reduced income levels also in this sector attritional losses took an increasing share of the premium. There was some increase in activity recently, but the outlook in 2019 is still uncertain with a fluctuating oil price and various influences in different directions. The claims potential arising from the reactivation of complex offshore units is a concern.

In general, there are positive signs on the horizon, but sustainability of results can only be achieved by a robust risk evaluation taking into account all risk aspects, such as scope of coverage, characteristics of the covered risks, accumulation scenarios, climate change, new technology and the combined effect on expected claims costs.
Source: By Astrid Seltmann, Vice Chair of the IUMI Facts and Figures Committee and Analyst/Actuary of the Nordic Association of Marine Insurers (Cefor)