As a result of recent developments, with travel restrictions, quarantine obligations and new government policies announced daily around the world, we are making frequent updates to most of our estimates.

Below are some of our forecasts from the just-published 12th edition of the report. Please note that some historical numbers may differ from week to week as governments revise their official figures.

Stay up to date and get immediate email notification when we publish COVID-19 related reports and press releases. Sign up here

In another consecutive update of our weekly estimates, our newest forecast for oil demand now projects a decrease of 11.5% for 2020, or 11.4 million barrels per day (bpd) year-on-year. Our estimates show that total oil demand in 2019 was approximately 99.5 million bpd, which is now projected to fall to 88.1 million bpd in 2020.

Further ahead, total oil demand in 2021 is expected to average at 96.3 million bpd.

This update takes into account developments that have occurred up to and including Tuesday, 26 May. 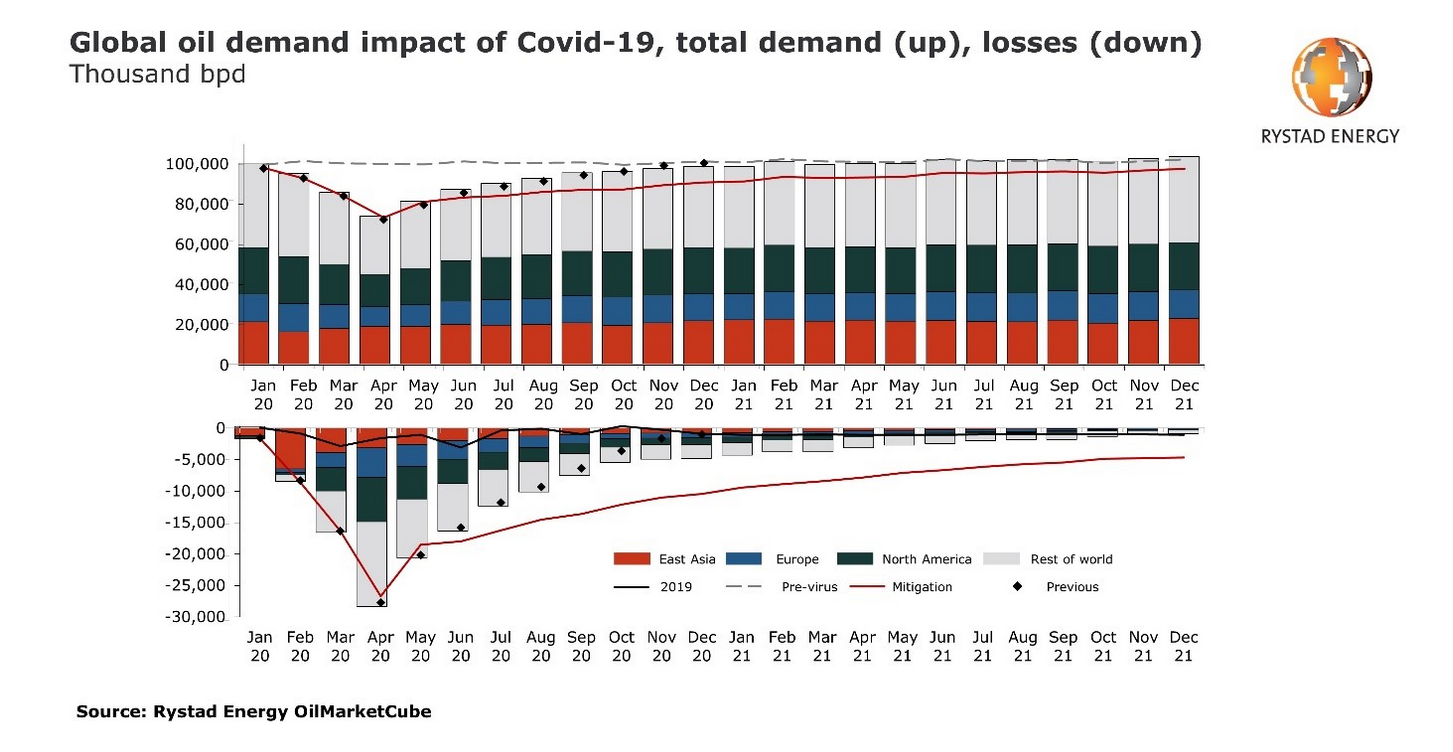 We believe that total global demand for road fuels will fall by 9.9% in 2020, or by 4.7 million bpd year-on-year, landing a bit higher than what we estimated in last week’s report.

In 2021, road fuel demand is expected to average at 46 million bpd.

Among the various fuel sectors, we expect jet fuel to be hit the hardest. We expect global commercial air traffic will fall by at least 49.1% this year versus the levels seen in 2019, which we estimate stood at around 99,700 flights per day. For 2021, we expect around 76,800 flights per day. These numbers will be revised as operators continue to cut routes.

Many distressed airlines are facing heavy cost cuts and are laying off unprecedented numbers of employees as many non-essential routes are closed.

As a base case we now assume that the common summer air travel peak will not occur at all this year. We see global jet fuel demand falling by almost 40.8% year-on-year, or by at least 2.9 million bpd. Last year’s demand for jet fuel was about 7.2 million bpd.

In 2021, total oil demand in Europe is expected to average at 13.2 million bpd and road fuel demand at 6.6 million bpd.

Aside from energy-related projections, the Covid-19 Report also includes general estimates regarding the spread and development of the pandemic globally, including forecasts regarding how the virus will evolve in the most affected countries.

Our numbers will be adjusted weekly for every new dramatic step taken by governments to slow the spread of Covid-19.
Source: Rystad Energy

2020-06-01
hellenicshippingnews..
Previous: China to roll out eleven measures to deepen financial reforms
Next: Will China continue to bank on coal?