FINANCIAL OVERVIEW
The Group underwriting result was negative again this year, with net claims incurred in excess of net earned premiums. The investment performance this year produced a much smaller gain than in the recent past after some dramatic movements in markets in the fourth quarter. Total calls and premiums were higher than in the prior year, at USD216.9m compared with USD200.1m. There was again no general rate increase at the 2021/22 renewal, but individual Members’ rates were adjusted to reflect their claims record and risk profile where necessary. Reinsurance costs were higher primarily due to rate increases on the International Group’s reinsurance programme. In October 2021 there was a further capital distribution to Members of USD25.0m.

CLAIMS
Claims incurred in the financial year were significantly higher than the prior year. Retained claims incurred in the 2021/22 policy year at the 12-month stage were USD143.9m, slightly higher than the 2020/21 policy year at the same stage. 16 claims that are currently expected to cost more than USD1.0m were reported, with an aggregate estimate of USD46.4m. This is lower than the prior policy year, which saw 20 incidents reported with an aggregate cost of USD63.4m. Pool claims had a spike in the first half of the year but settled down after that, albeit they stand at USD487.0m which is a record high at the 12-month stage of a policy year, surpassing the 2020/21 total of USD478.1m at the same stage. In total, 11 incidents had been reported compared to 22 in the prior year. The development of prior year claims has generally continued to see improvement, but the 2020/21 policy year has seen a number of late notifications that has reduced the overall improvement and led to an increase in the net provision this year. Nevertheless, USD45.4m was released from the claims provisions held in respect of those years. 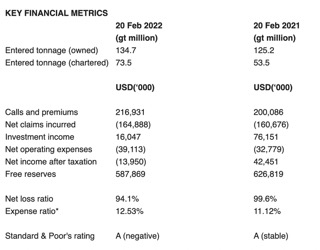 CEO’S STATEMENT
Andrew Cutler, Britannia’s CEO, commented as follows:
“Britannia is enjoying continued growth, thanks predominantly to the loyalty of Members, with entered tonnage at a record high. Reflecting this growth, the Managers continue to invest across all functions and in all of its regional hubs. Key to Britannia’s strength remains the provision of quality service, while maintaining its financial strength.”
Source: Britannia and Tindall Riley

2022-09-29
hellenicshippingnews...
Previous: GTT receives approval in principle from bureau veritas for the design of a LNG-Fuelled & “NH3 ready” very large crude carrier
Next: Maritime Decarbonisation a Focus for MIAL on World Maritime Day