A suspected coronavirus outbreak on 20 ships off the coast of a tiny Indian island has left 300 ill seafarers stranded on board without basic medical supplies for weeks, international maritime charity Sailors’ Society has reported.

Around 70 per cent of the estimated 450 crew on the ships, near Port Blair on the Andaman Islands, have shown symptoms of the virus.

The seafarers, most of whom are from India or the Andaman Islands working on domestic ships, have been quarantined on board for more than three weeks without access to basic medicine such as paracetamol or cough syrup.

The charity is delivering £500 (GBP) worth of medication to the desperate crews this week.

Sailors’ Society’s CEO Sara Baade said: “The men weren’t allowed on shore because the authorities didn’t want the infection to spread, especially as there is very little medical capacity on the island. 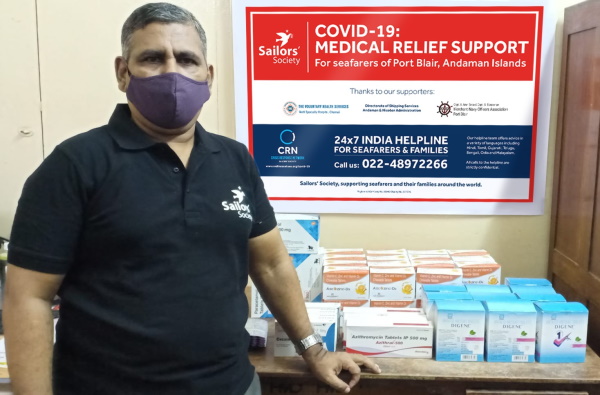 “To have an outbreak of this virus on board ships, where everyone is in a confined space, is frightening enough. When they have no medical supplies, and no possibility of getting ashore for medical help, it must be nothing short of terrifying.”

Sailors’ Society got involved after a local captain informed it of the crews’ plight. The charity contacted one of its partners, the Voluntary Health Services Hospital in Chennai, India, which provided the over-the-counter medicine.

Sailors’ Society has been trying to find out how the seafarers are, but due to the remote nature of the ships and the number of ill seafarers, it has not been possible to speak to anyone on board. It is hoping to get an update when local volunteers deliver the medicine.
Source: Sailors’ Society