50 million people quarantined in China to contain spread of Coronavirus – how does it affect shipping?

The outbreak of the novel coronavirus, declared a global health emergency by the WHO, has caused massive uncertainty across the global markets with the official death toll rising to 213 people on 31 January 2020. Approximately 50 million people is on lockdown in 16 quarantined cities (source: The Washington Post on 28 January 2020).

The outbreak coincides with the Chinese Lunar New Year Holiday, the low season for seaborne demand. The outbreak has led to a nation-wide extension of the holiday until 10 February 2020 at least, essentially shutting down a large fraction of the Chinese economy. Given the rapid spread of the virus it seems likely that the shutdown could be extended even further, which is set to protract the seasonal slump for the shipping markets.

Implications for the shipping markets

Dry bulk shipping remains heavily reliant upon robust Chinese imports and a prolonged shutdown of the Chinese economy is set to bring a significant slowdown of industrial production, which will inevitably deepen the seasonal slump that the dry bulk is currently stuck in. IMO2020 is also taking its toll. 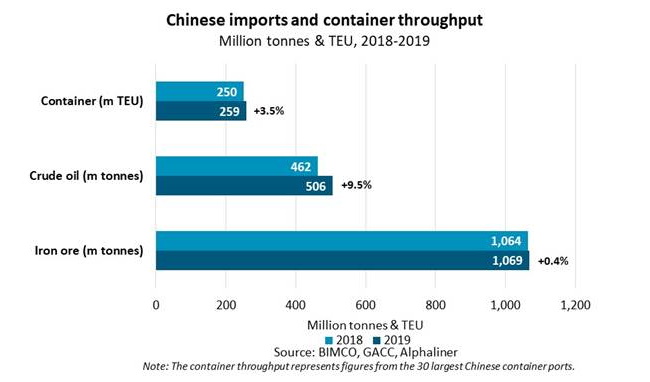 China’s import of crude oil products plays a pivotal role for tanker shipping. The virus has already taken its toll on domestic demand for oil products and anecdotal evidence suggests that Chinese refinery utilization rates have been dropping over the past week, limiting the need for crude oil imports.

Liner shipping is dependent upon external demand, which currently remains somewhat unaffected, but a slowdown of Chinese manufacturing, induced by the virus, could lead to lesser container exports from China. Major carriers have already started to blank more sailings and the trend is expected to persist if the virus continues to spread.

Medium-term implications are hard to forecast at such an early stage, but with past virus outbreaks the markets have typically rebounded in a matter of months. The outbreak of the coronavirus adds yet another layer of massive uncertainty to the shipping markets.

Naturally, shipyards, repair yards as well as ships in transit are also indirectly affected by this issue.
Source: BIMCO

Previous: Slow climb out of the trough
Next: Tanker Market: The Libyan Effect