The port of Rotterdam is working hard to reduce CO2 emissions, and this is visible in all sectors. Mega-Inliner is such an innovative solution for tank containers. By placing a synthetic bag (inliner) in the tank container, Mega-Inliner saves you the need to go to a cleaning station. This means not only a reduction in mileage, waiting times and cleaning agents, but also, ultimately, a reduction in carbon dioxide emissions.

The life cycle of a tank container usually starts with the transport of the most vulnerable products: food products such as beer. By thoroughly cleaning the tank after each load and putting it under CO2 pressure, no oxygen is left behind and the container can be used in the beer sector, for instance, for the first period. After that, other food products can be transported in the tank container, then fats and oils, and finally the cycle ends after a few years in the chemical industry. The laws and regulations regarding previous loads of tank containers are strict. 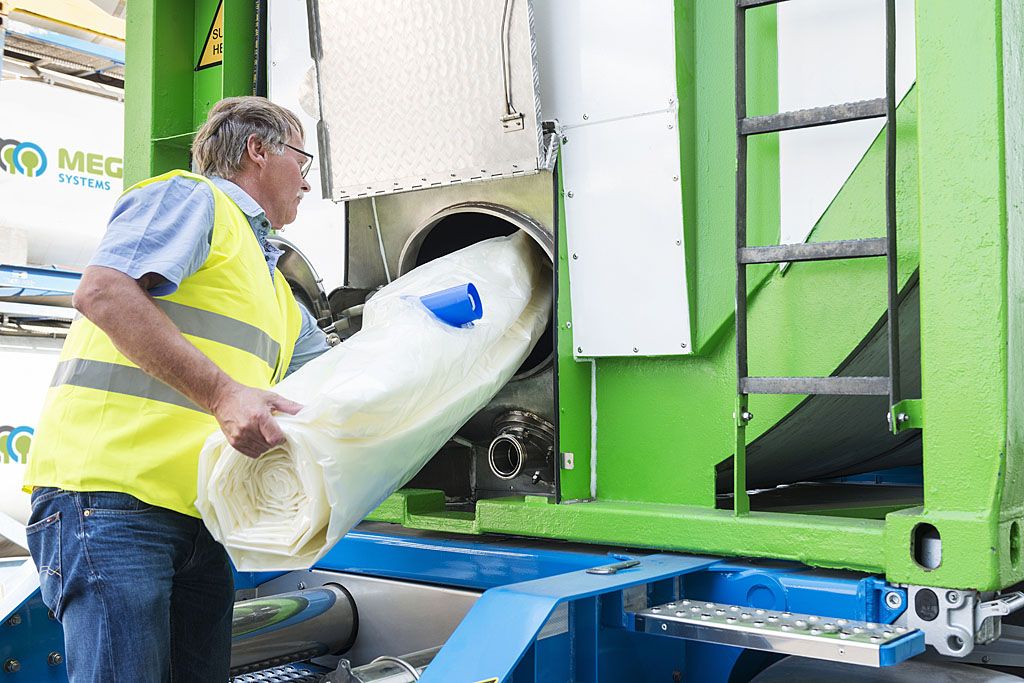 The patented inliner is placed in the container like a seventeen-kilo rolled up toothpaste tube and unrolls itself when the tank container is filled.

Virgin tank
The use of the Mega-Inliner means that the cycle runs differently, says Jaap de Jong, Director of Business Development Central Europe at Mega-Inliner. “The synthetic bag in the container ensures the tank remains virgin after each load. This allows you to use the container, for instance, to transport beer from the Netherlands to Asia and return with latex. This would be unthinkable in the current system. You don’t have to deal with previous load restrictions and you can eliminate the entire bookkeeping with associated costs regarding previous loads.” At Mega-Inliner, clients can lease tank containers that have been especially prepared for the use of in-liners. The inliners are for single use. We also offer a buy and lease back construction for the existing fleet of tank containers in the market.

No empty journeys
However, the main advantages of the Mega-Inliner are the elimination of restrictions due to previous loads and the saving of the trip to and from a cleaning station after each load. “In the Netherlands you often find such a station within fifty kilometres, but in other countries you sometimes have to make a detour of a day,” explains De Jong. “Just consider all the empty kilometres, some two thousand litres of water and the cleaning products you save. Finally, there is also a positive effect on the service life of the container.”

Rolled up toothpaste tube
The origin of Mega-Inliner lies with a previous company of CEO Sidon van Laarhoven, where a synthetic bag was already being used for tank beer installations in the catering industry. De Jong: “In 2006, Anheuser-Busch InBev challenged us to develop an alternative to the continental shipping of bulk beer and the intercontinental transport of bottles, cans and kegs of beer. We had to wait for the right film for 25,000 litre bags to fit into 20 ft containers, so that we could transport up to 2.5 times more per TEU. When that film was launched on the market in 2016, Mega-Inliner was born.” The patented inliner is placed in the container like a seventeen-kilo rolled up toothpaste tube and unrolls itself when the tank container is filled. The bag protects against environmental influences and eliminates the risk of food contamination. De Jong: “Usually tanks are pumped out, in our case, we press air against the outside of the inliner in the tank and empty it. This way, less residue is left behind. The Mega-Inliner is made of approved polyethylene multi-layer film, which is completely recyclable. Eventually, we want to work with fully biodegradable materials, preferably within two years.”

The Mega-Inliner can be used for all liquid, non-dangerous goods. By increasing the capacity utilisation per container, the system not only reduces CO2 emissions, but is also cost effective.
Source: Port Of Rotterdam