Recent signs point to a pickup in world seaborne coal trade during 2021. But it seems unlikely that the strengthening will fully reverse last year’s huge decline, and there appears to be limited potential for continued recovery next year. A sustained downdraft from environmental influences is predictable, implying a declining longer term trend in global trade volumes.

The global coal trade rebound unfolding this year is reinforcing the impact of upturns in other dry bulk commodity movements. It is assisting the bulk carrier freight market to perform strongly. The extra support is valuable, because coal comprises over one-fifth of all seaborne dry bulk trade. Given such a large contribution, prospects for a flattening and eventual declining coal trend cast a shadow over the outlook for bulk carrier employment.

World seaborne coal trade evidently fell by about 9% in 2020, following slow growth in the previous twelve months. While forecasts for 2021 currently are especially tentative – amid uncertainty about the pace of the global recovery from the coronavirus pandemic – calculations by several analysts suggest that a 4-5% increase may be achievable. The chart below illustrates an example of cautious optimism.

Figures included in this chart suggest that world coal trade (including land movements but mostly seaborne) could increase by 52 million tonnes or 4% in 2021, from 1329mt last year, to reach 1381mt. These calculations, by the Australian Government Department of Industry, Science, Energy and Resources (AGDISER) are based on expectations of similar growth rates in both steam coal and metallurgical coal segments. An extended but decelerating upturn is envisaged in the next two years, an outcome which some other analysts may consider too optimistic.

Reviving economies
Behind predictions of a partial coal trade recovery is a vital assumption. After the devastating impact of the pandemic coupled with measures implemented by governments to control it, in most countries, global economic activity is expected to revive vigorously during 2021.

Last year China, which achieved a remarkably quick revival, was the only major country to see economic growth, albeit limited. Other countries experienced severe contractions. Through the second half of last year some signs of a fragile recovery pattern began to emerge and, in the early months of 2021 resuscitation has become more solid. This improving trend was reflected in the International Monetary Fund’s upgraded forecasts published a few weeks ago for global gross domestic product growth in 2021, accompanied by an assertion that “a stronger-than-anticipated rebound” is occurring.

The IMF’s forecasts show world GDP growth reaching 6.0% in 2021, more than reversing the 3.3% contraction seen in the preceding twelve months, although the pattern is expected to be uneven among individual economies. Assisting the upturn, a more vigorous turnaround in the USA than envisaged earlier reflects the new administration’s massive fiscal spending programme evolving. China’s growth is predicted to accelerate from last year’s limited increase, while Europe and Japan see economic activity resuming expansion.

These predictions were described by the IMF as surrounded by “a high degree of uncertainty”, with many possible downside as well as some upside risks. The pace of progress out of the pandemic globally is difficult to foresee, amid an interlinked health and economic crisis. Although current signs look promising in many countries, underpinned by vaccine rollouts, in others controlling the virus remains elusive. Consequently economic growth predictions for 2021 and beyond remain somewhat speculative. 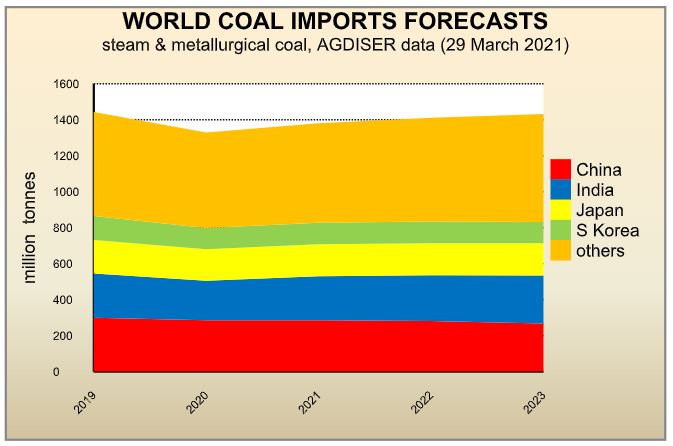 Rising energy demand
Energy consumption around the world seems certain to be boosted by strengthening economic activity. Rising demand for the products of numerous industries, and the extra transport capacity required, will result in increased usage of a wide variety of energy sources.

Two aspects complicate the task of estimating the implications. Within the broad and probably realistic expectation that energy-consuming activities will regain momentum, the precise nature of this pattern is more difficult to foresee. Also, downwards pressure on fossil fuels consumption from environmental policies is a pervading and intensifying influence, with particular constraining effects on coal.

How these factors will unfold through 2021 and beyond is rather hazy. What is clear is that renewable energy sources – especially wind power generation – are set to attain an enlarging proportion of energy output in many countries. But it seems likely that, amid the 2021 upturn in overall global energy use, a positive impact on coal will be seen.

In the part of trade comprised of coking coal, about a fifth of the total, consumption will be raised by recovering steel production in the blast furnace/oxygen furnace segment as demand for steel products strengthens. For this method of steelmaking, coking coal is an essential input. By contrast steam coal trade, especially the dominant proportion associated with power generation, is more vulnerable to negative pressures. National policies in many countries are increasingly moving energy supplies away from coal towards cleaner alternatives, aiming to cut air pollution and carbon emissions.

A comprehensive analysis of the outlook for world energy published by the International Energy Agency in April this year has reinforced expectations of a demand rebound. The IEA now expects a 4.6% uplift in world energy demand in 2021, more than offsetting the 4% contraction recorded in 2020. Fossil fuels consumption is set to grow significantly, amid electricity demand “heading for its fastest growth in more than 10 years”, an envisaged 4.5% increase this year. These estimates are based on the IEA’s wider assumptions about economic activity reviving.

Potential trade expansion
An envisaged global coal trade pickup in 2021 follows last year’s contraction, when the volume fell by well over 100mt or almost a tenth. This weak outcome was preceded by an irregular pattern of annual changes. After a large 7% reduction six years ago in 2015, the world total remained flat in the next twelve months before increasing at over 5% annually in 2017 and 2018. In 2019 a slowing to about 2% growth was seen.

About a third of last year’s weakness was concentrated in Europe, where seaborne coal imports plummeted by around 40%. Large downturns in the two largest importing countries, China and India were accompanied by big reductions in Japan, South Korea and Taiwan. Among other importers, by contrast, weakness was limited. In a group of smaller Asian buyers – Malaysia, Pakistan, Philippines, Thailand and Vietnam – where coal-fired power generation is still robust, further rapid imports expansion continued in 2020.

The 4% global coal trade upturn in 2021 illustrated in the chart, as envisaged by AGDISER, incorporates increased imports into all the countries shown except China, where the annual total is expected to remain flat at 286mt. According to these calculations, the second largest importer India could increase its total by 11%, to 244mt. In Japan and South Korea 2% imports growth is expected to raise volumes to 178mt and 120mt respectively.

For the remaining two-fifths of world coal imports, as a broad category, a rise of about 4% could be seen this year. The segment includes the smaller Asian importers which are now making a much more significant contribution, where growth in purchases especially of steam coal seems likely to continue at least in 2021. Potential for European coal imports to partially recover is not so clear, but there are tentative signs pointing to a restrained but still sizeable rebound.

Opinions among observers about prospects for some importing countries vary within a fairly wide range. Nevertheless the general direction of the foregoing predictions seems plausible. Also the extent of changes, mainly positive, envisaged by the calculations are seemingly credible. Yet in many cases a substantial input of informed guesses is unavoidable because, in addition to normal commercial aspects, unpredictable political influences affecting coal probably will continue to shape the outcome.

Support for ideas of a positive outlook for the coal market this year has been expressed by the International Energy Agency. At the end of last year IEA analysts argued that “a global economic recovery in 2021 is expected to drive a short-lived rebound in coal demand”. Their forecast then was a 2.6% annual rise in global coal demand this year, amid higher electricity generation and industrial output. After that, a flattening out was envisaged. Coal use was “not set for a rapid decline in the immediate future”. The latest report by the Agency has raised that estimate for the current year, suggesting that “coal demand is on course to rise by 4.5% in 2021”.

Varying importer prospects
Looking at prospects for major importers in detail, several influences are prominent. Changes in overall energy demand, and contributions from diverse supplies – oil, gas, coal, nuclear and renewable energy – are an aspect in individual countries. Variations in domestic coal production and prices, and logistical constraints in moving it around within countries internally are also evident in several large importing countries.

Uncertainty about these elements in China is particularly visible. Imports, including some overland movements, comprise a relatively small proportion of the vast Chinese coal market, which is mainly supplied by domestic mines. This characteristic amplifies the effects of changes in domestic production, stocks and prices and the related government policy implications. Specific policy decisions about import volumes in both the short term and longer term also have an impact. For 2021 a flat or quite possibly declining seaborne imports volume is considered likely by a number of analysts.

By contrast, expectations for India’s coal imports this year have been positive, with a strong rebound forecast, to reflect the country’s recovering economic activity. However, the recent severe setback in controlling the covid pandemic may delay recovery. Potential for a big imports upturn was based on an idea that consumption, in power generation, cement manufacturing and steel production would increase greatly. This expansion might exceed the ability of India’s huge domestic coal mining industry and rail transport system to deliver required extra quantities, necessitating large additional foreign supplies.

Troubling imponderables
Attempts to assess the global trade outlook for any commodity, based largely on economic factors with perhaps some general assumptions about weather patterns, are hard enough. But as already mentioned coal, the second largest dry bulk trade, is increasingly determined by politics, which implies unpredictability even if the trade trend’s general direction seems obvious. The prevailing emissions reduction agenda, motivating political decisions in many countries, is now the principal driving influence affecting coal use and import demand.

National energy policy changes in numerous countries in the past few years have been mostly unfavourable for coal. This feature is set to persist. Measures supported switching towards cleaner natural gas, or the often preferred choice of renewable energy supplies, especially by expanding onshore and offshore wind power generation capacity. Improvements in air quality and reductions in carbon emissions, the aim of this process, have been attained. As a direct result coal-fired power plants have been closed and decommissioned, with more to follow in a wide range of countries.

But for the other main user of coal, steel mills using the predominant blast furnace technology, cutting emissions is harder to achieve. In blast furnaces coal, mainly in the processed form of coke, is an integral part of the raw materials mix producing pig iron. This characteristic is set to ensure that coking coal trade is subject to relatively limited downwards pressures.

Changes in national policies already implemented restrict potential for a global coal trade rebound in 2021, and probably will prevent a full recovery from last year’s weakening. Negative impulses pervading the international coal market are affecting the outlook for both the short and longer term. While the precise timing and extent of adverse effects on coal usage and imports are not always clear, a declining trend in world seaborne movements through the 2020s following a temporary upturn looks increasingly likely.
Source: Article by Richard Scott, managing director, Bulk Shipping Analysis, on behalf of Hellenic Shipping News Worldwide (www.hellenicshippingnews.com).

Previous: Panama reaffirms its commitment to international compliance
Next: Demolition Market “Hotting Up”