A first in liner shipping: Hapag-Lloyd to convert ship to LNG

The invention of the steamship at the end of the 18th century revolutionised the entire shipping industry, and there are some parallels with the use of liquefied natural gas (LNG) in container shipping today. For example, to operate using this fuel, instead of being able to simply flip a switch, you have to rethink all the equipment on a ship. When Hapag-Lloyd starts converting the large container ship “Sajir” in mid-2020, it will be launching a pilot project that could pave the way for the entire shipping industry.

Whenever the “Sajir” is in Hamburg, Hapag-Lloyd engineers or other companies with which the shipping company is collaborating on this project go on board to take measurements of the vessel and draw up plans. After all, converting the 15,000 TEU vessel will pose completely new challenges. Whether it is figuring out where to store the LNG on board, laying the additional piping systems or treating the fuel, all of these aspects much be integrated into the overall ship in a manner which ensures that the “Sajir” will continue to be available for service and perform at the highest level. This, in turn, makes the conversion very complex and time-consuming for everyone involved.

“By converting the ‘Sajir’, we will be the first liner shipping company in the world to retrofit a container ship of this size to LNG propulsion”, says Richard von Berlepsch, Managing Director Fleet Management at Hapag-Lloyd. “This is an unprecedented pilot project, and one with which we hope to learn for the future and to pave the way for other ships of this size to be retrofitted to use this alternative fuel.” 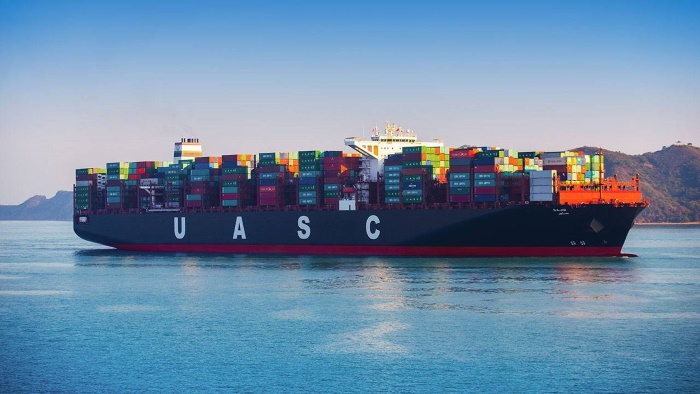 Inspired by the Sustainable Development Goals of the United Nations, the International Maritime Organization (IMO) has set ambitious goals: Starting on 1 January 2020, all ships worldwide will have to operate using fuel with reduced sulphur content: from 2030, CO2 emissions are supposed to be reduced by at least 30 percent; by 2050, by 50 percent – in each case compared with 2008. By 2100, shipping is supposed to be completely emission-free.

At present, no one knows which fuels can be used to reach these goals. Using LNG rather than standard heavy fuel oil reduces CO2 emissions by roughly 20 percent, and sulphur dioxide and particulate matter by more than 90 percent. Thus, on the path towards zero emissions, it is more of an interim than a final solution. In any case, it is currently the eco-friendliest fuel available.

While other shipping companies have already ordered LNG-powered newbuildings, Hapag-Lloyd has decided to convert one of its 17 so-called “LNG-ready” vessels. In mid-2020, the “Sajir” will go to the HuaRun DaDong Dockyard near Shanghai for three months to have its conventional engine and auxiliary engines converted into a dual-fuel system. This will enable it to burn LNG as well as low-sulphur fuel oil as a backup solution. The gas storage system will use the space normally occupied by 290 TEU, which means the vessel’s container capacity will be lowered by the corresponding amount.

To keep the time in dry dock as brief as possible, the roughly 1,300-metric tons tank will be completely manufactured and assembled before reaching the shipyard, where it will be lowered into the prepared hold with the help of a floating crane. And the components for the gas treatment as well as for the engines and the aggregates will be prepared as much as possible, too. The fact that the engine room is located close to the tank will allow the connection between the aggregates and the gas treatment system to be made using very short pipelines.

Hapag-Lloyd will invest approximately USD 30 million in the conversion. But there will be more technical challenges after it is completed, as the gas must always be kept at the required temperature and pressure level in the tank – even if the ship is at anchor for an extended period of time. “LNG-powered ships have to be handled in a completely different way,” von Berlepsch continues. For this reason, Hapag-Lloyd crews will undergo intensive instruction courses beforehand, which will include training on LNG ships to become familiar with how to use the fuel in real-life operations.

The “Sajir” has been sailing under German flag since May, when Captain Michael Kowitz and his crew boarded the vessel. He will also be in control of the ship after its conversion. “Being part of this project is an exciting challenge for me,” he says. “I’m looking forward to passing on my experiences and to thereby being able to help shape the project.”

The “Sajir” will go back to sea in the fourth quarter of 2019, initially in trial operation. The ship will then return to a liner service between Asia and Europe – and its first call in Hamburg as an LNG-powered vessel is scheduled for autumn 2020.