“A great way to start a maritime career”

Supporting the education and training of new talents have always been key commitments for Gard, as reflected in the Claes Isacson Scholarship, the long standing and recently revitalised IML Gard Fund, and in the group’s strong relationships with several universities around the world. Another testimony is Gard’s support of the Maritime London Officer Cadet Scholarship (MLOCS). Since 2018, Gard has sponsored a cadet through this scheme, thus enabling a young student to complete a three-year program combining academic studies with practical training onboard a series of commercial vessels.

“It has been great,” said Oliver Bailey, the first MLOCS ‘Gard cadet’. “It is really a great way to start a maritime career. The cadetship gives you practical skills and experiences which I think many employers will find highly valuable, whether you want to work at sea or on shore,” he adds.

Oliver has now completed his final exams and will soon start applying for a job. Already, he has more than 12 months of seafaring experience:

He was first on board the Arklow Forest, a general cargo ship sailing from Norway to the South of Europe; then on the Baltic Klipper, a cargo ship trading between Europe and South America; and later on the Fred Olsen Balmoral cruise ship, although this one “unfortunately was stuck alongside most of the time, due to the pandemic.” 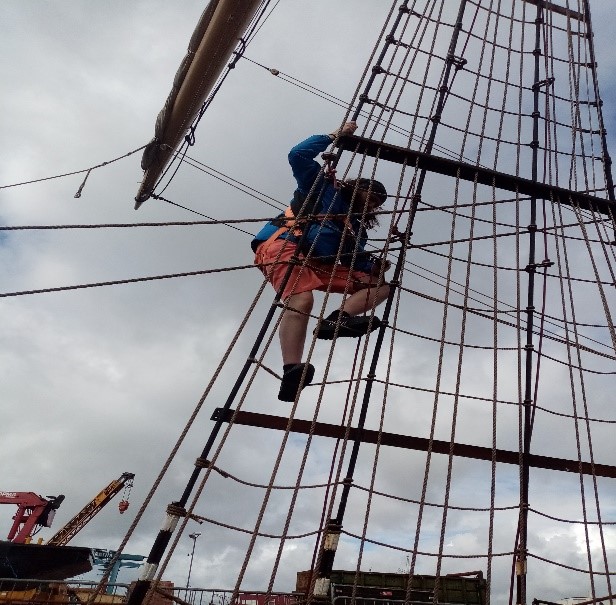 Oliver later spent time on board the Pelican of London, a tall sail training ship, before he eventually became part of the crew on board the Trinity House Vessel Patricia, formerly part of the British Royal Fleet, now used for navigation maintenance work around the British coast.

“That was a great ship,” he recalls. “They even had a separate royal section and everything. Of course, I had to ask if I could stay in the Queen’s cabin. If you don’t ask, you don’t get,” Oliver says with a smile.

Tim Howse, Head of Industry Liaison at Gard and himself a former Maritime London cadet, gives his praise to the MLOCS scheme and hopes more people will follow in Oliver’s footsteps.

“We need more trained and qualified seafarers, and we need young people from a diverse background to see the vast possibilities that are out there in the maritime industry – either at sea or on shore. MLOCS is a great initiative, and we should probably only do more to get more young people, of all genders, familiar with these kinds of opportunities. From a sponsor’s perspective, this is a hugely satisfying opportunity to contribute meaningfully to our industry, especially in the fields of diversity and inclusion,” Howse said.

Oliver for one is happy he took the chance. His next step now is to transition from ‘apprentice’ to full-time seafaring job.

“I am open for anything really; I am just eager to get started. Eventually, I would like to work on expedition vessels – if I could do that for a living, I would be over the moon. But of course, you have to start somewhere, and then you build from there.”

Oliver highlights how grateful he is for the sponsorship.

“The whole program has been great. It has also been a very personal experience – as a group of cadets you get to know each other – and you get to know yourself. You learn to push yourself and to commit. I think that’s valuable, whatever you decide to do next».
Source: Gard