The volume of secondhand boxship sales reported in the first eight months of 2017 totalled 0.75m TEU, having already accelerated beyond the previous annual record level of 0.64m TEU set in 2015. March 2017 saw a new record monthly total, alone equivalent to about 40% of the full year 2016 sales capacity total. How has the boxship sale and purchase sector evolved over time to reach this magnitude?

In TEU capacity terms, reported containership secondhand sales in the first eight months of 2017 increased by over 60% on the full year 2016 total. Whilst the volume of sales in some boxship sectors has remained fairly steady this year so far, there has been a significant increase in the volume of 3-8,000 TEU vessels sold secondhand. 0.26m TEU of ‘old Panamax’ tonnage has been sold secondhand and 0.13m TEU of 3-8,000 TEU ‘wide beam’ tonnage, a combined total of 0.40m TEU compared to 0.12m TEU in full year 2016. 0.18m TEU of capacity of 8,000 TEU and above has also been sold secondhand so far this year. 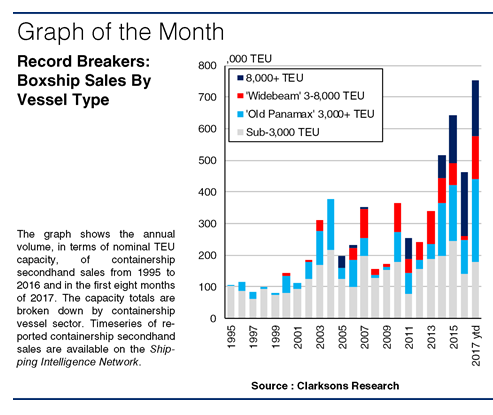 A number of factors have helped drive containership sale and purchase volumes to record levels. Recently, the opening of the new locks at the Panama Canal has led to ‘old Panamaxes’ becoming surplus to their owners’ requirements, whilst the financial collapse of South Korean liner company Hanjin Shipping also provided the S&P market with impetus (Korean sellers have accounted for 23% of boxship capacity sold secondhand in 2017 so far). The distress facing many KG-financed assets in Germany has also supported S&P activity in recent years, with 53% of capacity sold since start 2013 being sold by German owners. Meanwhile, the growing maturity of the containership sector as a whole has supported the evolution of a more liquid S&P market, and of course the rapid growth of the boxship fleet up to the 20m TEU mark has also helped.

One For The Record Books

If the rate of sales activity recorded in the first eight months continues for the rest of the year, the volume of boxship sales will get close to 6% of the start year fleet. This compares to an annual average of less than 3% in 2000-16, and puts the boxship S&P market in closer comparison to its bulker and tanker counterparts. So it’s taken a couple of decades, but the containership sector has finally attained a volume of sale and purchase activity of which to be proud. Records they say, are there to be broken, and in 2017 containership sales volume is one that’s already in the books.
Source: Clarksons

Previous: Which Sector should we invest in drybulk shipping, Kamsarmax?
Next: Dry Bulk FFA: Capesize Index Due for a Correction