A ‘double urgency’
The European Commission has responded to the global energy crisis caused by Russia’s war on Ukraine. It says there’s a ‘double urgency’ to transform Europe’s energy system and its reliance on the bloc’s dependence on Russian fossil fuels.

The Commission proposes to enhance long-term energy efficiency measures, including an increase from 9% to 13% of the binding Energy Efficiency Target under the ‘Fit for 55′ package of European Green Deal legislation.

It aims to diversify supplies further, and it’s considering the development of a ‘joint purchasing mechanism’ which will negotiate and contract gas purchases on behalf of participating Member States.

A massive scaling-up and speeding-up of renewable energy in power generation, industry, buildings and transport will accelerate the European Union’s independence, according to the proposals, which will give ‘a boost to the green transition’ and reduce prices over time.

The Commission proposes to increase the headline 2030 target for renewables from 40% to 45% under the ‘Fit for 55’ package.

Keeping track of leapfrogging ambitions by the European Commission
If you find it difficult to keep track of the many initiatives by the European Commission (EC) aimed at tackling the climate and energy crises, you’re not alone. And I’m sceptical about yet another increase in ambitions and just how companies can live up to the promises. Before we get to that, let’s recap where we are right now.

The EC first presented the Green Deal with the ambition for Europe to be the first climate-neutral continent by 2050. It lays out the main building blocks for sectors to transition to a net-zero economy by 2050 and defines an intermediate climate goal of 55% emission reduction by 2030. More details followed in July 2021 with the Fitfor55-strategy.

So far, so good. All these initiatives are focused on making the economy more sustainable. Security of energy supply was not an issue. And energy was affordable too.

But concerns about supply shortages started to drive prices to unprecedented levels. The EC responded in October 2021 with the ‘Energy Price Toolbox’.

And then Russia invaded Ukraine in February this year. The affordability of energy bills, and energy security, are now a top concern for politicians, households and board members of energy-intensive companies. The EC responded with the REPoperEU package, which aims to provide companies and households with affordable, secure and clean energy.

Today’s announcement builds on those already ambitious targets. And while those ambitions are laudable, it’s important we don’t lose sight of reality. Let me give you five ‘pinch points’ which make me sceptical about just how much can be achieved.

1.Relaxing permit procedures helps companies, but don’t forget about participation
The EC President, Ursula von der Leyen, made much in today’s announcement about speeding up permitting procedures. Projects that support the energy transition often take years to develop due to planning permission and compliance with environmental rules. That stands in sharp contrast with the ‘lightning speed’ that the EC envisions. Hence, the commission allows member states to designate areas where permits can be granted quickly as these areas serve ‘a public goal’. For me, these more or less ‘rule-free zones’ are the revolutionary aspect of the package.

It is likely, though, that environmental agencies and NGOs will protest against this and they might take it to court. They are likely to argue that solar fields and wind turbines could interfere with bird migration routes, and offshore wind farms could disturb marine life. Nature clearly also serves ‘a public goal’, and any loss of biodiversity only adds to that. It is far from clear how judges will balance these public goals. And it is likely to take time before the legal system has settled clear and practical guidelines for companies to speed up the transition.

Furthermore, the EC focuses on speeding up legal procedures, but gaining local support is equally important to accelerate the transition. Technologies such as biomass, nuclear power, carbon capture and storage, district heating networks, and onshore wind and solar fields often meet a lot of local opposition, particularly around urban areas. The New European Bauhaus initiative is part of the EU Green Deal and aims for more co-creation between citizens, experts, companies and government institutions. While co-creation might increase local support, it is not a guarantee that processes will speed up. And local opposition could easily increase as the transition accelerates and regional sceneries change faster than people are willing to accept.

2.Power grids are likely to remain a persistent barrier
Increasingly, the ambition to scale up renewables does not match the crude physics of power grids. Phasing out fossil fuels increases power demand, and on the supply side, renewables cause peak supplies at times when the sun shines and the wind blows. In many cases, we’re reaching capacity limits on transporting power over the grid.

As a result, power grids need to be extended on a large scale, but that takes years. Supply and demand need to be matched in smart ways, but power users are usually slow in changing their habits, for example by not powering their electric vehicles at home at 6 pm when they’re also cooking. And governments need to take a more strategic approach to grid connections. Governments are still a long way from designing a clear rulebook to allocate scarce capacity. It remains to be seen if it will come soon, as it requires tough choices between economic activities.

3.Companies struggle with labour and material shortages
And suppose that power grids are no barrier to the energy transition, how do companies find the resources to realise their ambitions?

The energy transition is very labour intensive. Electricians, installers, welders, fitters, plumbers, carpenters and the planners and project leaders in the office – they’re very hard to find. And if you do find them, other more lucrative job offers are often just around the corner.

Second, there are material shortages. Supply chain disruptions, for example, have impacted the availability of solar panels. And chip shortages have a negative impact on the supply of heat pumps. It is not uncommon for clients to have to wait months to have their order to be installed. Prices have gone up too, in some cases to such an extent that it delays the execution of the project.

Note that this is already happening at the current speed of the energy transition. These issues could get far worse if the transition needs to progress at ‘lightning speed’ and the war in Ukraine continues.

4.This can be a gamechanger for utilities
So far, utilities have weathered the Covid and energy crises well. Only smaller utilities suffer severely from high energy prices as they generally lack power generating assets and have to buy most of their power on the market to meet client obligations. Last year, 29 such utilities declared bankruptcy in the UK. However, most larger utilities could generate strong revenues from their power generating assets and power grid activities. Until now, most utilities have been able to pass on rising energy costs to their clients.

That could change for the worse if REPowerEU results in member states implementing price caps on energy prices for retail clients (households and SMEs). So far, many governments have compensated for higher utility bills through income support measures and by lowering energy taxes; both have no impact on utilities. But capping energy prices eats into the profits of utilities. That needs to be done wisely as utilities can only live up to growing investment ambitions with solid profit margins. Losses or bankruptcies among the larger utilities must be prevented as they are likely to add to market turmoil and backfire on the ambitions of the EC to speed up the transition to a net-zero economy.

5.Solar panels and wind turbines cannot substitute heating demand
My final point boils down to the reality check on the energy transition. Too often, it is framed in terms of solar and wind power as a solution to everything. But power demand only makes up one-fifth of total energy demand. The vast majority of energy demand comes from heating purposes. Solar and wind power cannot make much of a difference here as power electrons are far from a perfect substitute for gas molecules.

Yes, green hydrogen is a good substitute for gas, but that takes years to develop and scale up. Yes, biogas can substitute natural gas, but its potential does not come anywhere near the vast amounts of natural gas use. Yes, heat pumps can be a good way to warm new buildings, but most of the gas use is in old buildings where heat pumps are the second-best option. And yes, district heating networks are a good way to utilise otherwise lost heat, but they too take years to develop.
The Netherlands is a case in point. It currently uses 40 billion cubic metres (bcm) of natural gas per annum domestically. The Dutch have very ambitious targets for the energy transition towards 2030. Still, hydrogen and biogas targets can only substitute 2 bcm of natural gas each. Heat pump targets can save 1 bcm, energy savings by energy-intensive companies only 0.6 bcm. And new district heating networks add another 0.5 bcm. That makes a total of 5 bcm by 2030, which is a meagre 12% of total natural gas use. Remember; by 2030! And only if these ambitious targets are met.

Such examples always make me realise that the real challenge is in transforming heating demand, not power demand. REHeatingEU would have been a better name instead.

Heating is the main purpose of energy use, not power generation
Total energy consumption in Europe per energy use in 2019 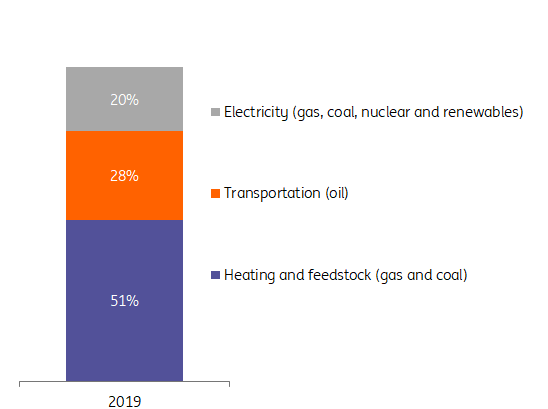 Europe is again taking another leap in its ambitions to transition to a net-zero economy and wean itself off Russian gas. In itself, that is a good thing, but it remains to be seen whether companies can live up to the challenge. It is relatively easy to put solar panels on the roof of an office or company outbuilding or to install a wind turbine on a production site. Greening the heating demand is where the real challenge lies. Despite good intentions and talk of moving at ‘lighting speed’, this is still likely to remain a disappointingly slow process.
Source: ING