A Tricky Start? Putting The Seasonal Slide In Context

The first quarter of the year is often a seasonally weak period for the shipping markets, and 2019 so far has proved no exception. Although the ClarkSea Index has risen by 13% y-o-y so far this year, it still fell by over 30% from multi-year highs in late 2018 to below $10,000/day by mid-February. Against a backdrop of building demand risks, how severe has this year’s seasonal slide been in a historical context?

Back in Q4, the ClarkSea Index, our weekly indicator of earnings in the main vessel sectors, was rising firmly and by mid-December topped $16,000/day. However, the market quickly lost ground into the new year, with the index falling to $9,767/day in mid-February, 40% below the December peak, with the average in Q1 to date standing at just $11,893/day, 18% lower than the Q4 2018 average (but still up 13% year-on-year). 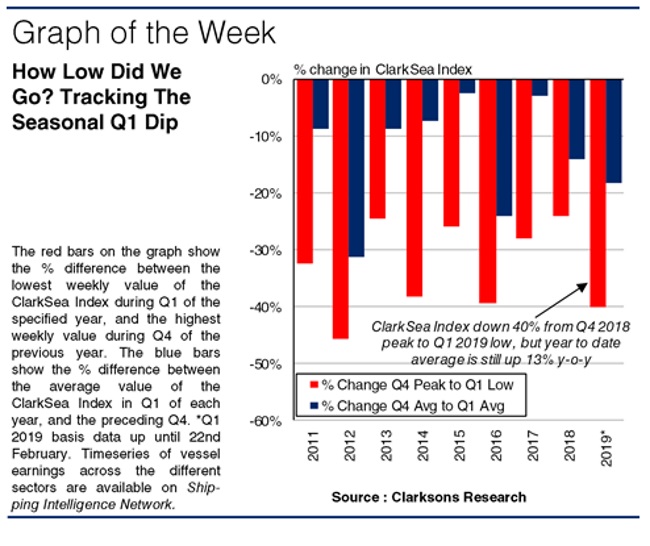 Of course, seasonal trends are key drivers here, with Q4 often the quarter of the year with the strongest earnings (see SIW 1357), supported by increased trade in energy commodities in the northern hemisphere winter, and by higher mine output in key regions. Conversely, the early part of a year can see disruption to mining activities from adverse weather, including in Brazil, Australia and Indonesia. However, specific factors are always at play too, with January’s record tanker deliveries and recent demand disruptions (such as the Vale dam collapse, China’s coal import restrictions and continued limited US-China trade in some commodities) unlikely to have helped matters.

Getting The Low Down

Comparing the average level of the ClarkSea Index in Q1 with the average in the preceding Q4 suggests a similar conclusion. In all years featured on the graph, the Q1 average has been lower than in Q4, so a weak start to the year is clearly a regular pattern. The fall in Q1 2019 to date (-18% q-o-q) was sharper than the decrease in the past two years (-14% and -3% respectively), as well as the average in the last decade (-13%), although with four weeks of Q1 2019 left to go the figures could improve. But again, both 2016 and 2012 saw a more significant deterioration.

So, it seems to have been a tricky start to 2019. However, a weak Q1 is a regular feature of the shipping markets, and the trend seen this year is perhaps not really outside of the ordinary given historical market performance, whilst y-o-y gains have also been made. Of course, what this analysis doesn’t show is where the pain has been felt, with tanker and boxship earnings steady q-o-q, whilst bulker earnings are down 35% (a similar drop to early 2015 and 2016). It also doesn’t show where the markets may end up later in 2019, but in this volatile industry, ‘twas ever thus’. Have a nice day!
Source: Clarksons