The ten new ferries will be operated by the public ferry company Transtejo, S.A. and will replace the existing fleet serving this route when they enter service between 2022 and 2024. In addition to energy storage, ABB will deliver a fully integrated electric power solution and an integrated marine and propulsion automation system. The fleet renewal project represents a significant commitment by Lisbon metropolitan planners to accelerate the introduction of emissions-free public transport solutions. Financial details of the contract were not disclosed.

Increased electrification of transportation, including inland waterway transport, will play a key role in helping Portugal achieve carbon neutrality by 2050. According to the national 2050 Carbon Neutrality Roadmap, the transport sector aims to achieve 98 percent reduction in greenhouse gas emissions compared to 2005, by strengthening the role of the public transport system and replacing current fossil fuel means of transportation with a mainly electric fleet.

ABB estimates that replacing the ten ferries operating on the Tagus river from diesel power to all-electric integrated power solution is expected to cut about 6,500 tons in CO2 emissions every year. This is equivalent to the annual carbon dioxide emissions generated by around 1,400 passenger cars annually.

“Cutting greenhouse gas emissions are top priorities in urban planning. Today, the technologies chosen for fast ferries operating so close to the heart of the city must be clean and green, as well as proven in terms of safety and reliability,” said Antonio Pacheco, Director of GRP Division, Astilleros Gondán. “ABB has been selected both on the grounds of energy efficiency and its extensive experience in delivering all-electric and hybrid propulsion solutions to the ferry market.”

“Operators serving inland waters have been among the pioneers of zero-emission propulsion, and we are truly honored that ABB’s technology will support the sustainability goals of one of Europe’s great capitals,” said Juha Koskela, Division President, ABB Marine & Ports. “This project is another important industry milestone for zero-emission propulsion, showing that proven technology is available today to serve future needs on sustainable fast passenger ferry transport.”

The new ferries, which will be pivotal to Lisbon’s public transport system, will be powered by battery packs with a total capacity of 1,860-kWh each. ABB’s initial contract covers the fully integrated electric power solution and an integrated marine and propulsion automation system for all ten ferries and the battery pack for the debut vessel of the series. ABB’s award-winning Onboard DC Grid™ power distribution system will ensure that the battery output is delivered to the ferry’s subsystems in the most optimal way, as well as enable safe integration and reliable operation of other propulsion system components. The overall power setup will be controlled by ABB’s Power and Energy Management System (PEMS™), which will also increase fault tolerance and provide a high degree of reliability while ensuring the maximum lifetime for the batteries. 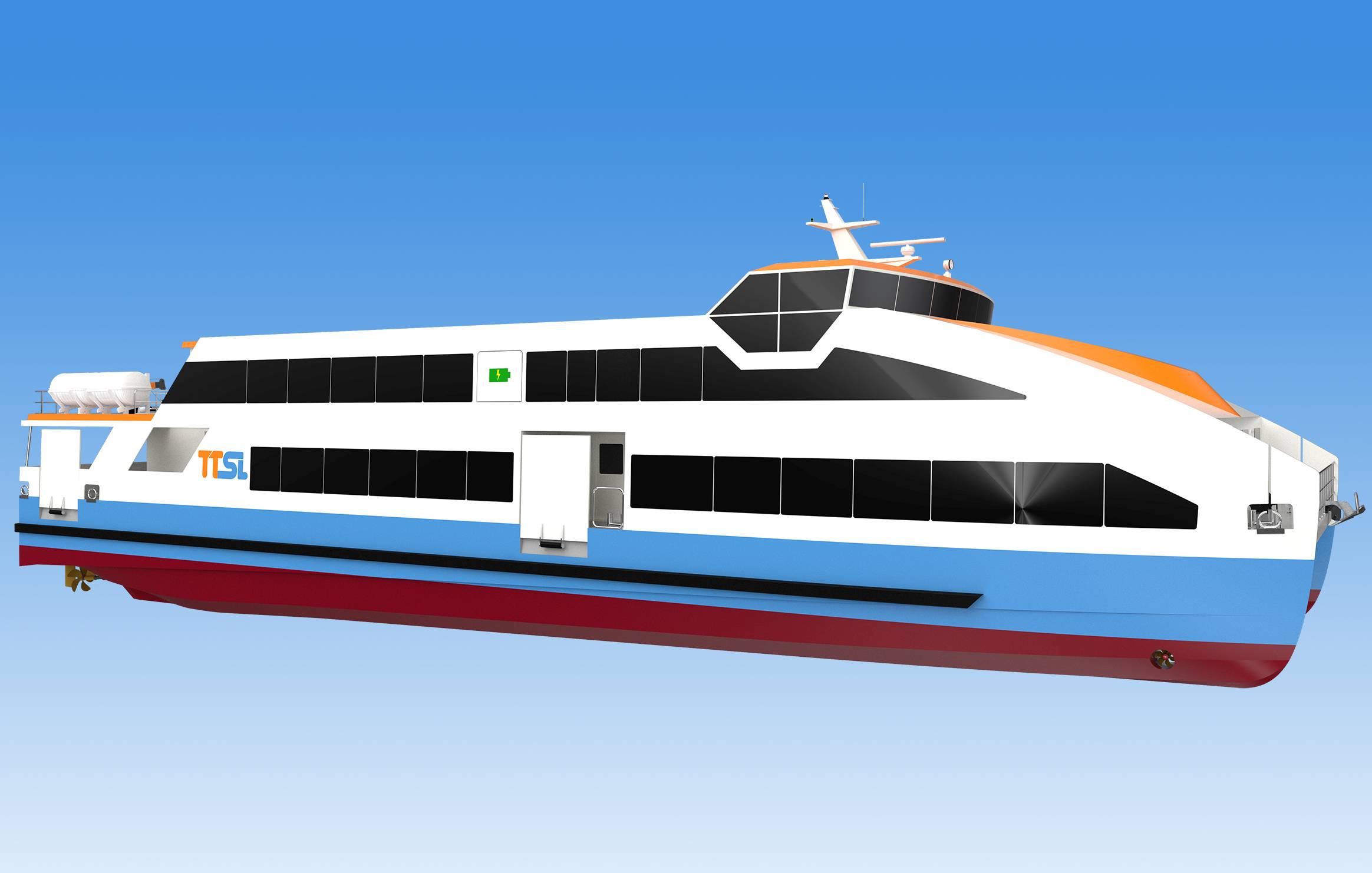 The 40-meter ferries will each have capacity to carry up to 540 passengers on three key routes linking Lisbon to Cacilhas, Seixal and Montijo on the south bank of the Tagus river. They will have a service speed of 16 knots and a maximum speed of 17 knots.

With the International Maritime Organization targeting a cut in annual emissions from ships of at least 50 percent by 2050 against 2008 levels, the all-electric ferry project represents a significant contribution to sustainable shipping by the city of Lisbon. Ferry industry association Interferry estimates that the sector transports over 2 billion passengers worldwide every year, with electric propulsion considered a proven technology that can reduce emissions at global scale.

Data from the Maritime Battery Forum indicates that over 130 battery-powered ferries are already in operation, and 90 more are on order. In line with its strong presence in vessel electrification, ABB has announced all-electric ferry projects with P&O Ferries, Washington State Ferries and Busan Port Authority in South Korea within the last nine months.

ABB (ABBN: SIX Swiss Ex) is a leading global technology company that energizes the transformation of society and industry to achieve a more productive, sustainable future. By connecting software to its electrification, robotics, automation and motion portfolio, ABB pushes the boundaries of technology to drive performance to new levels. With a history of excellence stretching back more than 130 years, ABB’s success is driven by about 105,000 talented employees in over 100 countries.
Source: ABB