Addressing bioinvasions – GloFouling project sets to work in the Pacific

In a spate of activity since its formal launch in March, the initial phase of the Glofouling Partnerships project is now well and truly underway with a series of technical workshops in the Pacific. The key message delivered to participants was that once introduced, marine invasive species can be hard to eradicate – and invasive species represent a potential major threat to the Pacific Ocean’s biodiversity and the ecological integrity of Small Island Developing States. The GEF-UNDP-IMO GloFouling Partnerships project aims to protect marine biodiversity by addressing bioinvasions by organisms which can build up on ships’ hulls and other marine structures.

Participants from South Pacific countries took part in a five-day regional workshop (3-7 June) in Suva, Fiji. This provided an opportunity to outline the main instruments which aim to prevent the spread of invasive species and address fouling on ships: the Ballast Water Management (BWM) Convention, the Anti-Fouling Systems (AFS) Convention and the IMO Biofouling Guidelines. Implementation of these conventions and guidelines can help prevent the transfer of invasive aquatic species into the Pacific region.

During the workshop, site visits to a dockyard in Suva provided an opportunity for participants to see at first hand hull cleaning/painting, and to see where fouling can occur in niche areas such as sea chests, bow thrusters or propeller shafts. 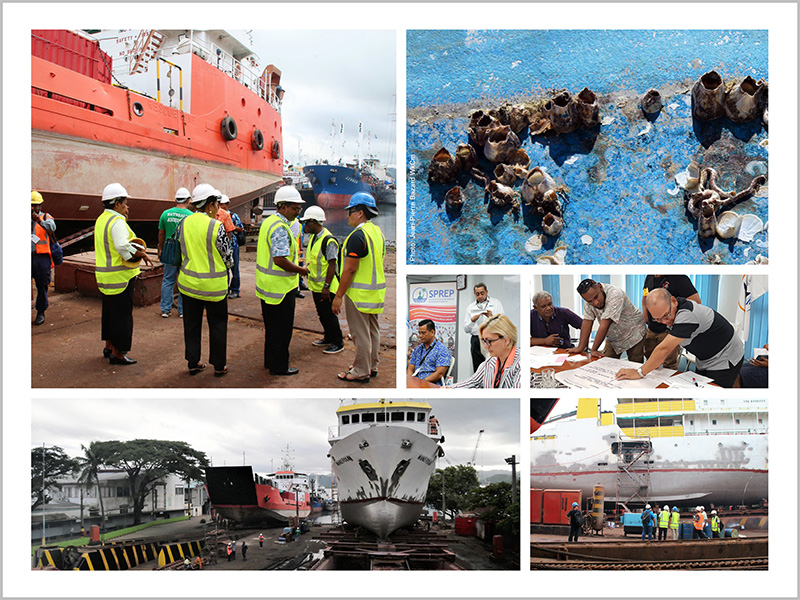 Fiji (10 June) and Tonga (12-13 June) – two of the 12 Lead Partnering Countries (LPCs) of the GloFouling Partnerships – hosted national workshops to review the programme of work and begin establishing national task forces. Both national meetings were attended by representatives from a wide range of government institutions and the private sector, such as the ministries of environment, fisheries, transport and infrastructure, port authority, biosecurity, port state control officers, dry docks, shipping agents and operators. Strong support was provided by the Australian Department of Agriculture and Water Resources. One of the exercises of the participants was to review the institutions and stakeholders that should be contacted to take part in their National Task Force, to be set up in the coming months. The role of the national task forces will be to oversee the development of a strategy and action plan to implement IMO’s Biofouling Guidelines and best practices for other maritime industries.

The GloFouling Partnerships will organize similar national workshops in the remaining Lead Partnering Countries in the coming months.

Port of Newcastle has become the first port in Australia or New Zealand to be certified by EcoPorts, the global environmental and sustainability standard for the ports sector