In the run-up to IMO2020 doubts existed whether there would be enough VLSFO available to meet demand, while HSFO was thought to remain in abundance. The reality however is very different, with the corona virus putting a cap on bunker demand, the growing oversupply of VLSFO and a relative HSFO tightness and availability concerns have become the new reality. As the scrubber fleet continued to grow, reports of HSFO non-availability started to appear. With certain regions and ports currently not offering HSFO, owners and operators of scrubber tonnage may experience difficulty procuring HSFO and need to shift to more advance bunker planning.

Scrubber vessels, HSFO supply and demand
In the main shipping sectors, including tanker, bulk, gas, container and cruise, the share of scrubber vessels is relatively low by number, at 4%, and slightly higher by deadweight, at 10% – meaning fewer stems but larger volumes per stem. Due to this, many suppliers prefer not to stock HSFO for now. However, as seen on Figure 1 scrubber vessel operations are spread globally and, while a share of HSFO demand is linked to term contracts, the majority of scrubber vessels procure bunker fuel on the spot market. 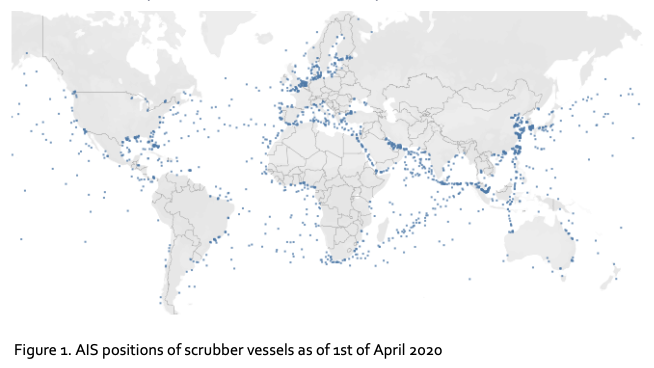 The mismatch between the global operation of the scrubber fleet and the ports with HSFO supply has created difficulties for the owners and operators of scrubber tonnage when it comes to HSFO procurement. Figure 2 shows the global number of HSFO spot stems in Feb-Mar 2019, which cover most ports, hubs and regions. 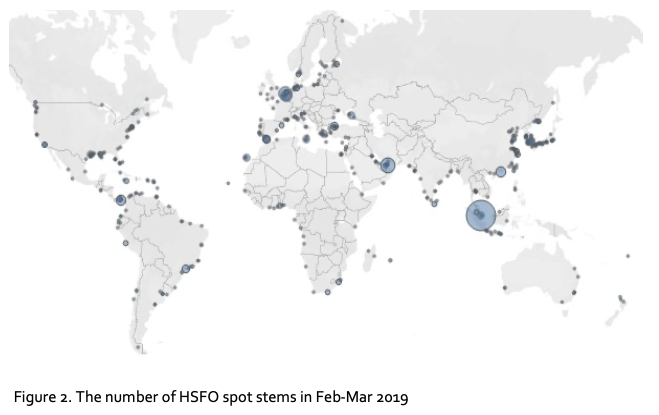 Looking at the past couple of months (Figure 3), the picture is very different with South America, West Africa, Black Sea, India, Australia and New Zealand are among the regions with little or no HSFO availability. 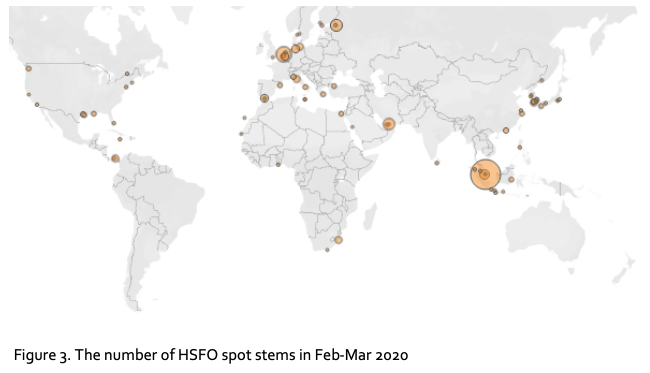 Even with HSFO available in major hubs, the number of suppliers have decreased sharply. In some locations out of many suppliers present, only one or two carry HSFO stock and delivery slots can often get booked quickly. At the moment, one half of the scrubber orderbook has been installed. Assuming most of the remaining orderbook is put into service (and currently it is hard to see many new orders placed), it will likely still not be enough to change the position of HSFO in the global bunker market so the expectation is for continuing difficulties with sourcing HSFO, at least in the near future.

Therefore, owners and operators of the scrubber fitted tonnage should plan HSFO bunkering well in advance where possible and we recommend the following based on the recent HSFO buying experience:

• availability and competitive pricing are more likely for enquiries with lead times of 7 or more days
• enquiring for HSFO not only in hubs but also smaller ports, which could at times be more competitive on pricing and have better availability
• as the VLSFO/HSFO delivered spread has narrowed and on certain occasions gone close to single digit figures, it is worth checking both VLSFO and HSFO prices adjusting for the difference in calorific value and additional scrubber consumption when deciding which grade to buy

Overall, current HSFO availability and pricing have clearly proved many forecasts wrong. In this situation owners and operators of scrubber tonnage can clearly benefit from more advance planning and access to transparent pricing and availability information.
Source: Intergr8 Fuels

Previous: Bank of France Expects a 6% GDP Contraction in 1Q
Next: Ships’ Sales Difficult to Proceed Amid Pandemic