New global export orders (goods) fell for the first time in two years, as the Global PMI indicator dropped to 49.7 in September from 50.3 in August, ending two years of solid trade growth. Moreover, the rate of expansion in production fell to a two-year low at 52.4. If we put this into a longer-term perspective, global trade grew quite slowly between 2012-2016. Is this a return to the ‘new normal slow growth’ environment? It could very well be. After two years of brighter prospects for economic growth and trade, prosperity has been brought down by adverse trade politics.

The trajectory is already being felt by the shipping industry. According to IHS Markit, overall ‘business confidence’ for the year ahead fell to its gloomiest level for two years. This suggests that global economic growth may weaken more in coming months and quarters. 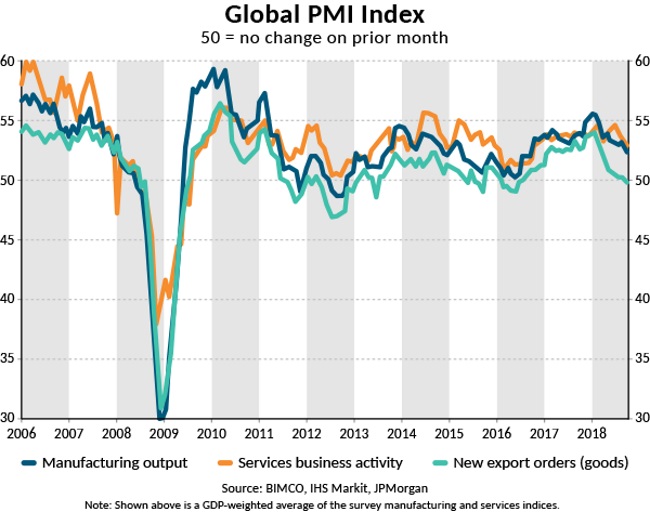 As the risks highlighted by the International Monetary Fund (IMF) in its World Economic Outlook report back in April have now materialised (among them an escalation of the trade war), the IMF now expects global economic growth to stall in 2018 and 2019, staying unchanged from 2017 at 3.7%.

The ongoing trade war, which is impacting the shipping industry in many aspects, takes its toll onshore as well.

Looking at the forecast for real GDP growth in the next five years, it’s clear that the growth of advanced economies will peak at 2.4% in 2018, followed by a slide down to 1.5% in 2023. 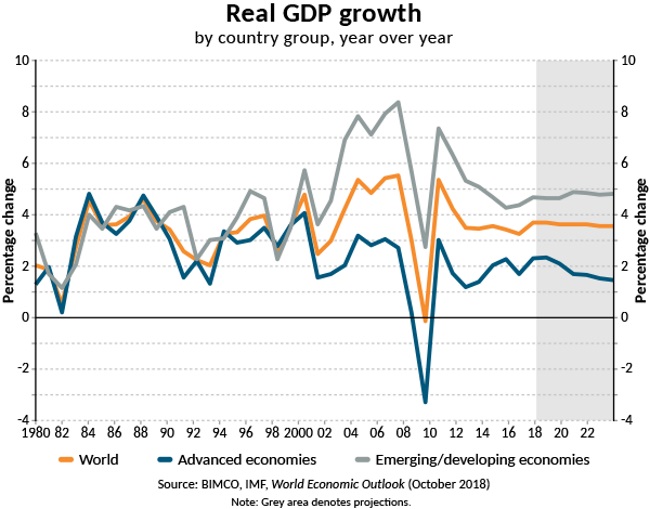 This naturally brings a challenging trade outlook for the shipping industry – on both sides of the world.

Europe
As mentioned in our last report, EU manufacturing output stabilised in July and has remained unchanged since. Despite this, the IMF revised down its estimate for GDP growth in Germany and France for 2018 and 2019. This comes on top of downward revisions in the IMF’s April issue of World Economic Outlook too.

In short, all the early-year optimism has now evaporated.

On trade policies, the European Union (EU) is currently in the final stages of negotiating the terms of Brexit. On a more positive note, the EU has launched negotiations with Australia and New Zealand aiming to strike a comprehensive trade agreement. Trade in goods between EU and the two counterparties amounted to €56.7bn in 2017 (USD 64.5bn).

US
The normalisation of monetary politics continues in the US as interest rates are raised. On 26 September 2018, the Federal Reserve (the Fed) hiked interest rates by 0.25 to reach 2.25%.

It forecasts US GDP growth of between two and three per cent, the unemployment rate, currently at 3.7%, to reach 3.5% in 2019-2020, and that there will be little inflation or deflation. A sweet spot in economic terms.

As of early November, the US had placed tariffs on goods worth USD 250bn, in addition to other trade barriers put in place for steel and aluminium. This most recent round is particularly harmful to containerised imports from China. BIMCO analyses the trade war impacts on the shipping industry and reports on it regularly.

Asia
Asia – excluding Japan and China – appears to be faring better right now than its two giants (Japan and China). But size does matter and, from a shipping perspective, we need the world’s second- and third-largest economies to do well in order to thrive.

Being entangled in a trade war with the US, China has added tariffs to goods worth USD 113bn during 2018. As opposed to the US, China seems to respond to extra tariffs by reducing imports swiftly and dramatically. This goes for imports of crude oil, soya beans and many other commodities, some of which are – and others that aren’t – an official part of the trade dispute.

In Japan, fewer new export orders have been received in August and September, while October reversed that. The decline in trade has been most evident in Asia, as new export orders have fallen in six of the past seven months – April to October (source: JP Morgan/IHS Markit). In September, China’s exports fell the most since February 2016; they have now fallen for seven straight months (source: Caixin/IHS Markit).

South Korea is struggling to maintain growth. The country is about to face its lowest GDP growth in 2018 (2.8%) since 2012 (2.3%) – a downward spiral that is set to reach 2.6% in 2019. The massive state aid given to local shipyards and shipping companies seems like a measure to counter this slide. That measure is not welcomed by fellow shipbuilding nation Japan, which filed an official complaint at the World Trade Organization (WTO) in mid-November 2018.

Outlook
Global economics are facing plenty of headwinds – still growing, but only to the same extent as last year and with plenty of new trade barriers being set up.

For shipping, this could also mean the demand growth rate is peaking right now, with only limited upside left. If that is the case, owners and operators must prepare for this risk to materialise. As a result, focus on managing fleet growth will always be at the centre of risk management for the industry. Nevertheless, transported volumes have never been higher than they are today.

At the end of October, rumours emerged that the US may put extra tariffs on all the goods that are currently left out of the trade war. This could result in the addition of USD 257 billion of Chinese goods if near-term talks to resolve the trade dispute fail.

In September, worldwide manufacturers reported the first drop in export orders in more than two years, according to the PMI by IHS Markit. This is the culmination of a year that has turned sour. The main exporters in Asia – Japan and China – are hurting the most. China’s exports (manufacturing PMI new export orders) have now fallen for six months in a row.

This could result in a low demand growth rate on the transpacific container shipping trade lanes, to the extent that this is caused by the trade war. 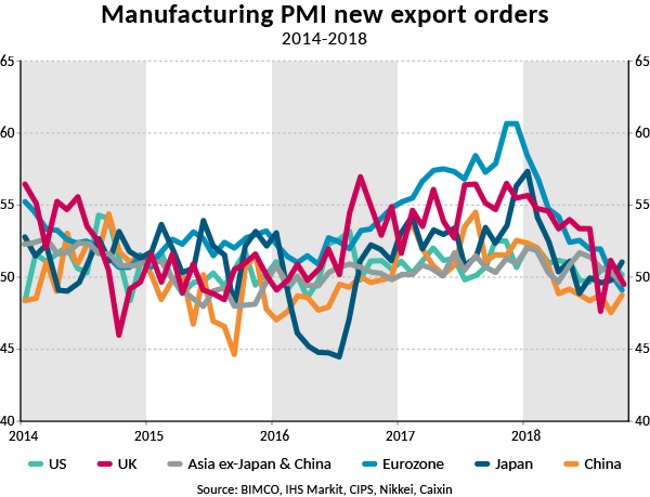 The negative developments have an impact on global employment of people too, where the employment growth rate faded to reach the lowest level for more than a year. This may result in a stalemate for employment. In September, the unemployment rate in the euro area was 8.1%, in EU28 6.7%, the US 3.7% and Japan 2.3%.

WTO is forecasting that trade volumes will continue their downward trend in 2019. Imports into developed, as well as developing economies, are set lower, at 3.0% from 3.2% and 4.5% from 4.8% respectively. Only South and Central America are expected to increase their imports.

Brazil, having fared poorly for several years, is hoping for better days following the election of a new president. Time will tell if the change at the helm will also bring prosperity. For the shipping industry, Brazil has been a mixed bag in recent years.
Source: Peter Sand, Chief Shipping Analyst, BIMCO