After The Oil Price Rally, New Opec+ Cuts Are Needed To Prop Up Oil Prices

As oil prices approach $70 a barrel, Rystad Energy expects that a short-lived price rally through the first half of 2020 will then lose momentum and be replaced by a need for additional production cuts by Russia and the cartel of oil producing countries, OPEC.

“We retain our bullish stance for the second half of 2019 and first half of 2020 as we anticipate OPEC+ to extend production cuts through 2019, while we also expect bullish oil market effects due to the introduction of IMO 2020 regulations on sulfur content in marine fuels,” says Bjørnar Tonhaugen, Head of Oil Market Research at Rystad Energy.

“However, the effects of the IMO 2020 ‘scramble’ will likely be short-lived. By 2021 there will be renewed pressure on Saudi Arabia and OPEC+ to cut production again, or risk a new down-cycle in oil prices.” 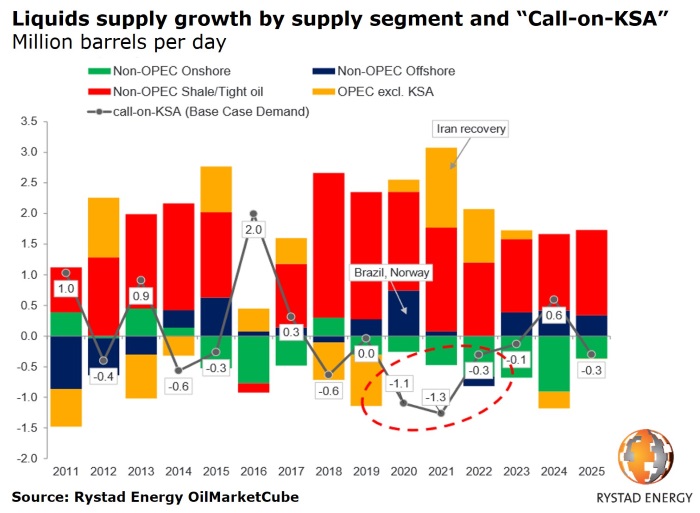 Rystad Energy, the independent energy research and consulting firm headquartered in Norway with offices across the globe, says US shale production is causing a “recurring dilemma” for the OPEC countries.

“We tentatively expect a correction in prices, possibly already from the second half of 2020 and into 2021, as the IMO effect fades. Nevertheless, the biggest issue is the ability of the US shale industry to grow by 1.4 million bpd annually between 2020 and 2025 in our current base case, which is enough to keep up with global demand, causing a recurring dilemma for Saudi Arabia and OPEC,” Tonhaugen remarked.

Rystad Energy forecasts that the upcoming IMO 2020 sulfur limit regulations for marine bunker fuels will have short-lived consequences for the world’s oil markets. We conclude that despite around 2,800 vessels having so-called scrubbers installed on average in 2020, and refiners gearing up and readjusting to meet the increased low sulfur fuels demand (LSFO, MGO) while also getting rid of most of the high sulfur fuel oil (HSFO) currently produced, there will still be a significant 0.6 million bpd deficit in marine gasoil in 2020.

“This could have reverberations for the whole fleet of diesel-driven vehicles. Global diesel prices – also at the pump – could be higher in 2020 than many expect.”
Source: Rystad Energy