AIS and the Main Categories of AIS Challenges

In spite of errors and weaknesses the AIS in combination with low orbit satellites and affordable connectivity with low latency, will create a land of opportunity for the marine traffic and commercial shipping. The race has already started, so therefore we think everyone working in the maritime industry needs to have some basic AIS knowledge.

Automatic identification system or AIS for short and the AIS technology is an old technology and operates within the VHF radio band. The marine AIS was introduced to prevent collisions among large vessels at sea where the vessels were outside the range of shore-based systems. From 2002 the IMO Convention for the Safety Of Life At Sea (SOLAS) Regulation V/19.2.4 made it mandatory for all vessels more than 300 GT trading in international water and for all passenger ships no matter if size, to carry AIS Class A equipment onboard.

The AIS system uses time-division multiple access (TDMA) radio access scheme which creates significant technical issues for the reliable reception of AIS messages from all types of transceivers. One fundamental challenge for AIS satellite operators is the ability to receive very large numbers of AIS messages simultaneously from many vessels within a limited area. However, this is something many commercial companies are looking into together with the marine industry.

Today AIS is used for many different purposes

In Maritime Optima we are using AIS as one input source for vessel data, statistics and economics, vessel and cargo tracking, calculations and several optimizing cases and predictions. We combine input from different data sources, and the main data sources are satellite data, public data and user generated data. We aim to make an efficient decision-making system for the maritime industry.

There are three different modes of operation within the AIS system

All three modes are in operation on today’s merchant fleet.

The static and voyage data with a Class A AIS is sent every 6th minute and the frequency of the dynamic data is decided of the speed of the vessel.

The AIS data is not accurate, the information might be misinterpreted, vessels might deactivate their AIS etc, so in order for shipping analysis and software products to provide relevant information they need to combine the AIS data input with other data sources in a structured machine-readable context.

AIS might also be turned off and there might be legitimate reasons to turn the AIS off; for maintenance, in waters where the vessels risk piracy attacks. There might also be other reasons for the vessels to turn off their AIS, mostly those reasons are related to trading in sanctioned countries and illegal activities.

Away from land based AIS receivers we have to rely on satellite receivers. Even with a large satellite fleet such as operated by ORBCOMM a ship may sail for 2-3 hours between observations. In congested areas the time between observations may increase due to interference; two vessels that are below each other’s horizon may broadcast their signals in the same time slot making it impossible for the satellite to separate and decode signals from these two vessels.

In Maritime Optima the result may show up as long straight lines in a vessel’s tracks. Here is an unfortunate example of a vessel coming out of the extremely congested Malacca strait:

Vessel destination and ETA, broadcast with a vessel’s static information, are entered manually by the crew. Although regulations recommend using 5 letter UNECE port codes to designate vessel destination – eg NOOSL for Oslo, Norway – this is not enforced or even widely adopted. Making a software system guess where a vessel is really going based on its AIS destination text is challenging, and even the best system will sometimes guess wrong.

Here is an example where even a human would not be able to make the right guess. This vessel’s destination says “IN MAA” which is Madras, India. Which is where the vessel has come from: 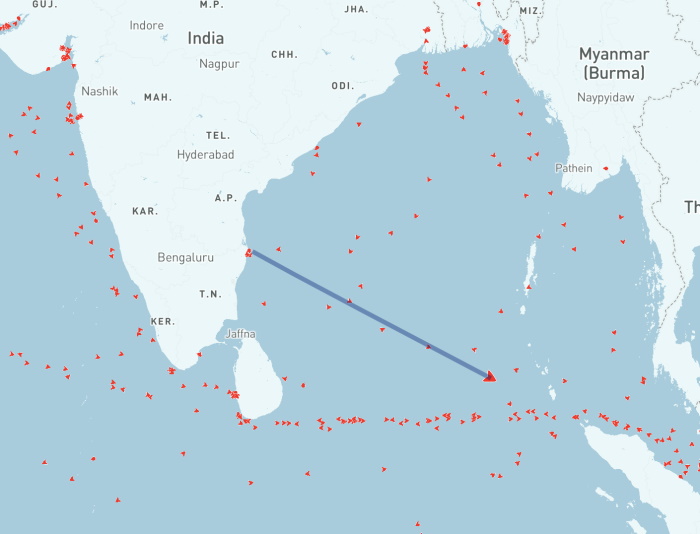 Information that is manually maintained is sometimes not updated in a timely manner. Even on a single vessel different watch officers may do things differently; a ferry may broadcast all port arrivals during one shift but not during the next. The typical errors of omission are:

Here is an example of a vessel that seems to pretty consistently neglect to update its navigational status. In Maritime Optima this shows as a long and convoluted track back to the last port where it actually reported to have moored: 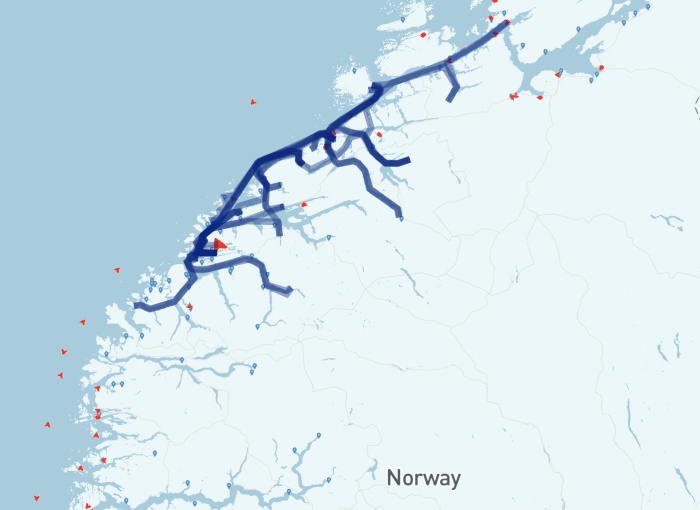 This is perhaps the most serious issue. MMSI numbers are globally unique radio identification numbers assigned by flag state authorities. Transmitting AIS messages for an incorrect MMSI is a violation of the VHF radio license. Still this happens surprisingly often. When an incorrectly configured AIS transmitter sends messages for an MMSI that is also used – correctly – by another vessel the result may be quite confusing.

If both transmitters are in the same geographical area this situation may cause navigational hazard. In Maritime Optima duplicate active transmitters may look to the user as if a vessel is jumping back and forth between locations far apart:

In this example a vessel has sailed from Togo, around West Africa through the Mediterranean and is in the Red Sea when this picture was taken. While the vessel was steaming South West from Togo another transmitter sent positional messages claiming that this MMSI was in Singapore. Maritime Optima have since implemented some algorithms to ignore the most extreme cases, but it is in general very hard to tell which messages to believe and which ones to disregard.

The new Norwegian satellite NorSat-3, launched successfully on the 29th of April 2021, will improve monitoring of ship traffic in the Arctic, and the NorSat-3 program will provide the global maritime industry with more accurate AIS data.

NorSat-3 is more advanced than its predecessors, because in addition to the AIS receiver, it is equipped with an experimental navigation radar detector (NRD) and will contribute to a more comprehensive image of the traffic at sea. Thus, the Norwegian Coastal Administration will be able to verify the AIS information and detect ships that are not emitting AIS signals.

Norwegian Space Norway, ORBCOMM, ExactEarth etc. are also testing out new and improved technologies called VDES: a two-way communication between satellites, ships and land. This technology will, together with the expansion of the low orbit satellite infrastructure, contribute to the development of a robust small-band network enabling a more accurate monitoring of the global merchant fleet.

You can read more about the Norsat-3 program here:
https://www.romsenter.no/News/News/Norway-s-new-satellite-detects-radar-signals-from-ships
Source: Maritime Optima