No new jetty has been built at Chattogram port for unloading goods from bulk carriers since independence, despite 45% incoming vessels being bulkers with more than 9% bulk cargo handling growth in recent years.

Businessmen claim that the Chattogram Port Authority is obsessed with capacity expansion for container handling – one of the major criteria for progressing in the international shipping port ranking.

This leaves bulk carriers with imported food grains, steels and cement raw materials to moor at the Chattogram port outer anchorage first, transfer a chunk of the goods to smaller vessels and then queue up for main port anchorage with a reduced draught. 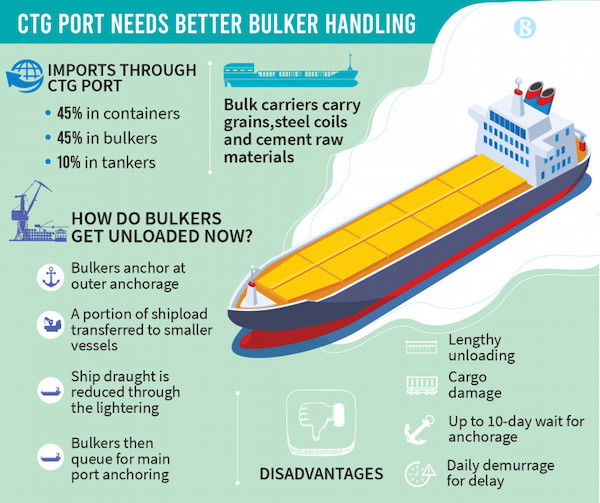 While many countries have dedicated and separate arrangements for container and cargo carrier handling, Chattogram port does not.

But as the bulk cargo handling arrangements at the port remain the same, bulkers often have to face cargo damages, more than 10-day wait for main port anchorage and daily demurrage for the delay.

Businessmen and shippers call for separate arrangements and new jetties for bulk cargo carriers to reduce the cost of business. They point out that the new jetty could be set up on the southern bank of River Karnaphuli, utilising the benefits of Karnaphuli tunnel. Apart from the Chattogram Port Authority, they said private entrepreneurs could also be engaged in the port capacity expansion.

“A port should have separate arrangements for handling containers and bulk cargoes. But I do not think anyone at the port authority thought about bulk cargoes in the last 50 years,” Amirul Haque, managing director of shipping and logistics provider Seacom Group, told The Business Standard.

According to international maritime ranking Lloyd’s List, Chittagong Port is rated 64th among the 100 busiest ports in the world. However, the rating is determined only on container handling.

In FY22, the port welcomed 4,231 ships and handled around 32.55 lakh twenty-foot equivalent units (TEUs) of containers.

According to the port data, about 45% of the ships bringing goods from different countries are container ships, 45% are bulk carriers and 10% are tankers.
For bulk carriers, businessmen said the port has reserved only those jetties of the General Cargo Berth with a draught of 8.5 metres. But jetties with 9.5 metres draught are dedicated for container carriers.

Syed Mohammad Arif, chairman of the Bangladesh Shipping Agents’ Association, said the capacity of the jetties at the General Cargo Berth is low as the berth is old.

He called for constructing new jetties and engaging the private sector if required.

Mohammad Omar Faruk, secretary of the Chattogram Port Authority, said that 75% of the bulk cargoes arriving at Chattogram port are unloaded by smaller vessels at the outer anchorage.