Yunnan province cuts supply
Aluminium smelters in Southwest China’s Yunnan province, which accounts for 11% of China’s aluminium output, have been required by the government to reduce their operating rates due to hydropower shortages in the drought-stricken province.

The smelters have been ordered to reduce the use of electricity by 15% to 30% from last week, which is expected to cut 800,000 tonnes to 1.6 million tonnes of aluminium production capacity.

The output reductions in Yunnan come after Sichuan smelters cut 920,000 tonnes of capacity in August, accounting for 2% of China’s total.

The duration of the power cuts in Yunnan has not been officially announced yet but the market believes it will depend on how quickly weather conditions improve in the region.

Chinese aluminium output climbs to record highs
Still, China’s aluminium output has held up despite the energy crunch. The country’s primary aluminium production hit a record in August surging 9.6% year-on-year to 3.51 million tonnes, according to data from the National Bureau of Statistics, beating the previous high in July. Output in the first eight months of the year gained 2.1% to 26.47 million tonnes.

However, output could have been constrained over September due to the ongoing power rationing in Yunnan province.

China’s exports of unwrought aluminium and aluminium products have also risen in 2022 – up 31.5% so far this year versus a year earlier to 4.7 million tonnes – and are likely to rise further in the fourth quarter as European and the US producers have been slashing capacity over the past 12 months amid the worsening energy crisis following Russia’s invasion of Ukraine.

In August, China exported 540,400 tonnes of unwrought aluminium and aluminium products, up 10.2% versus a year earlier.

On the raw material side, China’s alumina exports are also increasing, with annual shipments through August reaching 720,000 tonnes, from just 100,000 tonnes a year earlier as buyers in Russia seek alternatives after the war in Ukraine cut off their traditional supplies.

Several smelter cuts have already been announced across Europe since December 2021, including Alcoa’s San Ciprian smelter and Hydro’s plant in Slovakia due to high energy costs which account for about a third of aluminium’s production costs.

Further smelter closures and curtailments in production are highly likely with Europe heading into the winter months and the war with Russia raging on. 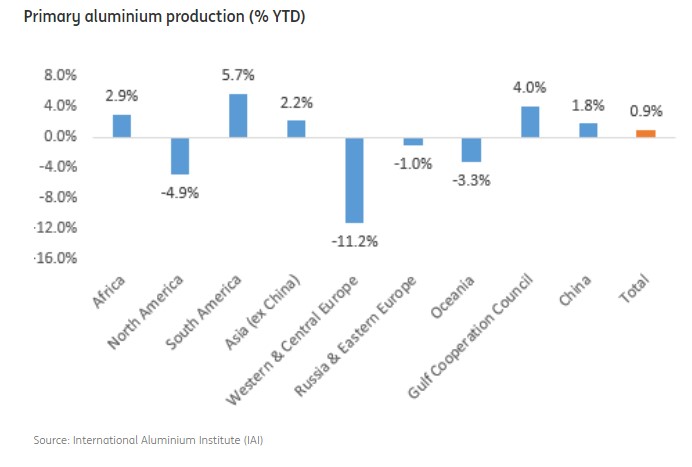 However, the Chinese economy started to show some signs of recovery last week. Industrial production climbed 4.2% on the year, faster than July and above the consensus, according to the National Bureau of Statistics’ latest data. Retail sales rose 5.4% from a year earlier, higher than expected and up from July.

China is also stepping up its efforts to boost its housing and construction sectors with more Chinese cities announcing credit support and subsidies for home purchases. Last week, China’s Evergrande Group removed most of its construction-project freezes as China enters its peak building season, which traditionally lasts until the end of October.

Still, China’s government and central banks’ stimulus efforts have been mild so far in relation to Covid-19 restrictions in the country. Data last week showed home prices declining for a twelfth consecutive month in August taking house price inflation down to -2.1% year-on-year.

LME prices stuck in a range
Despite high energy prices, weak demand has continued to outweigh any potential supply concerns with the market’s focus remaining more on the negative macro sentiment for now.

LME aluminium prices are now down more than 40% from their year-to-date highs of $3,849/t reached in March and are hovering around their lowest levels since April 2021 amid fears that Russian supply could soon emerge at London Metal Exchange warehouses in Asia.

Russian aluminium producer Rusal is reportedly looking to deliver some of its metal directly to LME warehouses in Asia, as it increasingly struggles to find buyers. It is suggested that Rusal could deliver a small amount of aluminium to LME warehouses initially. Increased flows could cause some issues. Firstly, a strong increase in LME inventories could put further pressure on prices, while there could also be a growing amount of aluminium in LME warehouses, which buyers are not willing to touch. This could potentially lead to a disconnect in prices. 2022-09-26
hellenicshippingnews...
Previous: Recession will be necessary to rebalance the oil market
Next: Ukraine ports have shipped around 4.7mn tonnes of food under grain deal