“America first”: What does it mean for global trade?

Many Europeans see the policies of US President Donald Trump as isolationist and anti-trade. Nevertheless, something they do not consider is that European tariffs are on average much higher than those in the US. Experts are anticipating a considerable increase in trade restrictions – but is the US the driving force here, or do we need to rethink global trade anew? On 4 July, the US Independence Day, three experts discussed the economic situation in the USA and Europe at the head office of Hapag-Lloyd on Ballindamm, right in the heart of Hamburg. Richard Yoneoka, US Consul General in Hamburg, opened the panel discussion by evoking the long-standing connection between Europe and the United States – and by mentioning that disputes with the respective sitting US presidents are also part of this history. At the same time, he also appealed to see this as the right time to negotiate in order to get to the bottom of the trade imbalance. Because “if we do not rethink our trade strategy now, we will have to do it at a later point in time – and that possibly under unfavourable conditions,” said Yoneoka. 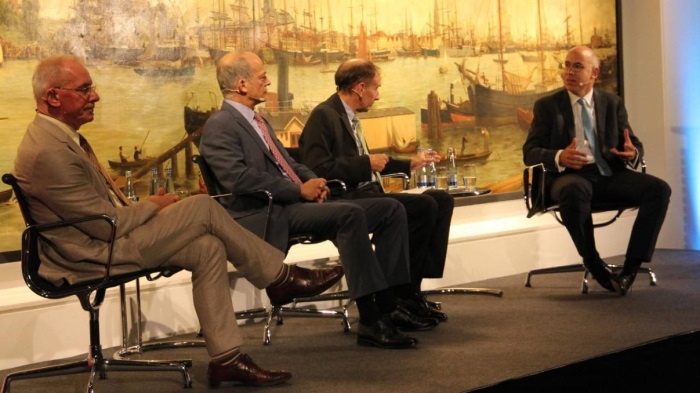 These were the theses of the participants:

“The USA’s real problem is its debt of approximately USD 20 billion. This debt cannot be satisfied through a modified trade policy alone. And yet this seems to be one of the set screws for the American policy at present time. However, I believe that the escalation we are currently seeing is necessary to find a solution to the problem.”

Peter S. Rashish, Senior Fellow and Director of the Geoeconomics Program of the American Institute for Contemporary German Studies (AICGS) at the Johns Hopkins University in Washington:

“Donald Trump’s administration is currently testing whether becoming less dependent on imports would be beneficial to the USA. They are trying something that no other US government has done before. We are therefore witnesses to a big experiment. Nevertheless, the social changes taking place cannot be explained through the economic situation alone. Rather, many changes in the job market and production are being catalysed by new technologies and digitalisation. In order to overcome this challenge, we do not need an ideology but rather a clear strategy.”

Professor Dr Jacques Pelkmans is a senior fellow of the Centre for European Policy Studies (CEPS) in Brussels and a professor at the College of Europe in Bruges. He also serves as advisor to the European Commission, the OECD, the World Bank, UNIDO, ASEAN and to governments in Europe and Asia:

“Europe is currently going through a difficult but also very fascinating period. The tariffs imposed on Europe by President Trump are, in my opinion, irrational and do nothing to solve the actual problem. However, Germany also reacted with irrational tariffs – affecting, for example, American cars, for which there is barely any demand. Trump’s irrationality is dangerous because it could put us in a dilemma like in the 19th century, when trade and foreign policy were intertwined with each other yet there were no global rules. On the other hand, we can find an example of constructive cooperation in the treaty between the USA, Europe and Japan to protect ‘intellectual property’ from theft by China.”