American ‘Backyard’ Wells, The Flexible 11% Of The Us Onshore Oil Output, Now Face An Inflexible Choice

About 11.4% of the total US onshore oil output in 2019 came from thousands of small micro-producing wells that are very often located in people’s backyards and have been kept alive for decades, securing a monthly salary supplement for their owners. These wells are called Stripper wells, they typically produce no more than 10 barrels of oil per day (bpd) and have been considered a flexible source of supply as production can theoretically be shut and restart more quickly than in other conventional large-scale operations.

In 2019 stripper wells accounted for about 1.2 million bpd of the total US onshore average output of about 10.5 million bpd. But this year, as the world faces the largest oil supply glut it has seen in modern times due to the Covid-19 outbreak and with an ongoing price war amongst the OPEC+, producers are much more wary of break-even costs, and will consider these relatively flexible supply sources as the first candidates to be shut-in.

Yet even more significant sensitivity is triggered when we move the oil price from $20 to $10 per barrel, as at this wellhead price level only 470,000 bpd of marginal output would be able to cover its cash costs and break even.

Although production at stripper wells is considered flexible, our analysis shows that this may be a misconception. While many of the smaller private operators may shut down their stripper wells in the current price environment, many of the strictly-regulated major operators will more often than not choose to keep production going, as the cost to permanently shut down these wells, which could range anywhere between $20,000 and $40,000 for each well, would be bigger than the losses they would suffer from keeping these wells in operation for the next few years. 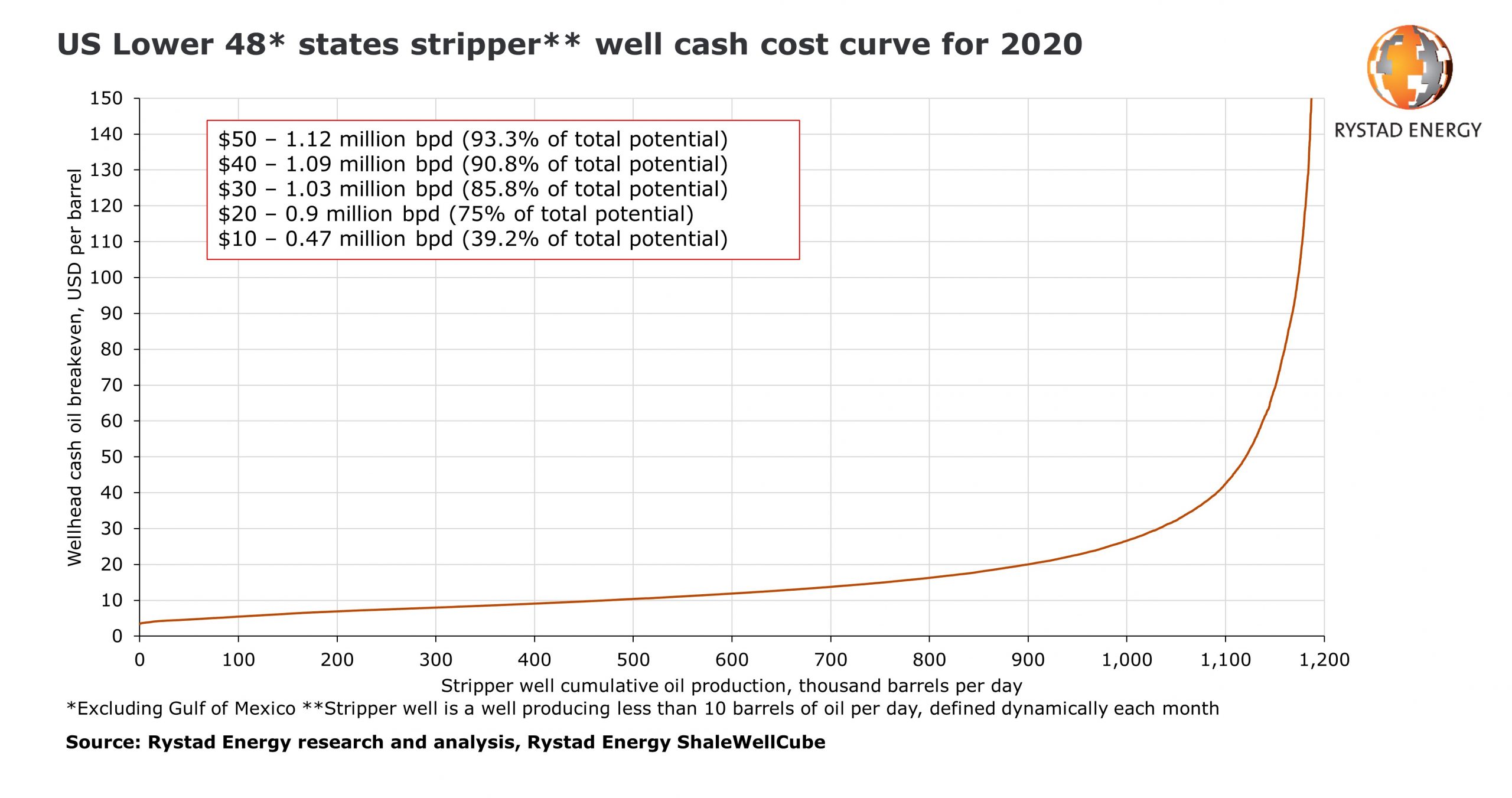 “The irony is that turn-off costs are often higher than the present value of the negative cash flows the operator would get from running the marginal well over the next five to 10 years,” says Rystad Energy’s Head of Shale Research Artem Abramov.

For example, if the oil price is $10 below the cash breakeven, a typical marginal well loses around $600 per month, or $7,200 per year. Thus, the operator of this well can keep producing for four more years before the loss would match the P&A costs of abandoning the well, without accounting for the discount factor.

As a result, the marginal wells operated by well-established public independents and supermajors may continue to produce. Historically, we have observed that when these operators shut down their marginal wells, it’s usually for good, with no plans to reactivate them when the oil price improves due to the high alternative costs and potential pressure loss impact from shutting and restarting these wells.

More than 50% of marginal well production is operated by private operators, including both private equity-backed players and hundreds of small independent producers and family-owned E&P businesses. Nevertheless, it is the public independents, with nearly 340,000 bpd, and the supermajors, accounting for 160,000 bpd, that command more than 40% of the total marginal production.

“During the downturn, operators have a natural tendency to delay P&A costs. Hence, stripper well supply may be less elastic and flexible than some people might think, and it might not be the source of supply that would help balance the market,“ adds Abramov.

Looking at the locations of these stripper wells, the type of activity that they represent and their operators, we can see that the Permian Basin has accounted for the largest share of total stripper well production. More than 440,000 bpd of Permian oil presently comes from marginal wells, with most of these wells producing from legacy conventional reservoirs.
Source: Rystad Energy