America’s biggest ports are still contending with record volume, indicating the country’s supply-chain woes are far from over

The nation’s largest ports handled more volume this year than through the same time period last year, a sign the supply chain challenges that wreaked havoc on consumers and retailers during the pandemic still haven’t let up. But there are signs port congestion is shifting from west to east and could even ease overall thanks to consumers slowing their shopping habits.

Total TEUs (20-foot equivalent units), which is a way to gauge overall port activity, recorded for this year through June, were 26.4 million compared to 25.1 million for the same time period in 2021. Despite the high level of activity over the past several months, experts anticipate fewer containers to be passing through ports come fall, as consumers continue to pull back amid higher prices and concerns about the economy.

Container volume exploded in 2021, with the nine largest U.S. ports handling 50.5 million containers compared to 43.4 million in 2020 and 43.7 in 2019. That increase of 16.3% created enough congestion at ports that port officials took action to mitigate the crowding, such as increasing operating hours at the ports or proposing fees for containers left at ports for extended time periods.

The high volume at the ports is the result of a change in shopping behavior during early days of the pandemic. Americans used extra cash from coronavirus relief to buy more goods. The sudden increase in demand exposed the precarity of the supply chain and how changes in one area could ripple across the rest of the system, said Brandon Roberts, head of carriers at Dray Alliance, which facilitates the movement of containers from ports via drayage.

This delicate balance is likely soon to be upset once again as consumers continue to pull back from their early pandemic shopping habits. The high level of port activity reported in the most recent data is a result of retailers placing their purchase orders based on last year’s metrics, which reflected the increased demand for goods fueled by government relief and stay at home orders, said Will Boettcher, director of multimodal sales at Loadsmart.

As port activity catches up with consumers’ changing behavior, he expects it will slow down, likely as soon as the fall. Recently, Boettcher said he’s seen retailers “drastically reduce” their purchase orders. 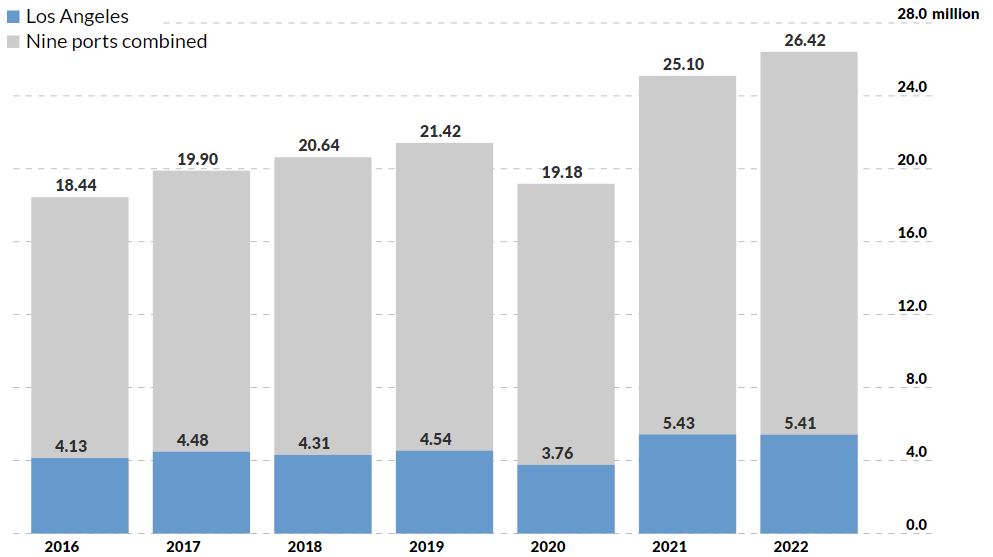 Retailers are placing fewer orders with factories in part because they’re holding excess inventory they incorrectly anticipated consumers would want, he said. Concern about the economy is also pushing companies to slow down their orders.

East Coast ports increasingly shouldering the load
Based on year-to-date figures, loaded imports, a sign of retailers’ expectations of consumer demand, were up 5.8% from 2021. However, the data show a shift in where these imports are concentrated.
Though overall the West Coast accounts for the largest share of port activity in MarketWatch’s data, other ports are mostly responsible for the increase in port activity in 2022. The Ports of Charleston, New York/New Jersey, Virginia and Houston saw a double-digit percentage increase in the amount of goods sitting in containers compared to 2021.

Loaded imports to the East Coast surged with imports up 12%, according to MarketWatch’s survey, while activity in West Coast ports has remained steady with an increase of just 0.2%

Companies shifted the ports they’re using to ship their goods for a number of reasons, according to Paul Brashier, vice president of drayage and intermodal at logistics company ITS. Those include concern over labor shortages and the threat of strikes from the International Longshoreman Workers Union (ILWU). Long dwell times at major West Coast ports have also made East Coast ports more attractive.

Because of this shift Los Angeles and Long Beach are in a good position to accept more containers as back-to-school season and Black Friday approach, Brashier said. However, that means East Coast ports are now working with more container ships docking there than anticipated and will therefore be challenged until Lunar New Year of next year, when Chinese factories close down.

The largest East Coast port by volume, the Port Authority of New York & New Jersey, announced on Tuesday that it would implement a “quarterly container imbalance fee for ocean carriers” to try and clamp down on congestion at the ports.

A similar measure was announced for the Ports of LA and Long Beach last October, but officials keep delaying the implementation. Under the policy, port officials would charge a “Container Dwell Fee” to ocean carriers for each container that sits at the port for more than nine days, starting at $100 per container per day and increasing by $100 each additional day.
Source: MarketWatch