This R&D is part of the Green Innovation Fund project within Japan’s New Energy and Industrial Technology Development Organization (NEDO) for the development of vessels equipped with a domestically produced ammonia-fueled engine, adopted in October 2021 for NYK Line and IPS.*

Since carbon dioxide (CO2) is not emitted when ammonia is combusted, ammonia is viewed to have promise as a next-generation fuel that could mitigate shipping’s impact on global warming. In addition, it is said that zero emissions can be realized considering even the fuel life cycle by utilizing CO2-free hydrogen** as a raw material for ammonia.

By using ammonia as a fuel for ships, it will be possible to significantly reduce greenhouse gas (GHG) emissions during voyages. Therefore, the companies are proceeding with research and development aiming for early social implementation. 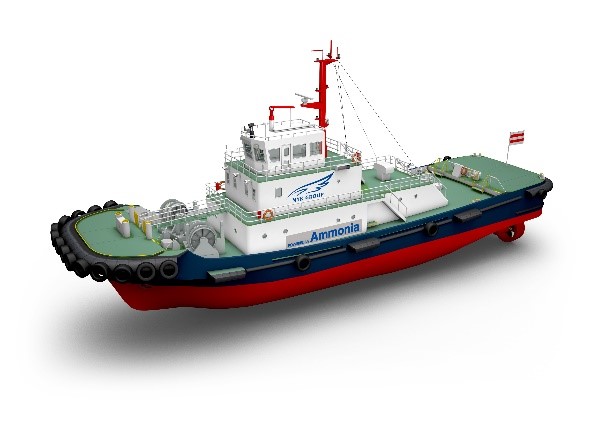 The main design issues when using ammonia as a fuel during development are as follows.
1.It is necessary to combust ammonia stably and operate the engine while increasing the usage ratio of ammonia, which is flame-retardant and has low energy density.
2.Since the combustion of ammonia generates nitrous oxide (N2O: about 300 times the warming potential of CO2) instead of CO2, it is necessary to control the combustion to prevent the generation of nitrous oxide and not to discharge it overboard.
3.A design to prevent leakage of toxic ammonia and adequate safety measures in the event of leakage. Safety measures based on risk assessment are necessary to ensure the same level of safety as conventional vessels.
For this AiP, NYK Line and IPS attempted a design to safely and practically install ammonia fuel-related equipment in a limited space on board by developing an ammonia fuel engine, selecting equipment, and devising the equipment layout in the design. As a result, the companies have achieved the design of A-Tug, which overcomes the above challenges without changing the size of a conventional tugboat.
The parties obtained the AiP after a prescribed examination by ClassNK. In the future, the companies will work toward the realization of a demonstration operation at the port of Yokohama in fiscal 2024 through further studies for construction.
Source: NYK