“Two and a half years after the first meeting of the Boarding Committee, I am pleased to inform you that it is fulfilling its objective of facilitating the placement of seafarers in a transparent manner, focused on skills and according to the needs of the maritime sector, in compliance with current national and international legislation, optimizing the search for personnel and providing the best job opportunities for Panamanian seafarers, since it has contributed to date, in the signing of employment contracts for Panamanian seafarers to work on board various types of ships”, said the Administrator of the Panama Maritime Authority (AMP), Noriel Arauz in the Auditorium of the International Maritime University of Panama (UMIP) as a preamble to the ninth Meeting of the Committee.

The Boarding Committee was created by Resolution of J.D. No. 032-2019 (of Thursday, December 26, 2019), published in the Official Gazette No. 28934 (of Monday, January 06, 2020), as an entity attached to the General Directorate of Seafarers (DGGM), it has its Boarding Committee Regulations, according to Administrative Resolution No. 107-2021 of June 11, 2021, and arises as a response to the need to have and execute national policies to promote employment in the maritime sector, encourage progression and development skills and increase employment opportunities for Panamanian seafarers in the national and international maritime market.

The sectors that represent the Government, the shipowners and seafarers unions, including representatives of educational centers, maintain an active participation, contributing ideas and executing projects to achieve the objectives set,
● Government Sector, represented by the AMP, the Ministry of Labor and Work Development (MITRADEL), the Ministry of Education (MEDUCA), the National Institute of Vocational Training and Education for Human Development (INADEH) and the Panama Canal Authority (ACP).
● Employer sector, represented by the Chamber of Shipping of Panama (CMP).
● By the Universities; the Council of Rectors, the UMIP, Columbus University.
● On behalf seafarers; the Panamanian Association of Naval Officers (APOM).

As a mechanism to achieve the objectives of this Committee, the Panama Maritime Authority developed and implemented the project called Data Base for the Placement of Seafarers, Officers and Cadets, which is managed by the Department of Maritime Labor Affairs of the DGGM, receiving all the documentation of the applicant or seafarer who requests boarding through the email address [email protected], acting as an instrument that facilitates the hiring of personnel. 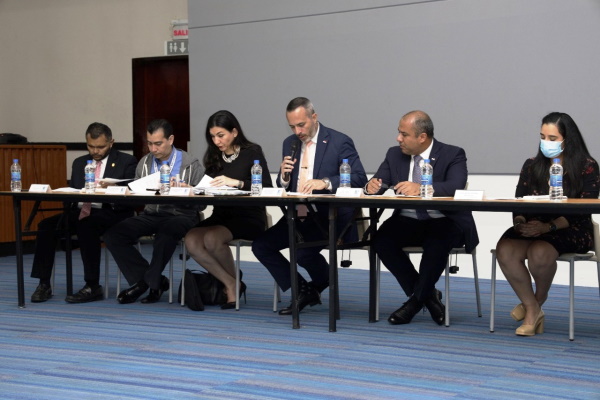 This database is fed by information sent by seafarers who come to the AMP, cadets from the International Maritime University of Panama (UMIP) and Columbus University, as well as by officers from the Panamanian Association of Naval Officers ( APOM); it is updated 3 times a year, available free of charge and online on the AMP website, providing companies with personnel ready to be embarked and provide service on board ships. Any person with an active and competent license can be part of the database.

The AMP is constantly searching for effective ways to strengthen communication with various institutions, organizations and companies, both national and international, to promote employment opportunities and sign agreements to hire Panamanian seafarers, among which the following stand out:

Currently, the market for hiring seafarers in the Republic of Panama shows an encouraging development and behavior. From 2020 to date, 841 employment contracts have been signed, which have been registered with the Panama Maritime Authority, of which 406 correspond to 2022, 263 to 2021 and 172 to 2020. Advances for future agreements in favor of Seafarers.

During the thirty-second meeting of the IMO, in the month of December 2021, the first advances were made for future agreements for the benefit of seafarers, in which more than 15 bilateral meetings were held with maritime countries of interest to the Republic of Panama, as well as with important shipping companies of international prestige, all for the benefit of Panamanian seafarers.

At the end of August 2022, the understanding agreement between the Panama Maritime Authority and the shipping company Mediterranean Shipping Company S.A. (MSC) will be signed in Cyprus. The signing of this agreement has as its main objective to promote the mechanisms that facilitate the promotion of job opportunities for Panamanian officers, cadets and subordinate personnel as well as the establishment of specialized training programs for Panamanian seafarers who need to work on board of the various segments of vessels, whether operated, owned or for which the MSC company provides the crew management service, including the recruitment and placement of officers, junior staff and cadets.

Mediterranean Shipping Company S.A. (MSC) is one of the largest shipping companies in the world in terms of container ships and for our ship registry it is one of the most important.
Source: Panama Maritime Authority