One of the most unusual projects that marine consulting and safety specialists AMS Global Group has tackled, has taken to the water again, 33 years after it was first created.

The Floating Head, a sculpture created by artist Richard Groom, as the centrepiece for Glasgow’s 1988 Garden Festival, has been lovingly restored over the past six months, and is now on public display at Canting Basin at Govan Docks, adjacent to Glasgow Science Centre, for the next four weeks.

Inspired by the carvings on Easter Island, the sculpture was built with support from Govan Shipbuilder Ltd, using the same method used to construct the Mulberry harbours during WWII. At the end of festival, it was scheduled for demolition before being rescued by the owner of a boatyard.

For more than 30 years it lay lost and abandoned in the boatyard, until the family of the late artist managed to track it down and decided they wanted to restore and refloat it. The 30ft head, which was designed and built on a steel mesh frame covered with a cement render, based on a standard ferro-concrete yacht hull design, had deteriorated over the years and had to be assessed for damage.

Andy Groom, brother of the late artist, approached Neil Carr, Director at AMS to see if they could help. AMS donated the services of Associate Surveyor, Captain Bob Sinclair, to survey the sculpture to determine its condition and whether it was repairable.

He carried out an extensive survey of the 27-tonne head producing a full report of its condition and details of the remedial work that would have to be carried out to make the vessel seaworthy again. He also liaised with insurance brokers on the validity or the project. 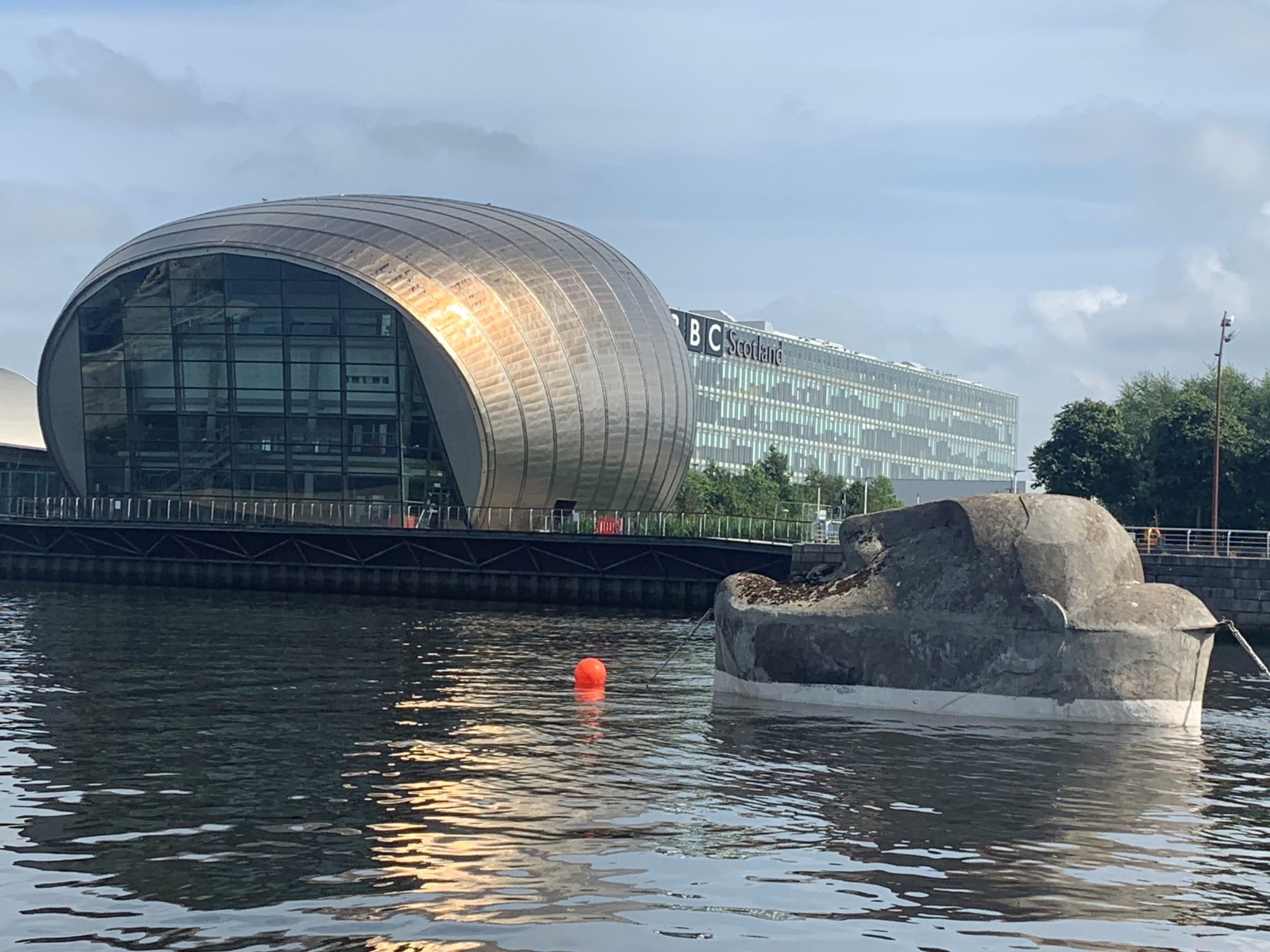 “We were delighted to help with this fantastic project,” said Neil. “Although the vessel itself is different to what we usually work with, the principles involved in carrying out a survey like this are similar. Floating concrete is not easy and surveying such a vessel needs a specialist of Bob’s experience.”

The restoration project was carried out with support from the Sculpture Placement Group (SPG), an organisation funded by Creative Scotland which helps bring sculpture to different audiences. The SPG was instrumental in raising awareness of the project and setting up a crowd fundraiser to pay for repairs. Support also came from Glasgow Science Centre and other partners.

“We could not have done this without the support we got from AMS and from the SPG and all the other supporters who came forward to help,” said Andy. “Our family was touched at Richard’s funeral in 2019 by the number of friends and colleagues who spoke about his work, particularly the floating head. That made us determined to find it and fix it.”

“The support we got after that just grew and grew and that gave us the encouragement to keep going and the means to make it happen.”

Launched to coincide with Glasgow’s Doors Open Day, after the artist’s mum Audrey cut the ribbon, the final fate of the floating head has still to be decided. The cost of ongoing repairs and maintenance means that a land-based location would be the best option.

“We’re open to all options but anywhere in the public domain or on Clydeside would be preferred,” said Andy. “It’s the easier option, but it’s not its rightful home of course, it would be good to see it with water around it.”
Source: AMS Global Group