The sharp spike in VLCC freight rates following the US imposing sanctions on China’s COSCO Dalian Tanker Shipping on September 25 raised alarm bells among various Asian crude importers as the cost of shipping crude oil from the Middle East, as well as regular long distance supply sources in Africa and the Americas, rose sharply.

Far East Russian export crudes including Sokol, ESPO Blend and Sakhalin Blend should appeal to many Asian refiners due to the grades’ cheaper logistics costs.

Industry sources noted that the voyage time from Far East Russian ports including Kozmino and De-Kastri Terminal to North Asia was less than a week, which compares with 10-15 days from Southeast Asia and Oceania, up to 30 days from Persian Gulf ports and more than 45 days from the US Gulf Coast.

The short voyage makes it economically viable to import smaller Aframax cargoes of about 700,000 barrels of crude, rather than the regular Suezmax and VLCC cargoes that typically are more than 1 million barrels.

South Korea, for one, paid an average of $63.59/b for Russian crude imported in August, lower than the $65.22/b it paid for crude from Saudi Arabia, $67.23/b from Abu Dhabi and $65.54/b from the US in the month, latest data from state-run Korea National Oil Corp. showed. KNOC’s import cost figures include freight, insurance, tax and other administrative and port charges.

Asia’s fourth-biggest oil consumer imported close to 22 million barrels of crude from Russia over January-August, with ESPO Blend, Sokol and Sakhalin Blend comprising the bulk of the shipments and Urals Blend around 13% of the total, industry and refinery sources with knowledge of the matter said. 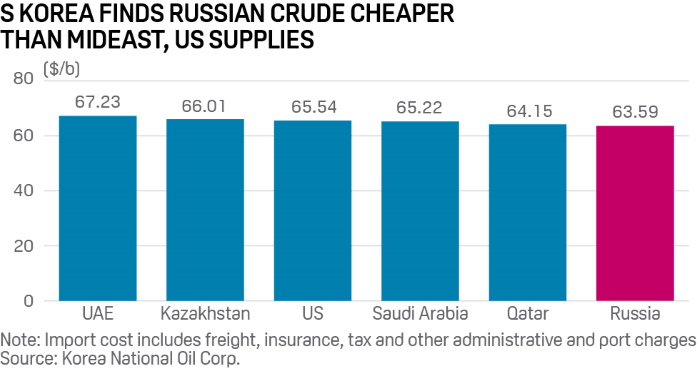 “With logistics costs mounting for Asian refiners, short-haul supplies like [Far East] Russian, Malaysian and Indonesian crudes are gaining all the spot market buyers’ attention,” said a crude and condensate marketing source at a Japanese integrated trading firm. “It’s much cheaper to bring in light crude from Malaysia or Australia than the UAE for example … the further the distance, the much more expensive it gets,” the source added.

Several sources said Chinese refiners had also started to look for more cargoes from nearby Russia due to the recent surge in freight rates.

“China has been and will favor Russian crude for one very obvious reason; close proximity,” said a sweet crude trading manager at state-run Chinaoil based in Beijing.

“There is not much choice now as the popular grades like [Brazilian] Lula become very expensive [to deliver to China] now,” said a source at a Shandong-based independent refinery.

Reflecting Asia’s growing preference for short-haul regional crude supplies, light sweet Sokol was assessed at a premium of $8.05/b to Platts first-line Dubai assessments on a CFR North Asia basis Wednesday, the highest since hitting $8.10/b on February 21, 2014.

According to shipping industry projections, the sanctions on COSCO Dalian ships are equivalent to the removal of 5% of the global tanker fleet. The group controls more than 40 VLCCs, 13 Long Range I and four Long Range II tankers.

“We are not living in a supply and demand market; outside factors are affecting the market,” said a second shipbroker, adding that there was still a lot of tonnage in the Persian Gulf market.

In the immediate aftermath of the sanctions, market sources told Platts on September 26 that at least four VLCCs had been chartered by a Chinese oil company to replace COSCO Dalian tonnage.

“The market hinges on how long COSCO ships are out of play,” a shipbroker said at the time, adding that the removal of COSCO Dalian ships from the global fleet could see the Persian Gulf-North Asia VLCC freight rate surge 40 Worldscale points.

The surge has since outstripped market expectations, with the Persian Gulf-Far East VLCC rate jumping more than w75 to w145 Wednesday from the September 26 assessment at w69.5. 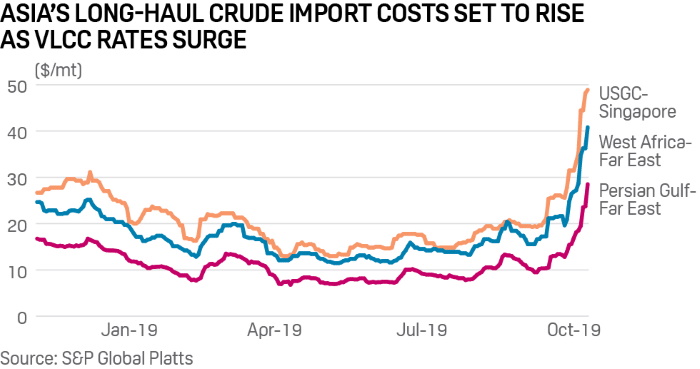