China’s intervention in commodity markets, especially its release of strategic stocks — in the case of some commodities for the first time ever — has had a limited impact on prices to so far, but sends a clear signal that Beijing will do what it can to control inflationary pressures building in the economy.

In August, China’s Producer Price Index for manufactured goods rose 9.5% year on year, while its Consumer Price Index was up 0.8% year on year, according to the National Bureau of Statistics.
The price of production materials rose 12.7% year on year in the month, driven mainly by coal, the chemical industry, and steel. Concerns are brewing that it is only a matter of time before the rising PPI filters through to the CPI, with the current power crisis aggravating the situation further.

China has the infrastructure in place to store commodities in large volumes and the country’s recent actions have shown its willingness to use them when it deems necessary, especially in the domain of food and energy security.

With metals prices remaining high, China has once again announced that it will release 70,000 mt of aluminum, 30,000 mt of copper and 50,000 mt of zinc reserves through an open bidding process on Oct. 9, the fourth batch in a series that started in July.

Meanwhile, China’s National Development and Reform Commission on Sept. 29 said that coal supply will be guaranteed by further increasing production, imports and using reserve stocks, with consumption expected to grow during the heating season this winter and next spring.

Not just stock releases
China’s actions in commodities markets have not been limited to stock releases. In August, the NDRC agreed to let 15 coal mines in Inner Mongolia, Shanxi, Shaanxi, Ningxia and Xinjiang areas extend joint trial production for one more year, enabling them to supply 150,000 mt/day of coal for another year without any disruptions. Coal mine projects in China need to undergo trial operations for up to 12 months before they are allowed to officially commence production, but start-ups can get postponed due to delays in the final approval process.

Meanwhile, in order to control corn prices, the country for the first time allowed corn imports to surpass the annual tariff quota of 7.2 million mt in 2020 and it is expected to stay above that level in 2021 and 2022.

Impact
As corn prices soared due to a deficit in the local market early this year, China started offering large quantities of wheat, which can be used as an alternative for corn as a feed grain. The decision to supply wheat to limit corn prices has been very effective, said Peter Meyer, Head of Grain and Oilseed at Platts Analytics.

“It is something they have been preparing for a long time and now they are really banking on it,” Meyer said.

Corn prices in China have since eased from the high levels in March.

For non-ferrous metals, prices continue to remain high as supply deficits cannot be met by a small fraction of increase in supply.

“The first release of aluminum initially helped ease supply concerns, but this was offset by aluminum production cuts due to power supply shortages, which took domestic prices to a 15-year high,” said Paul Bartholomew, Lead Analyst for Metals at Platts Analytics.

For crude oil, the release of stocks from reserves is likely to reduce crude imports by at least 2% year on year in 2021, the first reduction since 2001, according to Platts Analytics.

China announced Sept. 9 that it will release crude oil from state reserves via auctions and held its first auction Sept. 24, in which it offered 7.38 million barrels. The government is expected to offer more barrels in future auctions.

“It is time for China to openly influence the market as the world’s top crude importer with the biggest crude inventory, so the public auction is a right step,” a Beijing-based analyst told S&P Global Platts earlier.

“We expect the volume [to] not be low, as the announcement has shown Beijing’s intent to influence the market,” the analyst added. 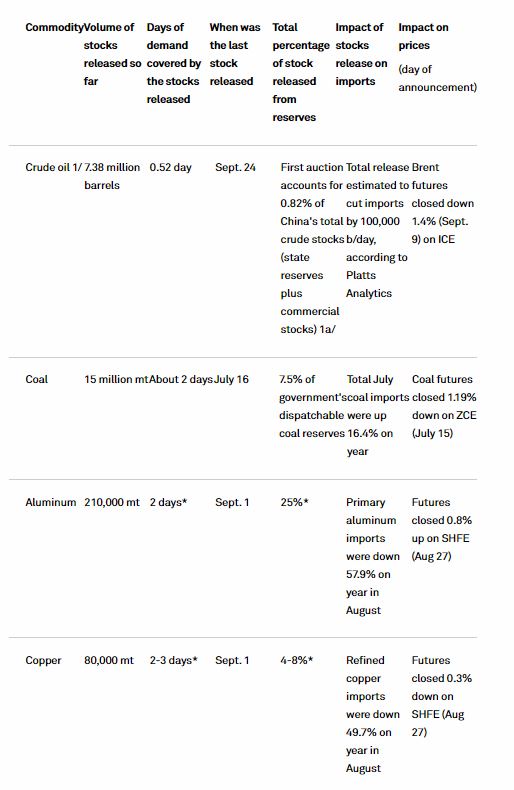 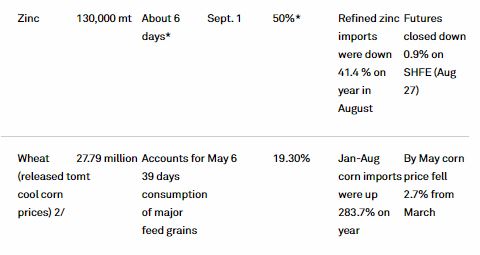