Highlights
-India targets raising share of gas in energy mix from 6% to 15% by 2030
-Infrastructure hurdles, price disadvantage stand in the way: Platts Analytics
-Consumption of renewables may grow at faster pace than for gas

India is stepping up efforts to raise the share of gas in its energy basket, but consumption is unlikely to move ahead at a pace the government is aiming for as infrastructural and pricing hurdles erode its competitiveness with relatively cheaper fuels such as coal.

Analysts told S&P Global Platts that the campaign to boost the share of gas in the energy mix from nearly 6% currently to 15% by 2030 is an ambitious target as domestic production constraints would keep the country dependent on imported gas in the near to medium term.

“Infrastructure hurdles and price sensitivity will keep the rate of gas consumption growth slower than what the government is expecting,” said Chinmayee Atre, LNG analyst at S&P Global Platts Analytics.

India’s share of gas in its overall energy mix is much lower than the global average of more than 20%. 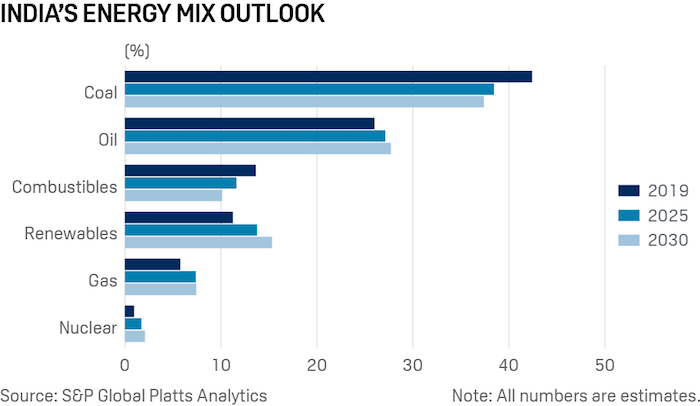 “We have seen significant changes in the upstream policy to boost domestic gas output. But that said, coal remains an abundant and inexpensive fuel. As a result, both power and industrial sectors are heavily reliant on coal,” said Poorna Rajendran, consultant at Facts Global Energy.

To alleviate environmental concerns and boost the use of gas, the Bharatiya Janata Party-led National Democratic Alliance government launched the ‘Gas4India’ campaign in 2016.

India relies on both domestic gas production and the more expensive LNG imports to meet its gas demand.
PRICE DISADVANTAGE

New Delhi is speeding up plans to build pipelines and expand the distribution network. But analysts said the economic unviability of gas compared with coal as an alternative fuel is one of the main factors that would impede the growth in gas consumption.

With an estimated 30% of LNG imports procured on a spot or short-term basis and the remaining from oil-linked contracts, the average price of LNG imports this year has been around $7.77/MMbtu.

This compares with an average coal price of $2.75/MMbtu for Platts CFR West India 4200 GAR on a Panamax shipment basis for January-July and domestic gas prices of $3.69/MMbtu from April.

Therefore, coal-to-gas switching in India needs to be spurred by governmental policies, since gas would be unable to displace coal on an outright economic basis, analysts said.

In addition to the price disadvantage for gas, domestic production constraints pose another big hurdle for India.
India is speeding up oil and gas search and has recently offered 32 blocks under its first licensing auction during the government’s second term in office.

The auctions are part of an overhauled exploration licensing policy that allows pricing and marketing freedom for operators and is a move to a revenue-sharing model, under which the government gets a share of the revenue from the moment production begins.

THE RENEWABLES FACTOR
India is also aggressively pushing for renewables energy, but the South Asian giant’s energy structure is unlikely to see a major shift just yet.

Last July, the Indian government set a target of installing 175 GW of renewable energy capacity by 2022, but some observers have expressed doubt over whether this target would be achievable due to technical constraints, including the lack of battery storage infrastructure.

However, some analysts noted the growth in renewables energy use would be faster than that for gas in the coming years.
“They don’t want to rely on commodities which they need to import,” said Pralabh Bhargava, principal analyst at Wood Mackenzie. “So that’s where renewables are playing a much important role, because India doesn’t have gas.”

According to data from the Central Electricity Authority, thermal coal accounts for about 56% of the share in power generation, while gas and oil account for 7% and 0.2%, respectively. Renewables, including hydro and other sources, account for 34.7%, and nuclear the remaining 1.9%.

A recent report by Wood Mackenzie noted that India had emerged as the market leader with the lowest renewable energy cost in Asia Pacific, whole Credit Suisse noted that despite the renewables push, coal would continue to be the major driver for power generation in India.

“While we forecast accelerating renewable penetration in India due to declining costs in solar and growing attention paid to air quality in urban areas, we do not expect India’s coal demand to peak for many years,” said Matthew Boyle, Platts Analytics lead global analyst for coal.

“India has ambitious goals for electrification, and coal will be the baseload technology required to meet brisk, structural growth in electricity demand,” he added.

India’s coal demand in the fiscal year ended March 31, 2019 was around 991 million mt., according to the coal ministry. India imported 235.24 million mt of coal over the same period, up 13% from the year before.
“Coal consumption will still increase till 2040 because even if the share in energy mix is decreasing, the total coal based generation is increasing,” Bhargava said.
Source: Platts