Analysis: Saudi Arabia’s untested claims of spare capacity may be put to the test

Saudi Arabia has tried to dispel any fears of a coming supply squeeze by touting its spare production capacity.

The kingdom says it holds the ability to pump 1.5 million b/d above its current output of some 10.4 million b/d — crude that could be needed with US sanctions set to cripple Iranian supplies starting in November and Venezuela continuing on its economic freefall.
But many market watchers are skeptical that Saudi Arabia has the full amount of its claimed spare capacity actually available, casting doubt on whether OPEC’s largest producer can prevent a price spike from a supply shortage.

The country, OPEC’s largest producer by far, has never produced above 10.7 million b/d and state oil company Aramco has not allowed a full audit of its capabilities to be made public. 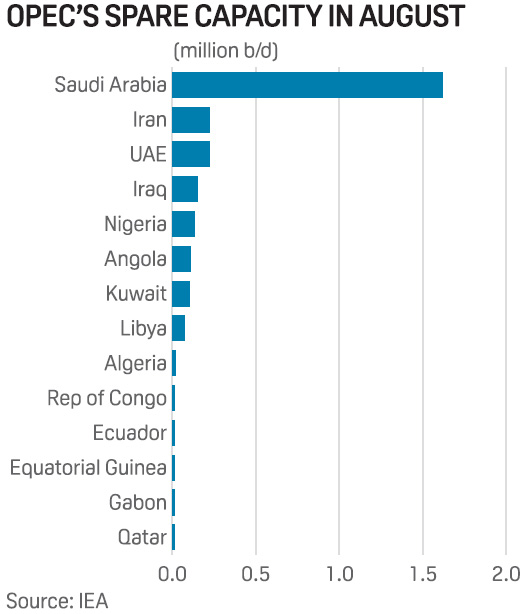 “If we define spare capacity as available in 30 days and sustainable and definitely without reserve damage, which is our definition, then we think there is well below 1.5 million b/d today,” said Bob McNally, president of consultancy Rapidan Energy.

The US Energy information Administration, using the definition described by McNally, estimates that all 15 of OPEC’s members hold a combined spare production capacity of 1.42 million b/d.

The figures are being closely watched, as 1 million b/d or more of Iranian crude could be shut in by US sanctions and Venezuela’s production is expected to decline by some 300,000 b/d by the end of the year, according to some forecasts.

Even if Saudi Arabia and other producers are able to offset those losses, their ability to respond to any other market disruptions would be severely limited.

SHOW ME THE BARRELS
In Algiers on Sunday, where he chaired a meeting of an OPEC/non-OPEC monitoring committee, Saudi energy minister Khalid al-Falih insisted that the kingdom stood ready to meet any customer requests for crude.

Saudi Aramco is able to produce 12 million b/d at will, he said, and once negotiations with Kuwait are complete, fields in the Neutral Zone shared by the two countries could add another 500,000 b/d.

“Show me the customer that needs [oil] and I assure you we will bring the production that is needed,” he said.

Already the kingdom’s output in September will be higher than August’s 10.4 million b/d, he said, and October “will be even higher.”

If Saudi Arabia is unable to pump the volumes needed, it will have to draw barrels from storage. Domestic inventories have been falling sharply in the past year, with Saudi crude stocks in July standing at 229 million barrels, the lowest since October 2009, according to figures the country reported to the Joint Organizations Data Initiative.

But Falih said Saudi Arabia has been building crude inventories in Aramco storage tanks in Japan, Egypt and the Netherlands to better address customer needs, though he did not provide any statistics.

“We have additional 1.5 million b/d spare capacity, [and] we have plenty oil storage, so we’ve got a good cushion to address any shortage,” he said.

Other OPEC members are also expected to chip in. The UAE claims some 500,000 b/d of spare capacity, while Kuwait has about 100,000 b/d, the head of its state oil company said at the S&P Global Platts Asia Pacific Petroleum Conference on Monday.

Rival producers, however, are skeptical, saying the fact that Saudi Arabia and other producers with spare capacity haven’t yet fully tapped their claimed capabilities is evidence that they don’t have much to begin with.

OPEC, Russia and nine other allies agreed in June to raise output by a collective 1 million b/d but revealed at the Algiers meeting that they are still some 500,000 to 600,000 b/d from that target.

“To my mind, it means we have a problem of producing more, all of us,” Omani oil minister Mohammed al-Rumhy said. “We cannot produce more.”

That sits well with Iran, whose officials have warned other OPEC members not to infringe on its sanctions-threatened market share.

“Let’s see if it is possible at all or not,” Iran’s OPEC Governor Hossein Kazempour Ardebili told Platts. “So far it has not been.”
Source: Platts