Another tug for Port Nelson, NZ, as expansion continues

Over the past few years, Damen has been developing a relationship with what may well be its most distant customer from its headquarters in the Netherlands. Located on the other side of the globe on New Zealand’s South Island, Port Nelson is a thriving port in the north of the island that forms a critical part of the infrastructure that serves the regions of Nelson, Tasman and Marlborough.

The regional economy is based on primary production; forestry, fishing, horticulture and viticulture, and to landward the Nelson region is geographically isolated with no rail links. This makes the port the dominant point of entry and exit for goods of all types. Tourism has also prospered in recent years with the dramatic coastline supporting a thriving cruise sector.

Under the joint ownership of the Nelson City Council and Tasman District Council, Port Nelson commenced a major $60 million infrastructure investment programme in 2016. Its aim; to maintain competitiveness for the local exporters by ensuring the continuation of direct international shipping services rather than becoming reliant on coastal feeder providers. To do this required a response to the general increase over recent years in the size of the vessels operating on the long-distance trade routes. With Port Nelson regularly receiving container vessels up to 240 metres in length, it was time to make some changes. 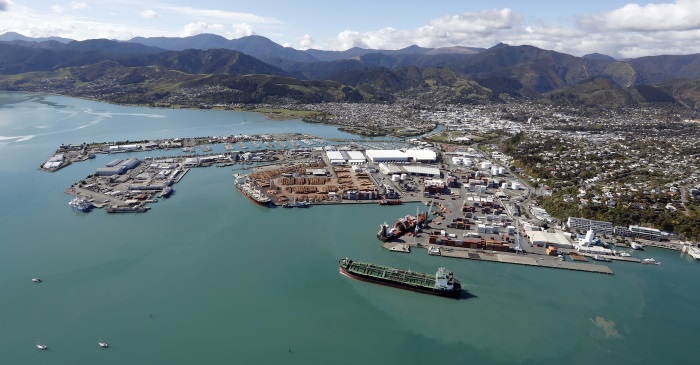 In November 2016 the port took delivery of its first new tug for 32 years. The vessel they selected after reviewing all the available options was a Damen ASD Tug 2310, which was named Tōia; a Maori word meaning ‘to pull ashore’. She was welcomed into the harbour escorted by the existing tug fleet following a 7,280 nautical mile voyage from Damen Shipyards Changde in China. Harbour Master Dave Duncan commented at the time,

“With 50 tonnes of bollard pull the new tug will see our safety margins being much improved on the bigger ships. Now we’ve got the power we need to slow or stop even the larger vessels moving forward, and to pull or push them against strong winds and tides.”

The two legacy tugs, the WH Parr and Huria Matenga, are capable of just 22 tonnes and 32 tonnes of bollard pull respectively.

“Port Nelson is not an easy harbour for ships to leave and enter,” says Matt McDonald, General Manager Operations at Port Nelson. “Not only is the entrance a narrow one that requires a sharp turn, the bay in which it lies has a tidal range of over four metres and so is subject to strong currents. Less predictably, high winds can strike with no warning from either the north or south. Over the past two years the Tōia has proved to be a valuable addition to the port’s tug capability, helping to restore the safety margins for vessel operations which had gradually been eroded over time as the size of vessels calling at the port has increased.”

But the company was only just getting started. By 2018, 3.6 million tonnes including 121,000 TEU containers were passing annually through the port and these volumes combined with increasing cruise ship traffic, resulted in a NZ$30 million upgrade plan being announced. This will focus on completing a rebuild programme that commenced in 1998 with the construction of a 120-metre length of what is now Main Wharf South, to which a further 60 metres was added in 2008. Now a further 100 metres of wharf, the majority of which is almost 100 years old, is being rebuilt to a strength of 100-tonnes axle load which will result in Port Nelson having a full heavy-duty berth of 280 metres in length.

This will not only allow Port Nelson to accommodate larger container and cruise vessels, it will also increase the port’s resilience in the event of a major earthquake, ensuring continuity of shipping and cargo operations. Some minor changes to the entrance channel and navigation aids were also included in the plans.

To support this added capability, on 10th December 2018 Damen sales manager Sjoerd de Bruin signed a contract with Port Nelson CEO Martin Byrne for the delivery of a second Damen Tug. With vessel sizes having continued to increase since the delivery of the Tōia, this time the model selected was the ASD Tug 2411. Port Nelson chairman Phil Lough was quoted as saying,

The expectation is that the new facilities, due for completion in mid-2020, will accept container vessels up to around 270 metres while the increased vessel handling power of a new tug should also assist the port in securing additional visits of larger cruise vessels that previously could not have stopped over in the region.

“The good experience with the ASD Tug 2310 was a major factor in our returning to Damen to discuss our future requirements,” continues Matt McDonald. “We had a great experience with the Tōia purchase. That project was delivered on time and within budget and she has performed really well since then. 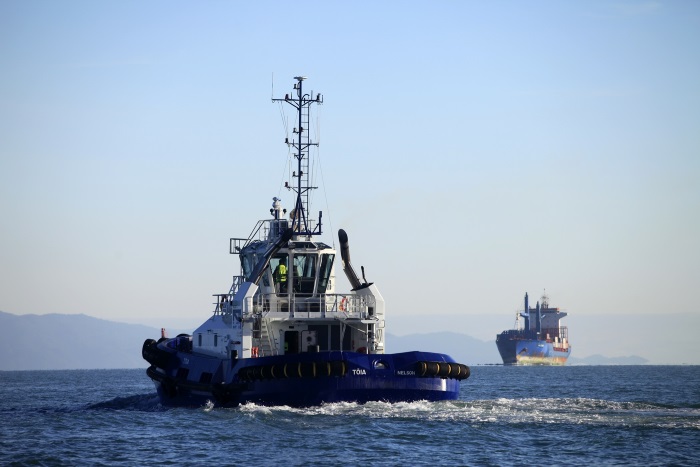 “The process for the ASD Tug 2411 has been different this time as the tug has already been built but the Damen team have been very professional and responsive as was the case for the Tōia. With this new tug we expect safety margins to be further improved. She will also allow us to receive larger vessels, which is what the shipping lines calling at the port have been seeking. And with the ASD Tug 2310 and ASD Tug 2411 sharing many similarities in their design and systems, operating them and training for our tug crews will be simplified.”

This latest round of investment at Port Nelson looks set to boost economic activity and bring in a new era of international connectivity for the region in which it plays such an important role. The Damen tugs that form an integral part of that look set to be busy for many years to come.
Source: Damen