Are economic headwinds blowing in the direction of a global recession? Chief economists answer

Central bankers and policy-makers looking to guard economies against the onslaught of economic headwinds are facing the daunting task of reining in inflation – which could trigger a recession – or introducing more fiscal support to help struggling citizens – which will add to already high levels of public debt.

“When we last gathered for the World Economic Forum’s Chief Economists Outlook in May, we spoke of the perfect storm brewing,” said Saadia Zahidi, Managing Director, World Economic Forum. “Unfortunately, what seemed to be dark clouds overhead back then, is now turning into a full-blown economic storm.”

The discussion saw economists from top global institutions share their perspectives on the risks – and some silver linings – in the world economy.

Saadia Zahidi was joined by Rima Bhatia, Group Economic Adviser at Gulf International Bank of Bahrain, and Guy Miller, Managing Director and Chief Market Strategist at Zurich Insurance of Switzerland. Here are some of the main takeaways.

Recession on the horizon?

With COVID-19 measures easing in many countries in early 2022, the medium-term expectation was for economies to be reinvigorated by rising consumer confidence and a return to normalcy for supply chains. However, Russia’s invasion of Ukraine, China’s zero-COVID policy, the energy and food crises, saw optimism for the global economy dwindle in the latter half of the year. 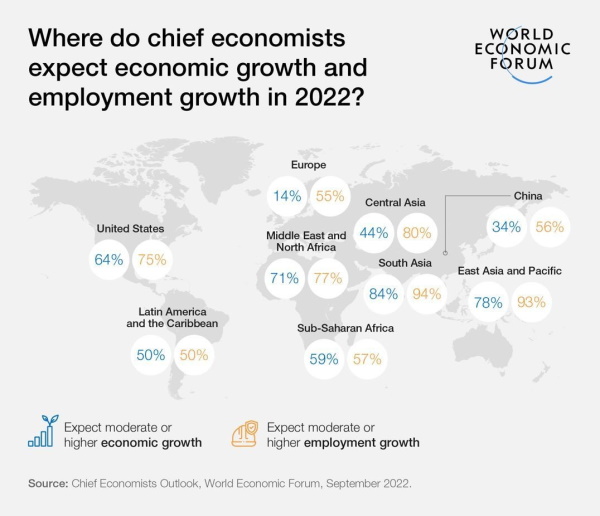 The IMF has lowered its global growth forecast for 2022 and 2023 to 3.2% and 2.9%, respectively, a global recession may be imminent. The World Economic Forum’s Chief Economists Outlook for September 2022 surveyed economic leaders from around the world to collect insights on their reading of the global economic situation. The outlook is grim, with 73% of respondents believing that a global recession is either somewhat likely or extremely likely.

“Are we heading to a recession?” asked Rima Bhatia of Gulf International Bank in the panel discussion. “The probable answer is yes,” she said, adding, however, that “A global economic slowdown is happening, but I would still say that it is avoidable. This is a supply-side issue. If China emerges from its prolonged lockdown and central banks continue to take brave action, inflationary pressures may be alleviated, and the effects of recession may be minimized.”

On the flip side, the US could see moderate growth according to 60% of respondents, while 71% and 77% are optimistic about MENA and South Asia’s growth, respectively.

With the exception of China and MENA, respondents expect elevated rates of inflation across the world for the remainder of 2022. This will have a major impact on the growth outlook, with 93% of respondents in the US and Europe expecting inflation to remain high.

The European Central Bank hiked interest rates by 75 basis points (its largest ever hike), while the US Federal Reserve (Fed) approved a third-straight quarterly hike, also by 75 basis points. The Fed’s benchmark lending rate is now in a 3%-3.25% target range – its highest since the 2008 crisis. Prices in the US and Europe are being pushed up by high levels of aggregate demand, impacting the entire value chain, from energy to raw materials, intermediate goods and labour. Consumers are tightening their belts, with citizens of major economies, including Germany, the UK and the US, seeing their wallets stretched at grocery stores. 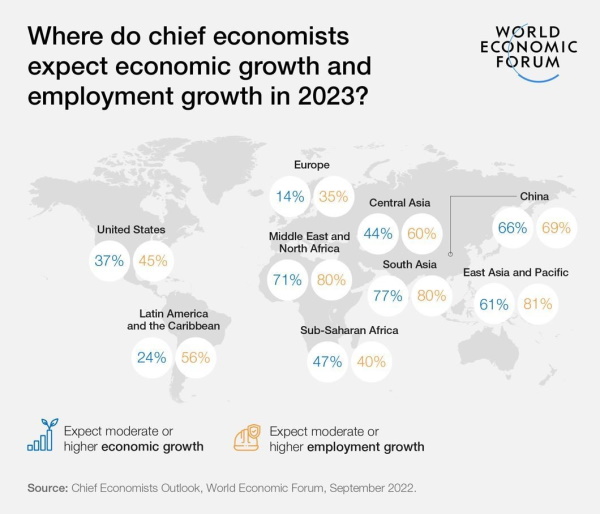 “Inflation is still way above the targets of central banks,” according to Guy Miller of Zurich Insurance. “Central banks can, realistically, only deal with this by trying to reduce demand by increasing interest rates. These record hikes we are seeing will only have an impact on the economy much further down the line. But, we can be optimistic about inflation. These rate hikes will have an impact on inflation – albeit a bit late for those suffering from the cost of living price hikes now.”

Miller also believes that the supply-side issue could be resolved: “A year ago, we were stressed about supplies of microchips, lumber, copper and steel. We saw the supply chain iron out wrinkles in these critical products and commodities. I believe the same could happen with other supply-side issues.”

The human toll, as pinpointed by Zahidi, may be severe: “Real wages are falling and can’t keep pace with surging prices. In low and medium income countries, food and energy security could easily lead to social unrest.” 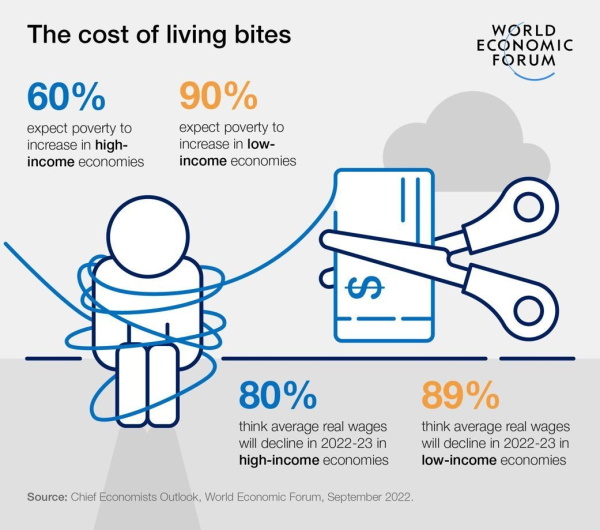 Respondents are unambiguous that geopolitical developments are playing an increasingly important role in shaping the global economy. With the war in Ukraine being a proximate cause of many disruptions, particularly food and energy security, over 85% of respondents see geopolitical risk as having a major impact on global economic activity. Two-thirds of respondents, too, say that supply chains will be reconfigured according to redrawn geopolitical fault lines.

Economists emphasize, though, that not all regions will be affected similarly and that these could cause a redraw of current globalized trade networks.

‘Weaponized interdependence’, where longstanding global economic integration could evolve to create more distinct trade blocks, seems increasingly likely. Europe’s progress in reducing dependence on Russian energy is one such example. Sanctions, too, may lead to countries like Russia solidifying stronger partnerships with partners beyond Europe and the US. Europe, ultimately, may be at risk of stagflation, with inflation remaining high while economic growth and job creation can’t keep up thanks to these external factors.

These shifts, however, aren’t only having negative repercussions for some regions. Some countries may well emerge better off on the medium-term from the current crisis. Economists, for the most part, are optimistic about the outlook for MENA, where countries like Saudi Arabia are growing at 7.5%, and South Asia, where India and Indonesia will both grow at over 5%.

“Perhaps the best way to look at it,” said Bathia, “Is that there are storm clouds hanging over some parts of the world while others are ripe with opportunities. From a global perspective, definitely, things may slow down.”
Respondents in the survey are generally optimistic about Asia and MENA. This may see the balance of economic power continue to shift East, something that predates COVID-19 and the Russian invasion.

Miller concurred with Bhatia, “We see a slow down in the merchandise and goods market, but there could very well be an uptick in services in 2023. If China loosens restrictions and the service economy returns to its full potential, we may see a lot of alleviated pressure on other segments of the economy.”

The experts agree that decisions by leadership will be critical, especially in the face of geopolitical pressures. Fiscal policy will help shield economies against global shocks, but many low-income countries are already low on fiscal ammunition to support struggling consumers. “Countries, though, have no choice but to at least cushion their citizens a bit against these shocks,” said Miller, “The silver lining here is that digital adoption is boosting new segments of the economy and taking pressure off of resources. In South East Asia, we’ve seen e-commerce, digital mobility and digital payments create entirely new markets. This will be crucial in fighting off threats to the traditional markets.”

The mounting geopolitical and economic turmoil will have profound implications on the business world. The survey finds that, while globalization and global economic integration will remain under pressure, some economic segments like finance and services will see higher integration over the next three years. Goods and labour, on the other hand, will become more regionally fragmented.

Multinational companies that have benefited from liberalization and deregulation over the last few decades may have to adopt diversified supply strategies, with respondents indicating that localization and alignment with new geopolitical fault lines will be crucial for these organizations.

“Ultimately,” said Miller, “It is quite clear we’re in a transitionary phase. Technology is creating immense opportunities, as is ESG. Those who navigate this will be the ones who adapt best.”

Taking a ‘wait and see’ approach toward global recession simply won’t do in this fast-moving new economic reality that demands awareness and flexibility. Risk diversification, cost efficiencies, and sustainability will be crucial moving forward.

Bhatia, in conclusion, emphasized that “Integrating ESG principles across the board, whether that’s in supply chains, operations or digital transformation, will be critical to companies going forward. Coupled hereto is a strong focus on being data-driven. Companies who live-and-breath ESG and data-centricity will stay competitive.”

To wrap up the session, Zahidi noted the importance of leadership: “We saw a concerted effort amid the pandemic to push the global economy into the right direction, with a strong focus on the green economy and reskilling for the future. We need multistakeholder cooperation, from both governments and the private sector alike, to steer us through this storm.”
Source: World Economic Forum