Energy markets continue to be volatile and producers continue to hedge. During the first three quarters of 2018, gas prices remained relatively flat while crude prices had a bumpy climb from $60/bbl to nearly $75/bbl. The fourth quarter brought volatility to both gas and crude markets. Cold weather and low storage heading into the winter heating season caused a short-lived spike in gas prices, which then returned to the $3/MMBtu level by the end of the year. Meanwhile, from the beginning of October through the end of 2018, crude saw the largest decline in prices since 2014, falling from $75/bbl down to $45/bbl. This volatility in commodity prices is what drives many companies to implement a hedging program. The following is a survey of 30 of the largest public oil and gas producers and their hedging activities as disclosed in their December 31, 2018 10-K filings. It also includes comparisons to the same survey done in the prior year.

The following survey provides as much information as possible based on what was disclosed in regulatory filings. US GAAP accounting rules form the minimum disclosures companies must provide in their filings to provide users with an understanding of:

While the accounting rules require entities to disclose the level of an entity’s derivative activity, there can be variance in practice as to how much information a company discloses about the instrument types, volume of production hedged and the average hedge price.

Why Hedge?
Upstream companies have relatively straightforward objectives, which are to search for, develop and extract hydrocarbons. These activities are very capital intensive and require large amounts of cash. Companies need enough cash flow, not only to support a level of capital expenditures and exploration activity to ensure that oil and gas continues to flow, but also to make debt payments, comply with debt covenants and support the general and administrative costs. Hedging programs at upstream companies are developed with the primary purpose of providing a level of cash flow to increase the likelihood of meeting those needs.

Without the protection of an effective hedging program, an upstream company’s cash flows are subject to the volatility of the market. An upstream company without hedges will benefit from higher market prices, but they have a very short amount of time to react when market prices decline. This is a predicament many upstream companies experienced during the 2014 price downturn.

The following outlines the percentage of companies in the survey that maintained hedges as of December 31, 2018 for crude, natural gas or natural gas liquids (NGLs). Consistent with prior years, it is clear that the majority of public oil and gas producers maintain hedging programs. 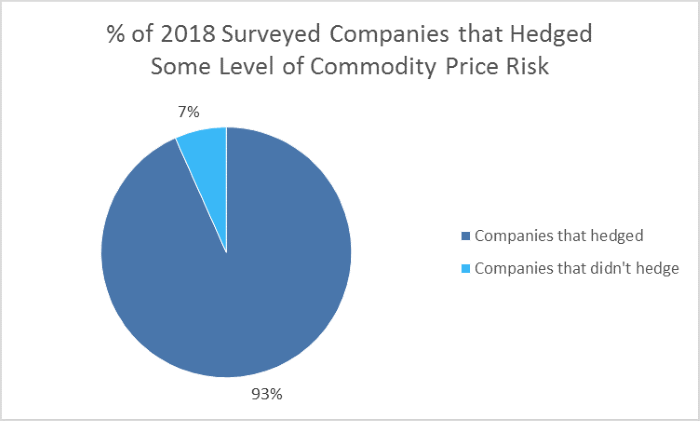 Instrument Types
While some companies will state that they have a hedging program and have executed hedges, investors should carefully consider the types of instruments utilized. The downside protection provided by some instruments may not be that significant. The following notes the number of companies holding various instrument types in their hedging portfolio.

For a producer, swaps provide the highest amount of downside protection. However, swaps limit upside price participation. This leads producers to utilize purchased puts, which can be costly, or costless collars, which allow the producer to participate within a range of price movements. Other instruments noted in the survey were swaptions and three-way options. Swaptions continue to represent a minority of the instrument types utilized by the public companies.

The use of three-way options (purchased put, sold call and sold put) were common in higher price environments when oil prices were over $80/bbl. However, many producers have been hurt by this strategy as it contains what some consider a trap door. For example, a producer with a $40/bbl sold put, $50/bbl purchased put and $60/bbl sold call would participate in price movements between $50/bbl and $60/bbl. However, once the price goes below $40/bbl, the company would have no downside protection as the price falls below $40/bbl. This was particularly painful for many producers in 2014 that had sold puts in the $65-$75/bbl range under the belief that prices could never go below those levels.

Of the public oil and gas companies reviewed, swaps continue to be the preferred instrument for both natural gas and crude. A strategy utilizing both swaps and collars was common for both crude and natural gas. The types of instruments used for gas remained generally consistent with the prior year. However, for crude, the use of swaps decreased while the use of purchased puts increased. The use of crude collars and three-way collars were slightly less popular in 2018 than during 2017. 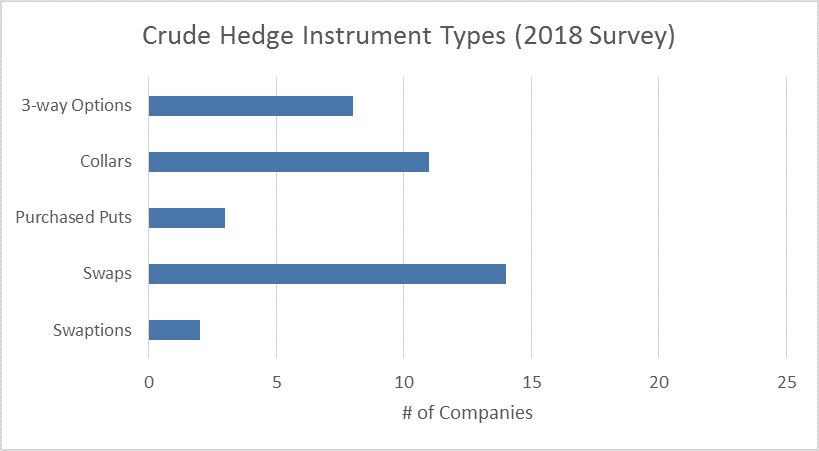 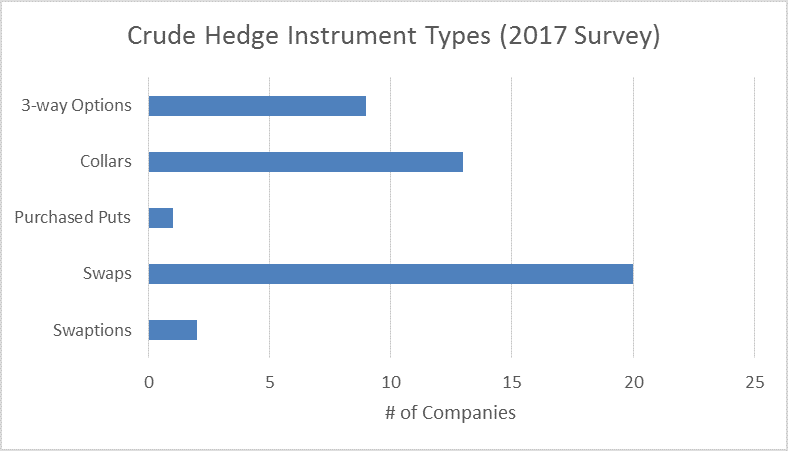 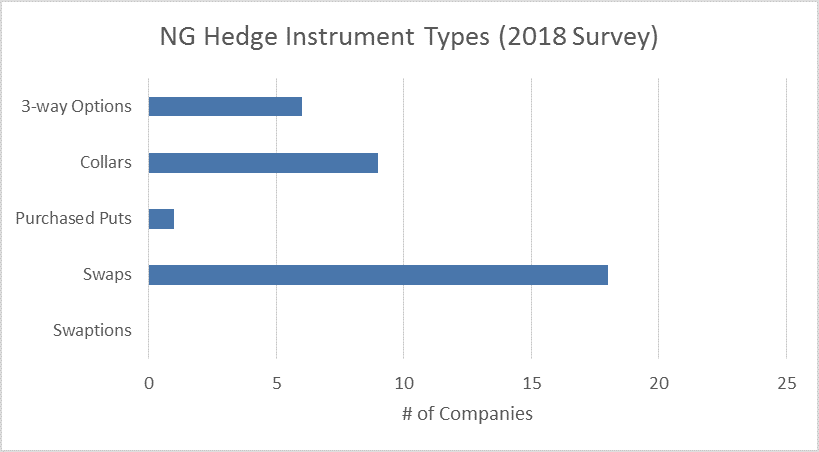 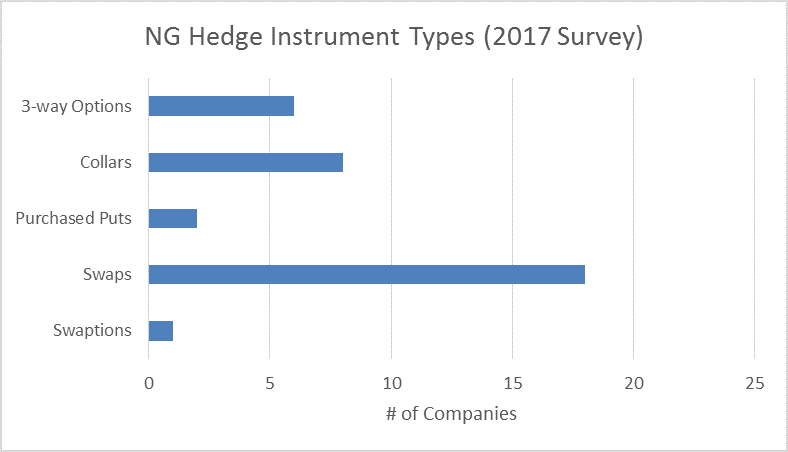 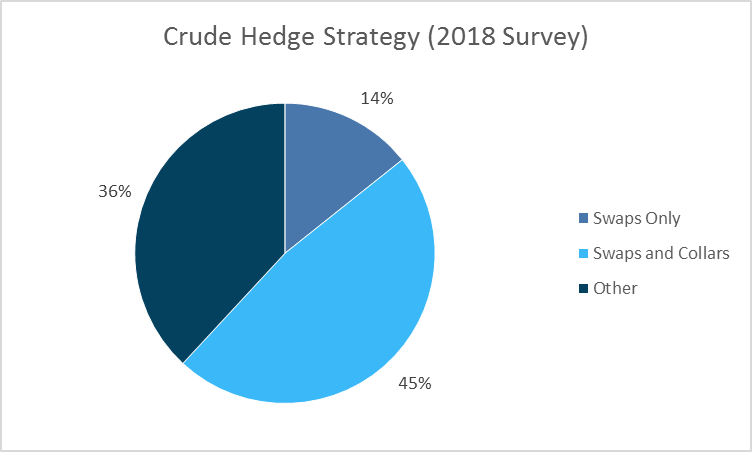 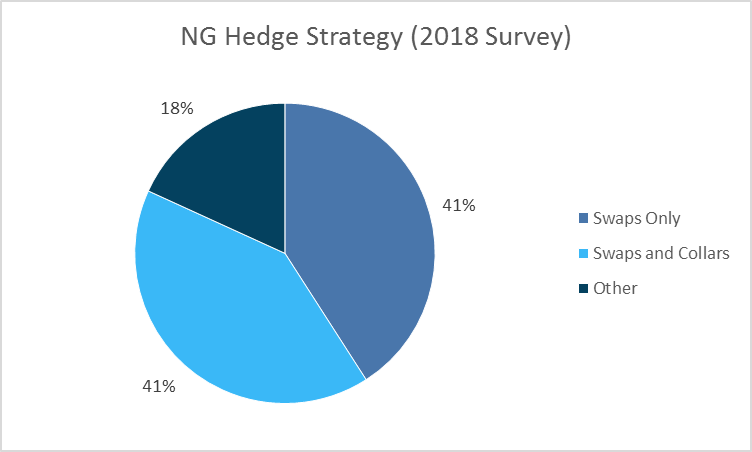 Length of Hedging
When executing a hedging program, many companies are challenged with how far out to hedge their production. If the prices increase over time, they largely give up the upside. However, if the prices drop, it allows the company to weather the storm for a longer period of time. Based on the survey results, it is common for companies to hedge some level of the prompt 12-month period representing 2019. A higher percentage of companies hedged crude than natural gas in 2020. However, it is interesting to note that more companies have hedged natural gas in 2021 to 2023 than crude. 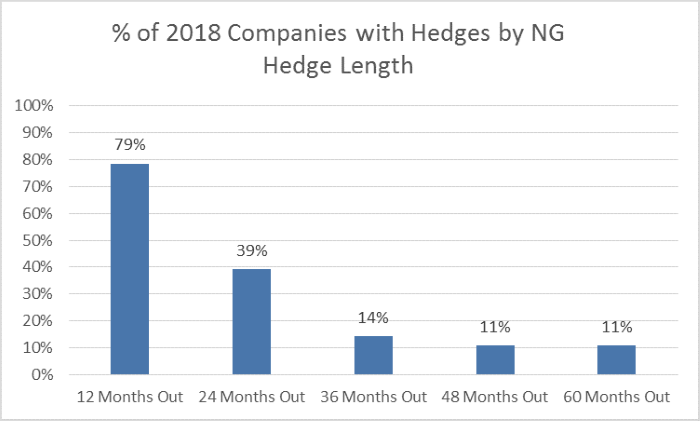 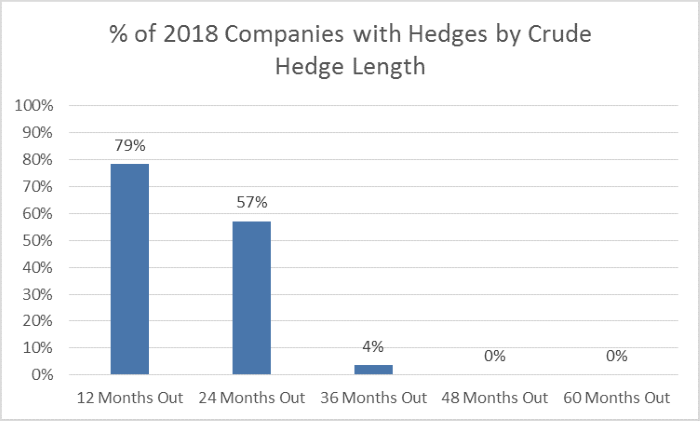 Price Levels
The ability to only hedge at the top of the market is impossible. The decision of when to hedge and at what price level is rooted more in the risk management policy of providing predictable cash flows than in an ability to predict prices. As a hedging program is intended to increase cash flow predictability, the price level at which companies execute hedges is often heavily influenced by operating budgets and debt compliance. 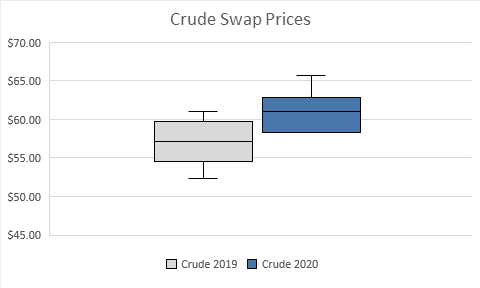 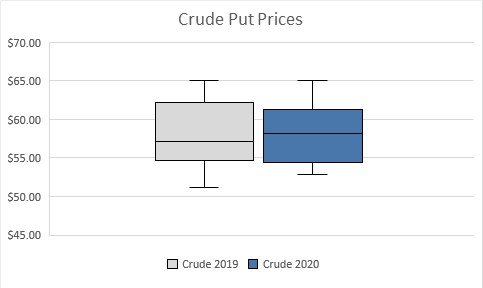 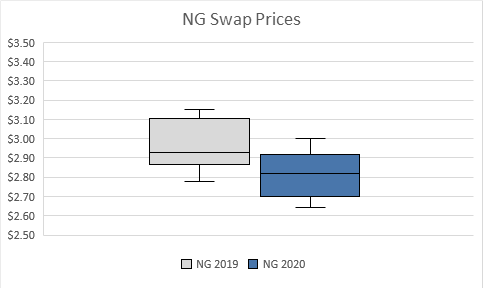 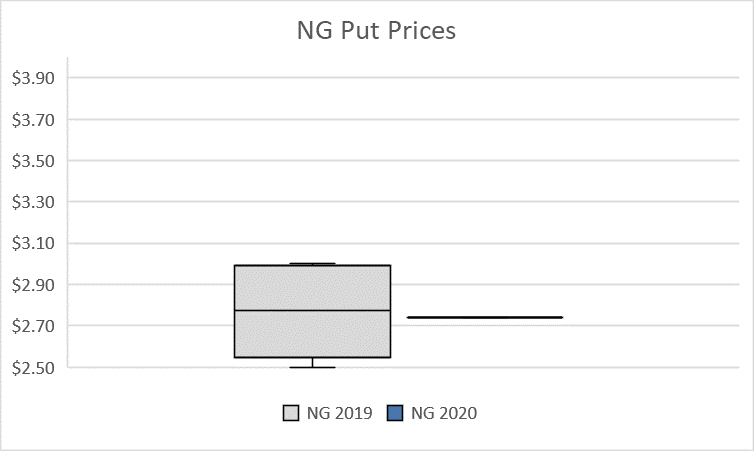 In summary, the implementation of an effective hedging program can be a tool that helps ensure certainty of cash flow and perhaps avoid having to file for bankruptcy. Management teams are encouraged to consider the various alternatives and strategies that a hedging program can provide in meeting their ever-changing business plans.
Source: Opportune LLP