As Coal Use Wanes, U.S. Miners Depend on Foreign Buyers, Steel

It keeps getting harder to sell coal in the U.S.

U.S. miners are forecast to cut production 4.7 percent in 2018 as electricity generators shift increasingly to natural gas and renewable energy, according to the U.S. Energy Information Administration. The expected total of 736.3 million short tons would be the second-lowest since 1978, and just barely more than 2016, a year filled with mine closures, mass firings and bankruptcies.

As demand for coal used to generate electricity continues to dwindle, the key to success for U.S. miners increasingly lies in two things: steel and international markets. Companies that have access to overseas markets and mine metallurgical — or “met” — coal that’s used in steelmaking are performing well. Those who sell exclusively to U.S. power generators aren’t.

“It’s the export story, and it’s the met story,” Mike Dudas, an analyst for Vertical Research Partners LLC, said in an interview.

Burning Out
U.S. coal production is forecast to fall in 2018 as power plants continue to close

The dichotomy has been clear as miners reported fourth-quarter earnings. Companies including Arch Coal Inc. and Peabody Energy Corp. that mine metallurgical coal and have overseas customers beat analysts’ expectations and have seen their shares rise.

Look at Warrior Met Coal Inc., an Alabama-based company that exclusively mines metallurgical coal in southern Appalachia and exports almost every lump. Revenue in the fourth quarter beat the highest estimate and its shares are up more than 65 percent since April. 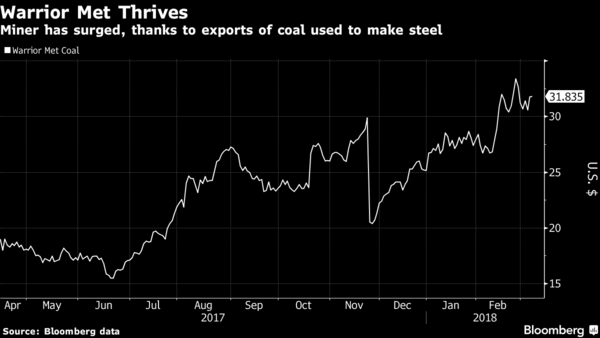 A key reason it’s so valuable is that supply tends to trail demand. When economies heat up and give rise to new bridges and skyscrapers, steel consumption spikes, fueling the market for metallurgical coal. It can take years, however, to open new mines to meet that demand. That drives up prices in the meantime.

“Builders don’t want to wait five years for that additional ton of met coal,” Lucas Pipes, an analyst with B. Riley FBR Inc., said in an interview. “They want that steel right now.”

On the other side of the trend is Cloud Peak Energy Inc., a Wyoming-based company that extracts all its coal from the Powder River Basin and sells exclusively to electricity generators. While the company would be happy to export more, there’s limited capacity at West Coast export ports, and few analysts expect that to change anytime soon. Its shares are down more than 20 percent in the past year. 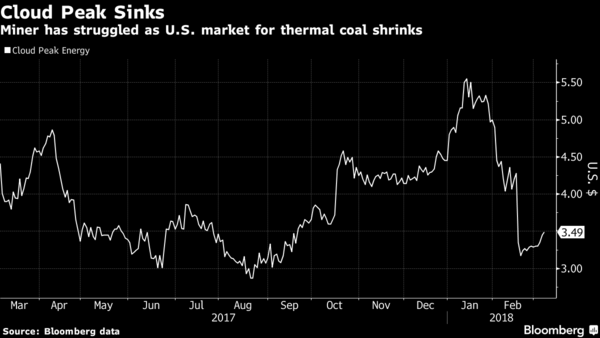 The big problem for Cloud Peak and other miners of thermal coal is there are fewer and fewer U.S. customers. America’s coal-fired power plants lost 15 percent of their generating capacity, or 46 gigawatts, from the start of 2012 through 2017. Another 12 gigawatts are scheduled to close this year, making 2018 potentially the second-biggest year on record for retirements, according to Bloomberg New Energy Finance.

Things don’t look much better for domestic coal demand beyond 2019, according to Andrew Cosgrove, a Bloomberg Intelligence analyst.

“It really comes down to natural gas,” Cosgrove said. “Utilities are making long-term decisions about their portfolios on the back of what seem to be low natural gas prices for the foreseeable future.”
Source: Bloomberg

2018-03-09
hellenicshippingnews.
Previous: Analysis: Asian ferrous scrap market could be hit by any US steel tariffs
Next: COFCO, ADM boost Brazil grain exports, close in on Cargill

The Megaships That Broke Global Trade