Asian buyers of Iranian oil are gaining confidence they will win U.S. consent for some imports to continue even after American sanctions snap back next month.

Major Iranian customers South Korea, India and Japan are in talks with Washington for waivers, highlighting the specific reasons they need to continue purchases, according to people familiar with the discussions. Despite the upbeat tone, the exemptions from the U.S. haven’t been finalized and may not end up being approved, they said, asking not to be identified because the negotiations are confidential.

The U.S. has so far insisted that all purchases from Iran must drop to zero in an effort to put pressure on the Islamic republic to negotiate a new nuclear deal, after President Donald Trump in May walked away from a 2015 pact negotiated by Barack Obama. Even before American sanctions take effect, the oil market has tightened beyond what the White House expected, briefly sending Brent crude to a four-year high over $85 a barrel.

If South Korea, India and Japan obtain waivers, it’s likely to be for lower imports than in the past with a commitment to continue reducing purchases over time.

“We evaluate waivers on a case by case basis,” said U.S. State Department spokeswoman Heather Nauert. But she cautioned that Washington wasn’t planning to provide blanket exemptions to Asian countries. 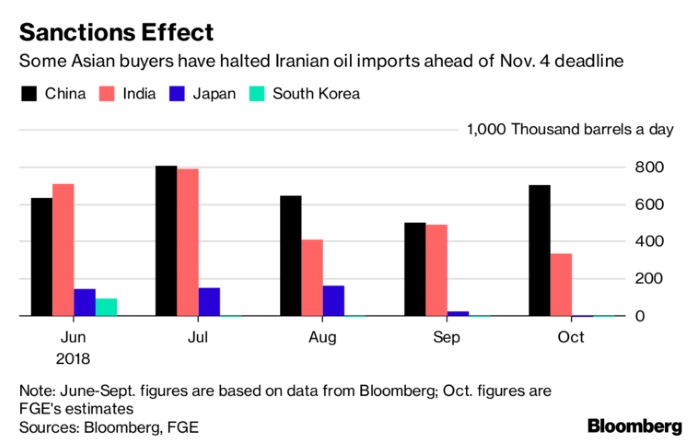 Iranian exports have slumped by 30 percent, or over 800,000 barrels a day, over the past six months as buyers have shunned purchases to avoid the risk of being cut off from the U.S. financial system. Shipments are seen dropping further to less than a million barrels a day as everyone from shipowners to port operators and insurers turn away from the Middle East nation. In a bid to keep customers, it’s offering record discounts on its crude.

Meanwhile, buyers are scrambling to find alternative supply at a time when higher crude prices and a stronger dollar have boosted the import bills for American allies. In India, the local currency is tumbling and public protests are flaring over higher costs before elections next year.

The South Asian country had planned to cut purchases to zero in November, but refiners later decided on limited imports after the government asked them to subsidize retail fuel prices. A spokesman for the oil ministry didn’t respond to calls seeking comment.

Zero Imports
For South Korea, there’s a specific need for an ultra-light form of oil known as condensate from Iran’s South Pars fields. That’s because several of the nation’s plants are geared toward processing the grade. It had stopped buying shipments since July and was the first among major buyers to cut imports to zero. Meanwhile, it’s been forced to turn to alternatives from Norway to Saudi Arabia. An energy ministry spokesperson declined to comment.

Japan has temporarily halted loading Iranian oil ahead of the U.S. sanctions that take effect on Nov. 4. The Asian nation will continue to negotiate “tenaciously” with America to maintain crude imports from the Persian Gulf state, Minister of Economy, Trade and Industry Hiroshige Seko said last month. An official at METI declined to comment on Thursday.

Top Iranian customer China remains a wildcard. Its government has said it opposes unilateral measures by the U.S., with which it’s fighting a trade war. During the previous round of sanctions earlier this decade, it remained the biggest buyer from the Persian Gulf state, although purchases fell as Iranian production was squeezed. Over the past few months, the Islamic republic’s shipments to the Asian nation have declined.
Source: Bloomberg

2018-10-20
hellenicshippingnews..
Previous: Japan firms try out China’s ‘Belt and Road’ cargo transport to Europe
Next: Greek Shipowners Strongly Support The Forthcoming Discussions At The UN IMO For Effective Implementation And Enforcement Of The 2020 0.5% Global Sulphur Cap