Key central bank decisions
Following the slightly lower than expected 2Q22 CPI release recently, the Reserve Bank of Australia (RBA) can probably stick to hiking rates by only 50bp at the 2 August meeting. This will leave it able to respond further in September should the Wage price index data due on 17 August show an alarming increase in wage costs. Policy rates in Australia would still be lower than the 2.5% that RBA Governor Lowe has indicated are the lowest likely level of neutral nominal interest rates. Governor Lowe delivers the RBA statement on Monetary policy on 5 August.

The Reserve Bank of India also meets to decide what to do with policy rates on 5 August. Currently, the repo rate is 4.9%, following a 50bp rate hike in June. Since then, inflation has remained reasonably steady at just over 7%, though this owes in part to cuts in excise duties. A 25bp rate hike in August will close the gap between policy rates and inflation. We think that rates will need to get closer to 6% by the year end to eliminate the gap completely, though this could be helped if inflation also moderates, reflecting lower global agricultural prices.

Manufacturing PMI in Taiwan should settle in the range of 49-50 after demand for semiconductor chips, used in smart devices, slowed due to soft demand from Mainland China and developed economies due to accelerating inflation.

Inflation continues to accelerate in Asia
Several inflation reports are also schedules for release. Philippine July inflation will likely rise to 6.3% from 6.1% in the previous month. On top of pricey energy, food inflation is also on the uptick after firms announced price increases for bread and canned goods. Red hot inflation will likely keep up the pressure on central bank to hike policy rates at the August policy meeting.
A similar theme is playing out in Korea where CPI inflation will likely rise further to 6.3% (6.0% in June) on the back of rising agricultural and utility prices. We expect to see some signs of price stabilization however as the month-on-month growth should slow after gasoline and rental prices declined last month.

Despite enjoying relatively behaved inflation so far this year, Indonesia could see headline inflation run up to 5% and core inflation rise to 3%. The central bank has preached patience on rate hikes so far but did signal adjustments would be tied to the fate of core inflation. We expect Bank Indonesia to prime for a rate hike after core inflation moves past 3% with the first increase possible by August.

Lastly, price pressures are also evident in Taiwan, where headline inflation should edge up slightly between 3.5% YoY to 4% YoY reflecting high energy prices in the hot summer.

Trade reports from Korea and Australia
Rounding out the week, we have trade numbers from Korea and Australia. Korea’s export growth is expected to accelerate to 12.5% YoY (vs 5.4% in June) due to easing lockdowns in China. Imports should stabilize as global commodity prices continue to fall. Overall, the trade balance will likely remain in deficit for a fourth straight month, improving only slightly from June.

Lastly, Australia also releases trade data for June, and after the 9% surge in exports registered in May, we anticipate some pullback in the latest data which could pull the trade surplus down from the record AUD15.97bn figure recorded in May. 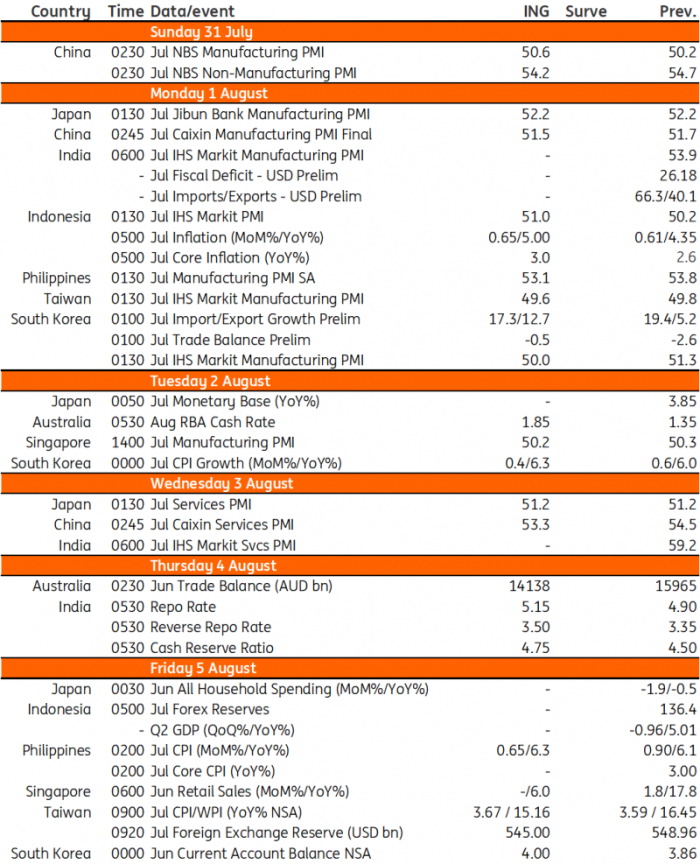