Inflation in Australia in 3Q21 dropped to 3.0%Year-on-Year from 3.8% the previous quarter, and will likely stay close to 3.0%YoY in 4Q21. Although still higher than the Reserve Bank’s (RBA) inflation target, the important fact is that this is a fraction of the inflation rates seen in the US and Europe and is not moving higher but stabilising. Markets are pricing in a similarly aggressive tightening cycle from the RBA as for the Federal Reserve, but these inflation numbers will support the more dovish message being given by the RBA.

December 2021 inflation for Singapore, meanwhile, is expected to remain elevated. Core inflation, the inflation measure monitored by monetary authorities, likely rose to 1.8%, prompting the authorities to implement supply-side measures to mitigate inflationary pressures on food items. Elevated inflation will keep the Monetary Authority of Singapore (MAS) leaning towards a hawkish change ahead of their April meeting.

Taiwan’s December industrial production growth should slow slightly but will probably remain high at 11.6%YoY, down from 12.19% in November. This moderation is due to Covid cases in Taiwan. Unemployment should be quite flat as well since Chinese New Year is coming, which increases demand for temporary jobs in the service sector. GDP will be announced on Thursday, and we expect it to show a marginal slowdown to 3.5%YoY in 4Q21 from 3.7%YoY in 3Q21, mainly a base effect phenomenon. Full-year GDP growth should be 6% in 2021, a jump from 3.0% in 2020. The PMI for January will show that manufacturing activity grew slower – again a Covid phenomenon.

GDP figures out from Korea and the Philippines

Following a 3Q21 GDP growth rate of only 0.3%Quarter-on-Quarter, the prospect of a much stronger fourth quarter figure has been thrown into doubt by the December surge in Covid cases in Korea that likely weighed on service sector activity, along with a flat full quarter for industrial production and likely reversal of the positive swing in net exports in 3Q21. But GDP probably has little bearing on the outlook for the Bank of Korea, which is more focused on financial distortions and the housing market at present.

In the Philippines, 4Q21 GDP is expected to hit 6.7%. Household spending likely delivered much of the boost, with mobility indicators suggesting economic activity picked up with Covid cases slowing ahead of the holiday season. However, damage from a super typhoon in December likely sapped some growth momentum given substantial crop damage on top of destruction to infrastructure and property. This should bring full-year growth to 5.4% for 2021, at the upper end of the government’s full-year target. The recent surge in Covid-19 infections at the end of December could mean that much of the gains made in 4Q21 will be walked back as restrictions were reinstated in January 2022.

The rest of the field

Next week also sees the publication of trade data from the Philippines which will likely figure in the fourth quarter GDP report released on the same day. The calendar also features manufacturing output and unemployment figures from Singapore, as well as trade data from Malaysia. 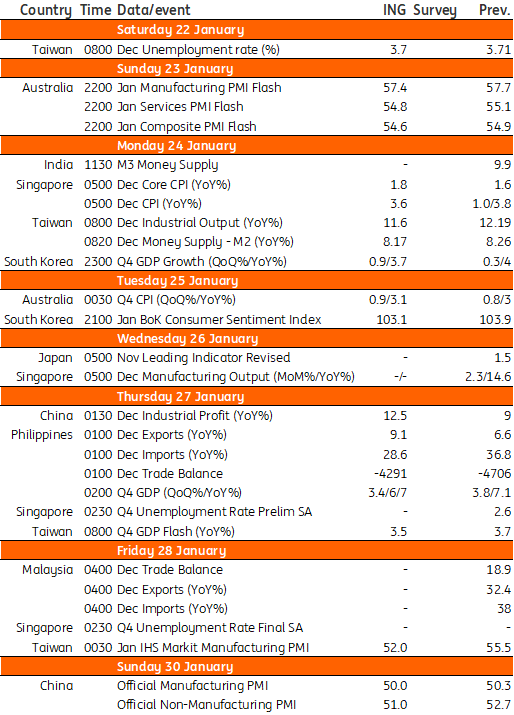