Asia week ahead: Manufacturing activity and inflation reports out next week

The coming week features PMI reports from most Asian economies. We expect manufacturing activity to stay subdued due to the fallout from the ongoing Ukraine war, as well as stoppages in China.

Inflation reports from Korea and Indonesia

Price pressures continue to build globally caused by supply disruptions from the Ukraine war on top of export bans from countries hoping to ensure domestic supply security. Price pressures should remain strong in Korea, thus headline CPI inflation should hit 5.1% year-on-year. However, we think that monthly gain should slow down a bit due to fuel tax cuts, stable utility bills and the government releasing its fresh food stockpile earlier this month. If it turns out to be higher than the market consensus, then the probability of the Bank of Korea’s (BoK’s) hike in July and August is going to increase sharply. At the recent MPC meeting, BoK made it clear that it would prioritise inflation over growth. We mark a 25bp hike in July and November respectively, but we will revisit this after checking inflation data for a few months.

Similar trends are noted in Indonesia and headline inflation is expected to rise to 3.7% while core inflation accelerates to 3%. Bank Indonesia (BI) decided to keep rates untouched this week despite inflation heating up, confident that a round of fiscal subsidies can help keep price pressures at bay. Despite the dovish stance of the central bank, we expect inflation to accelerate further, which may prod BI to finally hike rates at the June meeting.

The rest of the field

The coming week also features labour market data from Japan and retail sales from Singapore. Japan’s jobless rate for April should remain at 2.6% as the re-opening effects should hire more labour while also attracting more people to enter the labour market. Industrial production for April should also benefit from the domestic demand recovery. Meanwhile, Singapore retail sales surprised on the upside in the previous month but we expect this momentum to fade as price pressures bite. Retail sales may still record an expansion but at a more moderate pace of 5%. Retail sales have been a good form of support for overall growth in 1Q and should remain modestly positive in 2Q. 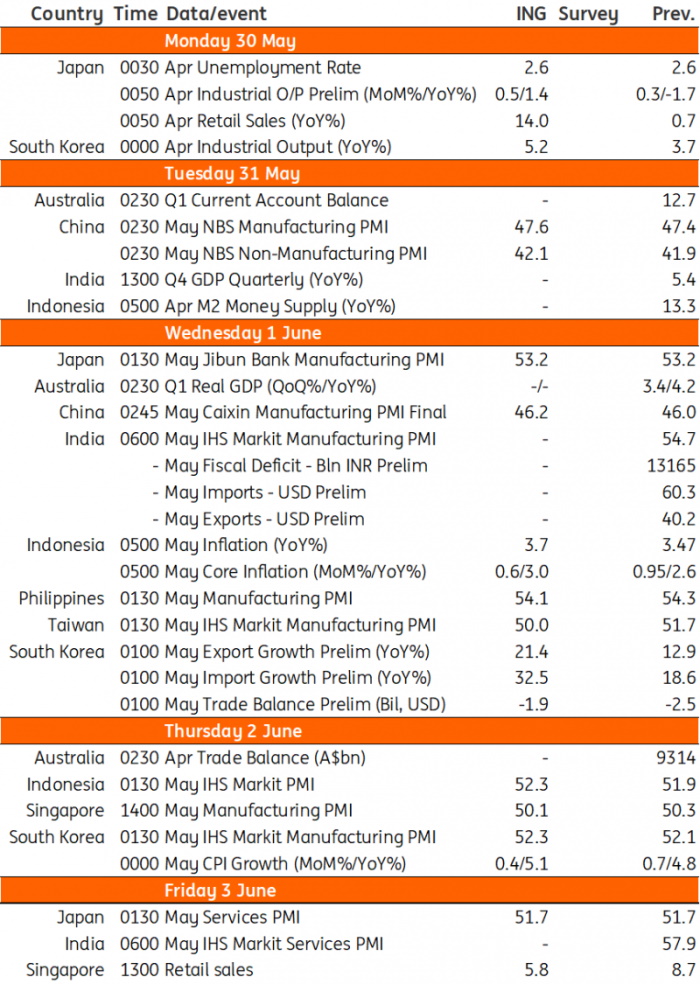