The week ahead
Australia’s releases are in the spotlight this coming week as the Reserve Bank of Australia decides on policy while 2Q22 GDP data is also released. Within the rest of the region, the Philippines will report August inflation data that will likely show the continuation of the year-long upward trend. Meanwhile, Singapore’s July retail sales data is expected to grow despite inflationary limitations.

Australia’s 2Q GDP report and the RBA meeting
We will get a day-ahead steer towards the GDP figure on 6 September, with the net export figures. The trade balance during 2Q22 was extremely strong relative to 1Q22, so we anticipate a very strong contribution to GDP from the net trade side. Domestic demand figures should also look pretty strong, though labour shortages may crimp this somewhat. A figure of 1.0% quarter-on-quarter seems possible to us, a bit stronger than the 1Q22 growth rate of 0.8%.

Meanwhile, the Reserve Bank of Australia will probably not be swayed all that much by the GDP numbers, though they will likely be strong and tilt the balance a little towards larger rate increases. But the RBA will probably also have taken comfort in the 2Q22 wages price index, which showed a growth rate of only 2.6% year-on-year, softer than had been expected despite clear evidence of labour shortages and the record low unemployment rate. September will probably still deliver a 50bp rise in rates, taking the cash rate target to 2.35%, but there is a growing sense that the central bank may slow the pace of tightening from here on, and that may also add some downside risk to this meeting too.

Price pressures continue to build in the Philippines
August inflation in the Phillippines will likely stay elevated given rising food prices and expensive energy. We predict inflation to settle at 6.4%YoY, flat from the previous month although still well above the central bank’s target. Transport fares are set to be adjusted higher, for the second time this year, which should ensure that inflation remains firmly on an upward trajectory in the coming months.

Retail sales reports in Singapore
July retail sales will be reported next week. We expect retail sales to remain in expansion although the pace of growth should moderate from the previous month. Sales will be supported by the return of tourists although surging inflation should cap growth. Inflation recently hit 7%YoY, which should sap some consumption momentum. 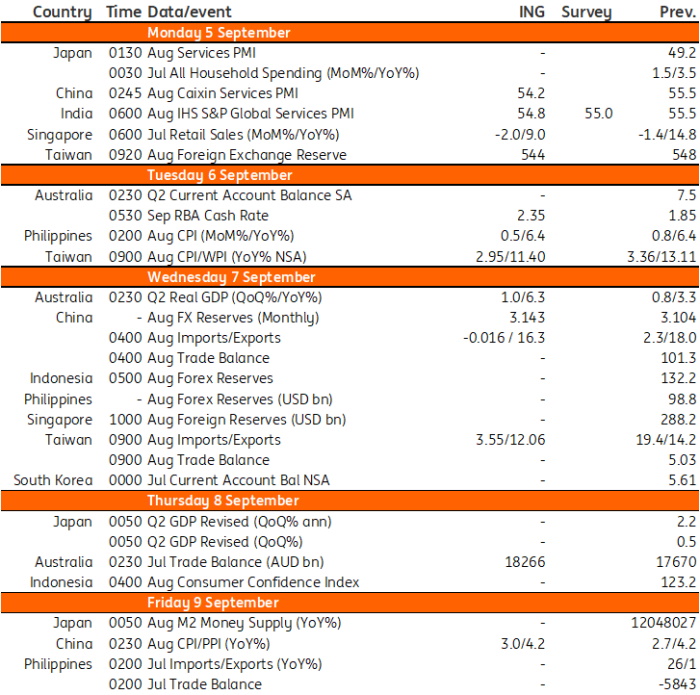