Confidence among Asian companies held near three-year lows in the first quarter as a U.S.-China trade dispute dragged on, pulling down a global economy that is already on a downward path, a Thomson Reuters/INSEAD survey found.

The Thomson Reuters/INSEAD Asian Business Sentiment Index tracking firms’ six-month outlook was flat in the March quarter from the previous quarter’s 63, compared with a near three-year low of 58 set in the September quarter.

A reading above 50 means optimistic respondents outnumbered pessimists, but the latest index still marks one of the five worst since the world started its recovery from the 2008-2009 global financial crisis.

“Things have not gotten worse but a lot of uncertainty is putting companies in wait-and-see mode,” Antonio Fatas, a Singapore-based economics professor at global business school INSEAD, said of U.S.-China talks on trade relations.

A global trade war was cited as the chief business risk by respondents for the third quarter in a row, though by a smaller margin. Higher interest rates emerged as the second-biggest risk, outpacing a slowing Chinese economy.

A total of 100 companies from a range of sectors responded to the survey, conducted from March 1-15 in 11 Asia-Pacific countries where 45 percent of the world’s population live and 32 percent of global gross domestic product is generated. 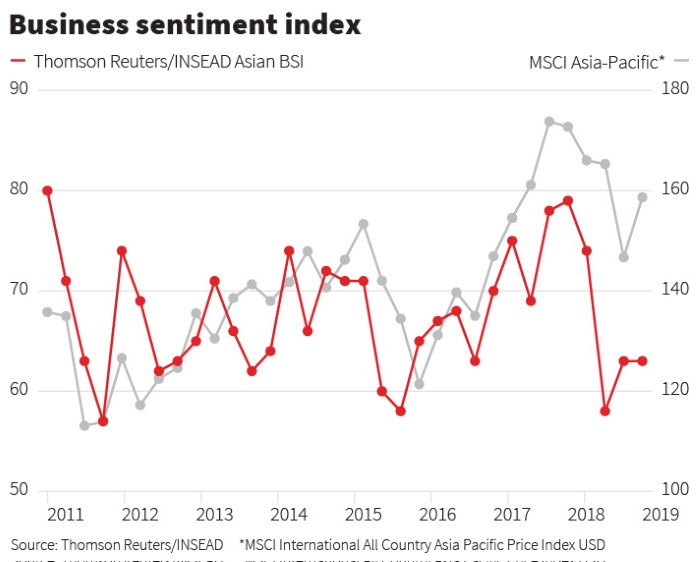 The United States and China have put on hold a planned escalation of their trade war pending negotiations, but the much-awaited conclusion of the latest round of talks has also been delayed even though remarks from the two sides have been optimistic.

Global agencies including the International Monetary Fund (IMF) and the Organisation for Economic Co-operation and Development (OECD) have said failure to resolve trade tension could further slow a downward-trending global economy.

The index staying above the neutral point of 50 suggests companies in Asia are not expecting an imminent global recession, but languishing near multi-year lows indicates companies are exerting caution.

“We don’t see a global hard landing as a likely scenario when we look at economic factors such as inflation and credit conditions,” said Young Sun Kwon, economist at Nomura in Hong Kong. “But there are big uncertainties in politics.”

Lessons from the 2008-2009 global financial meltdown have forced countries to strengthen economic defences, but factors such as Britain’s planned exit from the European Union and the U.S. Federal Reserve’s uncertain path are posing threats.

With less than two weeks before the March 29 divorce date, British Prime Minister Theresa May’s government is still struggling to push a departure deal with the EU through the British parliament.

In the United States, the Fed has declared a pause in its tightening campaign, but economists foresee at least one more increase later this year despite increasing signs of slowdown in major economies.

Note: Companies surveyed can change from quarter to quarter. 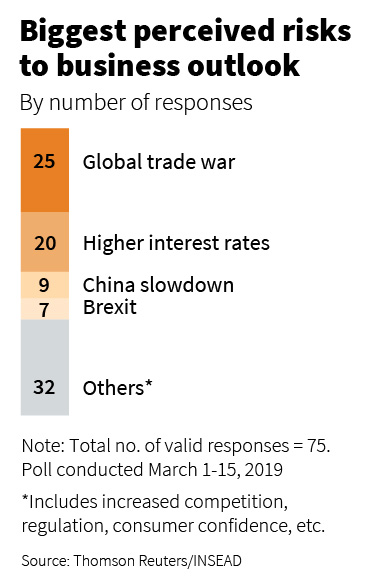 2019-03-21
hellenicshippingnews..
Previous: MARKETS SNAPSHOT FOR 20/03/19
Next: EUROSTAT European Union Statistical Office : A third of EU trade is with the United States and China