Corn import demand from Asia, especially Southeast Asia, is likely to stay largely unchanged in 2023, as a stronger US dollar and worries over the pace of economic growth will limit the purchasing power of consumers, US Grains Council Vice President Cary Sifferath said.

“I don’t think we will have a strong increase in demand, but hopefully maintain the current demand,” Sifferath said in an interview with S&P Global Commodity Insights.

The firming of the US dollar, especially against some of the key Asian currencies, and logistic issues in the US have raised the cost of imports for Southeast Asia, Japan, South Korea, and China — accounting for the bulk of the global corn inflows.

The export prices of corn from the US are currently uncompetitive compared to its rivals Brazil and Argentina.

“The strength of the dollar is really helping our competitors and then the river system here in the US — the Mississippi, Illinois, and the Ohio River — deliver large amounts of corn, soybeans, and other grains to the New Orleans Gulf region for export and because it has got very low water levels, the barge trade has been restricted so that you can’t put as much grain in a barge as you normally would,” Sifferath said.

Feed grain demand from Egypt, a key buyer in North Africa, has also been hurt due to the weakening of its currency against the dollar.

As a result, the Egyptian poultry industry is looking for small vessel supplies from Ukraine following the extension of the grain corridor period, rather than buying 60,000 mt corn shipments from the US or South America, he said.

Egypt imported 9.6 million mt of corn in 2021-22 (October-September), according to the US Department of Agriculture data.

Sifferath cautioned that if a recession sets in the US and other parts of the world, it could put downward pressure on commodity prices as well.
Mixed signals from China

China’s corn imports have been subdued this year compared to the last two years amid the pandemic-led lockdowns.

China imported 19.01 million mt of corn over January-October, down 27.5% from last year, according to the customs data.

While concerns loom over the feed grain demand from the country in 2023, with COVID-19 cases surging, there are also signs that consumption could improve going ahead.

Pork prices in China have risen, indicating a return in demand for pork products could likely lift feed demand as well, Sifferath said. 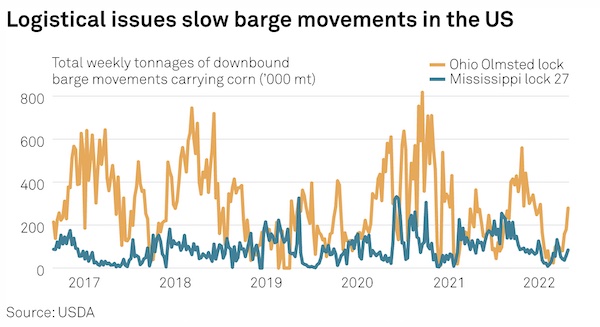 Moreover, corn prices are also up in the country, which is unusual for the period after the corn harvest.

“We are in mid-November and so you’re just finishing up corn harvests there in northeast China and you’re still seeing prices start to firm up and come up a little bit already. [Prices rising] this quickly at the end of their corn harvest tells me there’s a pretty strong demand for corn,” Sifferath said.

More competition for the US

Recently, China and Brazil signed agreements that paved the way for Brazilian corn to enter China. Until recently, China’s corn imports were mostly from the US and Ukraine.

“The global [trade] balance sheet really doesn’t change much there, but it does give us some competition into the China market, which I’m sure again, the Chinese government wants to see because they don’t want to be locked into just one supplier, especially if they’re going to have to buy 15-25 million mt of corn,” Sifferath said.

China’s corn imports from the US already fell sharply in 2022-23 from the previous season.

The river water level gets close to normal by January-February and, corn and soybean shipments out of the Gulf become more attractive. China may try to get as much corn as possible out of Brazil until the US corn becomes cheaper, he said.

With the entry of another big buyer in Brazil, the flow of corn from the country to other regular buyers will likely be impacted.

Whatever quantity Brazil exports to China, about that much may not be going to Japan or South Korea or North Africa or even into Europe, he said.

“Now that it happened, it will give hardship to South Korean buyers. South Korea needs to find a way to fill the gap for February shipments until Argentina crop reaches the market,” a South Korean trader told S&P Global.

Platts, part of S&P Global, assessed corn FOB Santos at $304.90/mt on Nov. 29 for January loading, while US Gulf FOB prices were pegged at $315.16/mt for February loading.
Source: Platts