Automotive fuel demand in Southeast Asia’s biggest oil product consuming nation has been fragile amid tepid recovery in the country’s tourism sector, while consumer confidence and purchasing power continued to weaken, with local currency Rupiah falling around 5% against the dollar. 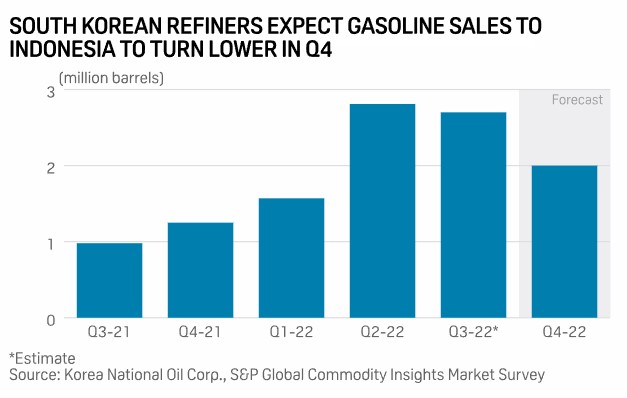 The cutback in the Indonesian government’s subsidy spending and the latest fuel price hike could significantly hit domestic gasoline and diesel demand, leading to less middle distillate imports in the coming months as well, according to traders based in Singapore and Kuala Lumpur, as well as product marketers at two South Korean refiners.

Indonesia’s total September gasoline imports are expected to be as low as 7-8 million barrels, down from previous estimates of above 9 million barrels, S&P Global Commodity Insights reported earlier.

In July, state-run energy firm Pertamina had indicated that it was confident of producing and importing ample supply of oil products, while keeping retail prices of popular fuels such as diesel and 88 RON gasoline steady thanks to the government’s strong subsidy support.

The government’s full support for Pertamina makes distributing subsidized fuel easier, the state-run company said previously. Pertamina would receive Rupiah 93.5 trillion ($6.25 billion) in subsidies and compensation from the government in 2022, higher than Rupiah 64.5 trillion ($4.3 billion) in compensation received for 2021 subsidized fuel distribution, the company said in a statement.

However, Indonesia has completely overturned its generous spending stance, with President Joko Widodo raising subsidized fuel prices by about 30% Sept. 3 to put brakes on ballooning energy subsidy budget and save on government spending.

Fuel subsidies have long been sensitive in Southeast Asia’s largest economy. The government has subsidized fuel regularly over the past decades.

“Indonesia had already deferred about 1.6 million barrels from September to October. The country may still need to increase domestic prices and would likely not issue additional spot tenders for imports as cash differentials for 92 RON are at $5/b, up sharply from $3/b earlier,” said a Singapore-based gasoline trader.

South Korea, Asia’s major middle distillate supplier, has been posting robust gasoline exports to Indonesia so far this year, but the strong sales momentum could come to a halt in fourth quarter as consumers in the Southeast Asia’s biggest economy are poised to tighten their belt, oil product marketers at two South Korean refiners said.

Initial target for the Q4 sales to Indonesia was set in the range of 2 million-3 million barrels, but the latest fuel price hike and a sharp dip in domestic consumer sentiment could mean Oct-Dec exports may struggle to meet the lower end of the target range, according to fuel sales and export logistics managers at South Korean refiners said.

Middle distillate traders based in Singapore also indicated that Peramina’s Q4 automotive fuel imports would likely fall below the three-year quarterly average, but Indonesia’s domestic gasoline demand is unlikely to fall substantially, as gasoline-powered vehicles remain the main mode of transport in Indonesia.

“It’s hard to travel without a car or a motorbike in Indonesia,” another Singapore-based gasoline trader said.
Source: Platts