Home / Shipping News / Port News / Aurelio Martínez: “We approach the railway closer to the companies so that containers travel by this means of transport”

Aurelio Martínez: “We approach the railway closer to the companies so that containers travel by this means of transport”

The Port Authority of Valencia (PAV) will invest 240 million Euro in the ports of Valencia and Sagunto to make the railway the transport of the future.

In the first nine months of the year, Valenciaport has handled 2,251,193 tons of freight through railway traffic, 18.38% more than in the same period of the previous year.

Aurelio Martínez took part in the presentation of the “Goods by train” campaign which took place in Valencia’s Town Hall Square.

The president of the Port Authority of Valencia (PAV), Aurelio Martínez, has highlighted the bet Valenciaport is making on the railway with an investment for the next years of 240 million euros with the aim of making the train the transport of the future and a perfect ally of the maritime one. “We are approaching the railway closer to the companies so that containers travel by this means of transport. Our commitment is clear and this allows us to be the first port in commercial relations via rail with Madrid, to have more transport volume and to consolidate our position as the leading port in Spain”.

Martínez took part in the presentation of the “Goods by train” campaign which was held this morning in the València Town Hall square. “This initiative is an awareness-raising element for citizens to see the commitment Valenciaport is making to connect all our hinterland through the railway with the port areas of Valencia and Sagunto”.

Aurelio Martínez pointed out that “the railway is more environmentally sustainable, it decongests roads and it is efficient for the transport of goods in specific distances as from 300 kilometres. The railway is essential. Most European countries have freight transport rates by train above 20% and in Spain we are at 4.5%. We have a lot of room for improvement and Valenciaport will be an ally to promote this interconnectivity. We have to bet on the railway to reverse this situation and increase freight transport by train”.

Inmaculada Rodríguez Piñero, Member of the European Parliament, stated that “we have to get freight on the train. In the United States, the transport of goods by train represents 33% of the total, in the European Union 18% and in Spain we are above 4%. We cannot meet the objectives of the Green Pact if freight transport is not carried out by the most efficient and cleanest means”.

Valenciaport, with the railway

“We are investing in internal infrastructures to adapt the ports of Sagunto and Valencia to the railway network and connections at national level, or improving the Valencia-Teruel-Zaragoza line”, explained Aurelio Martínez. Specifically, to favour the railway accessibility to the Port of Valencia, more than 125.5 million euros are planned for works such as the remodelling of the railway beach of the Príncipe Felipe quay, the reform of the railway network between the Poniente and Costa quays or the railway access to the terminal. In the case of Sagunto, we are going to allocate 97.6 million euros to improve the internal network and access to the port area. In addition, we are supporting the facilities and the line between Sagunto-Teruel-Zaragoza with the construction of sidings and other initiatives, such as the Vicálvaro Intermodal Station or the railway motorway linking the port of Valencia with Madrid.

According to data from the APV Statistical Bulletin, between January and September a total of 2,251,193 tonnes of goods were moved by rail traffic, which is 18.38% more than in the same period in 2020. Likewise, the number of TEUs (standard 20-foot containers) handled by rail was 164,059, a 12% increase.

Valenciaport has recently signed an agreement with ADIF and the company Tramesa, for the first Iberian gauge rail motorway linking Valencia and Madrid, an infrastructure that will carry special wagons that will allow a crane to pick up the lorry platform, lift it and place it in a wagon adapted to lorries. In fact, the Port of Valencia’s commitment with the railway has already led 160,000 containers to stop using the road to be transported by rail to Madrid, which represents 80% of this traffic. 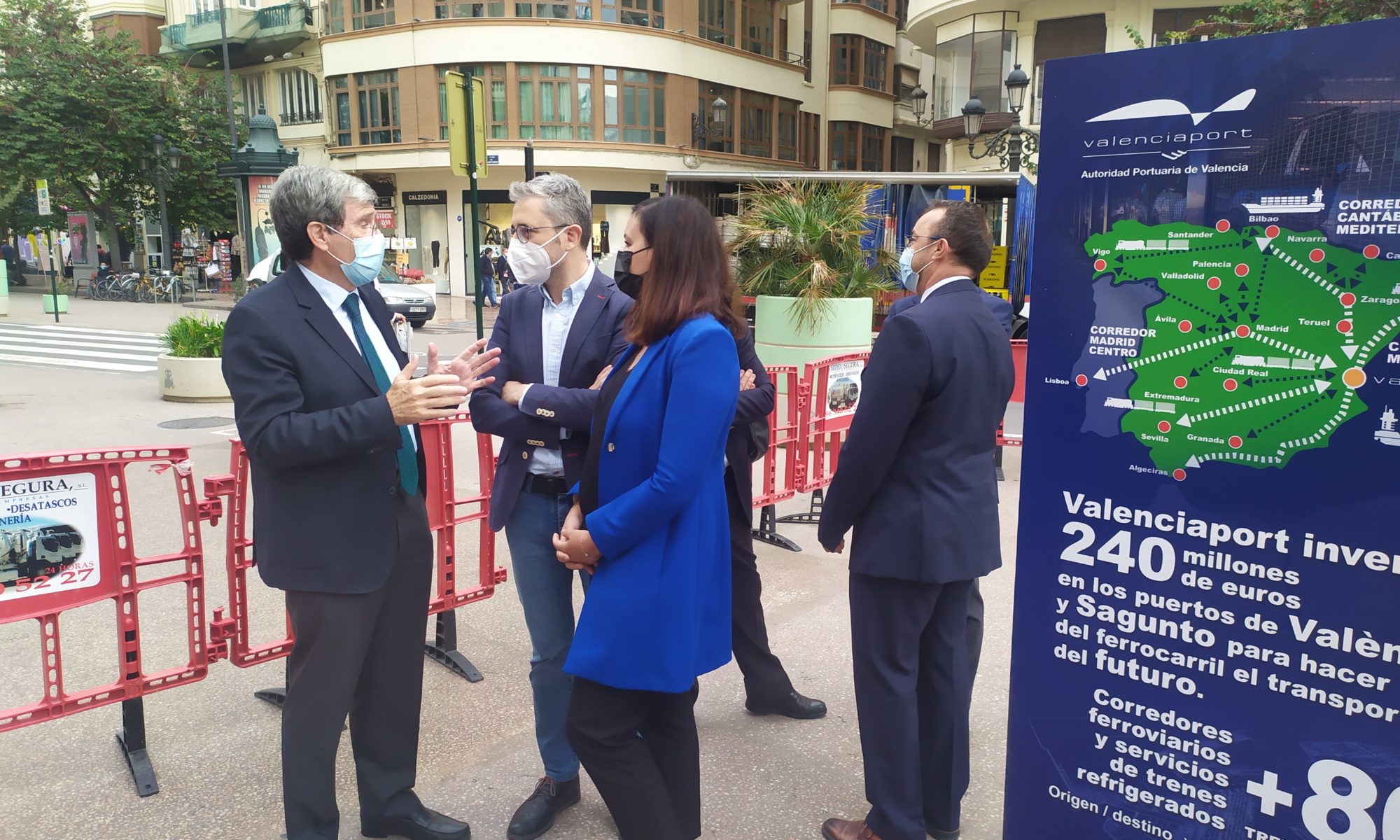 A campaign with great support

The launch of “Goods by Train” has been warmly welcomed by companies and institutions that see this means of transport as the solution to decarbonise transport. In line with their environmental commitments, they wanted to make a much-needed proposal a reality, that of caring for the environment in which they carry out their activity, designing an intermodal supply chain that is neutral in emissions and calling on society to be part of the change.

The event was also attended by the MEP Inmaculada Rodríguez-Piñeiro, the Councillor for Territorial Policy, Public Works and Mobility, Arcadi España, the Deputy Mayor of Valencia, Sandra Gómez, and the Government Commissioner for the Mediterranean Corridor, Josep Vicent Boira, among others.

Goods by train: A proposal full of advantages

“Goods by Train” starts in the context of the “European Year of the Railway”. This commemoration highlights the importance that will be given to becoming the first climate-neutral continent by 2050. The European Green Pact aims to reduce transport-related emissions by 90%. For this reason, it is committed to the most sustainable means of transport, which accounts for only 0.4% of the EU’s greenhouse gas emissions, has 12 times less external costs for society than road transport and consumes 6 times less energy. It is time-competitive, safe and very efficient in covering the supply of any item, product or material over short and long distances.
Source: Port Authority of Valencia