In Australia, 2019 is already a record year for utility solar, wind and storage project proposals. Coal-fired generation could be extinct by 2040.

The total pipeline of projects now stands at 133 GW, up from 94 GW at the start of the year, according to Rystad Energy, the independent energy research and consulting firm headquartered in Norway and with offices across the globe. 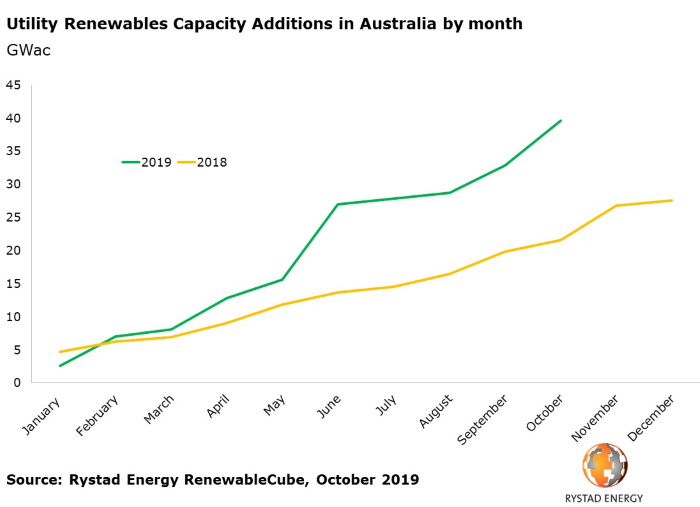 A total of 39.4 GW of capacity has been added year-to-date. Utility solar accounts for 54% of this, whereas utility storage and utility wind account for 25% and 21%, respectively.

Clean energy has covered 22% of Australia’s total electricity needs so far this year, and the renewables boom is poised to increase that contribution significantly in the coming years.

“Actually, exports will drive Australia’s renewables’ share of the energy mix closer to 500% than 50% thanks to the rising number of large-scale projects fueling hydrogen generation. This year has seen an increased number of mega renewable projects in Australia, and we expect this trend to continue as state and national hydrogen strategies are forming,” Dixon remarked.

The planned retirements of ageing coal plants continue to drive growth in grid connected projects over the long term. Some 23 GW of coal-fired capacity is due to retire from the system, creating an opportunity for 60-70 GW of solar and wind, according to Rystad Energy’s projections.

“Despite these projects retiring over the next 30 years, we believe coal-fired generation could be extinct by 2040 – as we expect a flood of storage projects entering the system by 2025. Coal will struggle to compete economically in this market and will also be driven out by growing consumer sentiment for cleaner fuel,” Dixon added.

Also the corporate sector is turning to renewables for a cleaner alternative power source and to reduce price volatility. Electrification of LNG facilities has the potential to save 410 billion cubic feet (Bcf) of gas annually, approximately equivalent to the entire gas demand of Australia’s East Coast (438 Bcf).

“We expect this trend to continue with energy intensive users of power and gas – with the electrification of LNG projects presenting a silver bullet for Australia’s East Coast gas crisis,” Dixon remarked.

The new projects proposed in 2019 can be split into three broad segments. The first are renewable projects proposing to connect to the National Electricity Market (NEM). The second are projects proposed for the off-grid mining/resources industry, which consumes 10% of Australia’s total energy use. These projects are competing with expensive gas and diesel for power generation. The third segment is the emerging export market, with several projects proposing to export solar and wind energy via hydrogen and/or High Voltage Direct Current (HVDC) transmission. These three opportunities, combined with Australia’s global leading residential and commercial PV sector, will likely drive growth for solar PV in Australia to 35 GW in 2025.
Source: Rystad Energy