There has been much talk in recent weeks and months about Chinese coal policy, particularly with regard to imports from Australia, after anecdotal evidence suggest Chinese importers have been told to shun Australian thermal coal.

But what does the data say?

Chinese coal imports were certainly down in October, falling to 13.7 million tonnes from 18.7m in September and 25.7m in October 2019. This marks the sixth consecutive month in which coal imports have been lower this year than last.

The drop in imports are not just limited to Australia. In fact, both in percentage and absolute terms, imports from Indonesia fell by more than those from Australia in October. Imports from the former fell by 75.4% (-8.6 million tonnes), whereas those of Australian coal fell by 60.4% (-3.8 million tonnes). 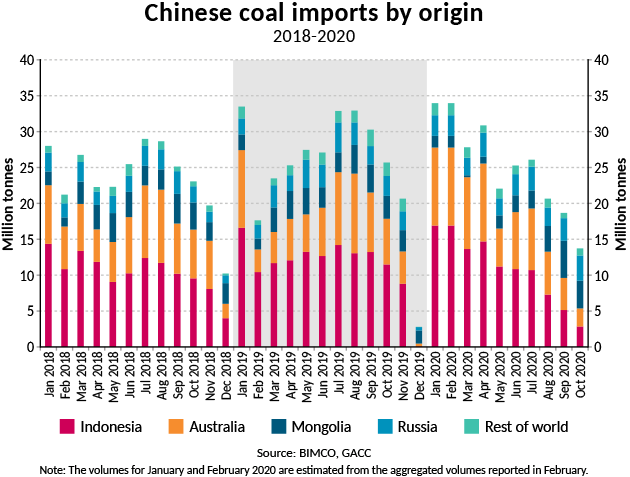 Adding to the headache for shipping is the fact that Mongolia and Russia took over as top coal exporters to China. In fact, the drop in imports from Indonesia and Australia means that Mongolia took the top spot as China’s main coal supplier in October, with imports totalling 3.9 million tonnes, 20.4% higher than in October 2019. Russia jumped to second spot at 3.5 million tonnes (+28.3%). Mongolian coal exports to China are not transported by sea and the majority of Russian coal arrives by rail, further lowering the tonne mile demand generated by Chinese coal imports, which is already low due to the short sailing distances from Australia and Indonesia.

Surprise? Australia best performing in the first ten months of the year

Despite all the chatter, between January and October, Chinese coal imports from Australia have been record high at 77.4 million tonnes, a 7.6% increase from the same period last year. This is the equivalent of 775 Post-Panamax loads (100,000 tonnes). Russia is the only other major country to have seen growth in the first ten months of this year, at 29.5m tonnes (+1.3% from 10M 2019) and overtaking Mongolia for third spot, though it still has a long way to go to catch up with Indonesia or Australia.

Despite a 14.4% drop in coal imports from Indonesia in the first ten months of the year, it remains by far the largest origin for Chinese coal imports. Between January and October, China imported 110.2 million tonnes of coal from Indonesia, down 18.5m tonnes (185 Post-Panamax loads). 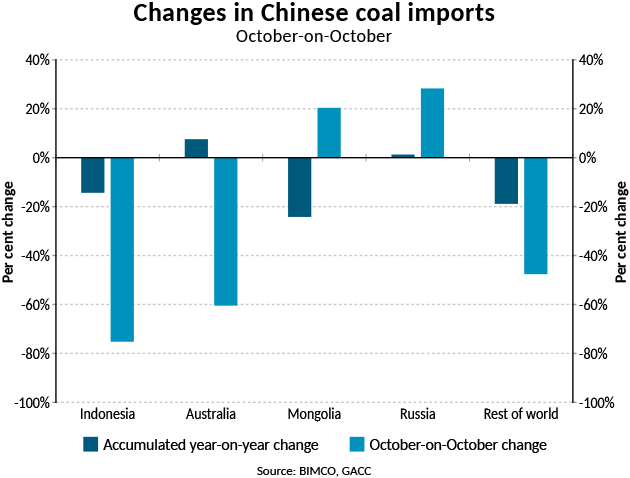 With new deal imports will continue to come by sea, but sailing distances will fall

With rumours rife about substitutes for Australian coal, a deal was recently announced between China and Indonesia. China is said to have agreed to buy around USD 1.47 billion worth of coal from Indonesia in a three-year time frame. The Memorandum of Understanding is light on details and several key details are yet to be agreed upon, such as the actual volumes to be exported in 2021 and beyond, and a price index that can be negotiated regularly.

The deal must be put into context. In the three years between 2017 and 2019, China imported USD 20.3 billion worth of coal from Indonesia, an average of USD6.8b a year. At just USD 1.47 billion, this deal formalises only a small proportion of this deal and is a long way from making up for lost volumes from Australia.

“Though still light on details and highly symbolic, this MoU is a clear signal from China that it is strengthening its ties with its other major coal suppliers, and that it will not suddenly return to large-scale buying of Australian coal when the calendar shows 2021,” says Peter Sand, BIMCO’s Chief Shipping Analyst.

Despite the limited scope of the deal, it brings both good and bad news for shipping. The good news is that exports from Indonesia travel by sea, rather than by land, as is the case for coal arriving from Mongolia and Russia. The bad news is that the sailing distance is short, affecting tonne mile demand.
Source: BIMCO, Peter Sand, Chief Shipping Analyst