Consolidation initiative with other ship owners high on the agenda. 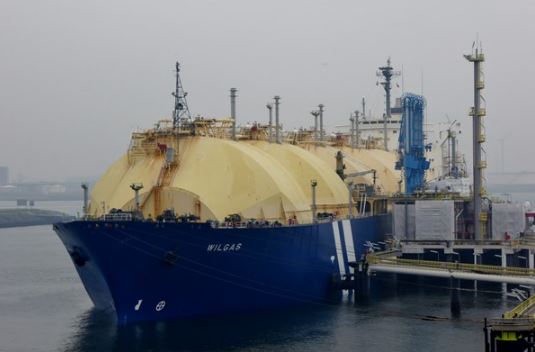 MARKET UPDATE
A relatively warm winter in the Far East and high storage levels in China and South Korea resulted in muted gas buying interest in the quarter and the downward gas price pressure seen in Q4 2018 continued throughout Q1 2019. FE gas prices started the quarter at USD 9.0/MMBTU and ended at USD 5.1/MMBTU, whereas UK NBP started Q1 at USD 8.4/MMBTU and closed at USD 5.1/MMBTU. Henry Hub opened at USD 3.9/MMBTU and closed at USD 2.8/MMBTU. Due to weak demand and ample cargo availability Asian LNG futures prices for Q2 2019 delivery continued falling until early April, at which point buyers started positioning for the seasonally stronger summer months.

Global LNG trade including reloads is estimated by Fearnleys LNG to have increased by about 8-9 % in Q1 y-o-y, but due to lack of arbitrage between the basins, weak demand in the Far East and redirection of volumes into Europe average sailing distances fell by the same number. Shipping demand was essentially flat compared to Q1 2018 and coupled with a 10 % growth in the fleet since Q1 2018 rates suffered. According to Fearnleys LNG headline TFDE day rates started the quarter at USD 110,000 in both basins. End of March rates were assessed at USD 36,000 and USD 37,000 per day West and East of Suez respectively. LNG imports to China increased by about 21 % in Q1 2019 y-o-y.

Imports to South Korea, India and Japan decreased by 19 %, 12 % and 9 % respectively, due to temporary weather effects and restarting of nuclear plants in Japan and South Korea. A total of 44 MTPA of new LNG nameplate production capacity started up in 2018, of which 27 MTPA added in Q4 2018 is not expected to produce at capacity until Q2 2019. A further 20 MTPA of new LNG production capacity is expected to commence production in 2019, followed by 63 MTPA under construction with startup 2020 to 2024. According to industry analysts new LNG production plants with total potential production capacity of over 380 MTPA are in various stages of pre-FID planning, and market analysts assess more than 60 MTPA as likely to reach FID in 2019 including Golden Pass (15.6 MTPA) which was sanctioned in February. In Q1 2019 12 vessels were delivered and 11 vessels were ordered. According to shipbrokers the orderbook at the end of Q1 2019 for LNG vessels above 150,000 cbm (excl. FSRU and FLNG) was 106 vessels, of which about 40 are assumed available for contract. A further 27 vessels are scheduled for delivery in 2019, 35 in 2020, 43 in 2021 and 4 in 2022.

OUTLOOK
The mild winter, well stocked inventories and ample supply has translated into a weak shipping market so far in 2019. Current spot rates are about USD 35,000 – 50,000 per day, but multi-month charters with delivery in Q3 2019 are being concluded at considerably higher rates to provide for winter coverage. At current gas prices the LNG energy equivalent to oil costs less than USD 30/bbl, and with Brent at around USD 70/bbl demand for LNG is expected to increase going forward. A total of 83 MTPA of new LNG production capacity is expected to start up in 2019 to 2024 of which 68 MTPA in North America.

New US volumes are expected to increase average sailing distances, and tonnage demand and supply looks balanced the next few years. However, periods of volatility and seasonality should be expected. Several new LNG production plants are expected to be sanctioned in the next 6-12 months to meet the growing demand for gas, estimated at double the growth rate of the total global energy demand according to Shell Energy Outlook. Awilco LNG has one vessel on contract until mid-July 2019 and one vessel trading in the spot market and is well positioned in this firming market.