The major challenges facing maritime transport include growing global trade volumes, improving maritime safety and increasing productivity and profitability. Increasing maritime traffic results in an increase in dangerous situations in which accidents are often accompanied by human error. And globalization and digitization require ongoing efforts from companies to optimize processes and reduce operating costs through efficiency gains in order to remain competitive in the long run.

The German Federal Government is responding to these challenges by funding research in the BMWi’s (Federal Ministry for Economic Affairs and Energy) “Maritime Technologien der nächsten Generation” (Next Generation of Maritime Technologies) program. The research priorities of this program include maritime digitization, smart technologies and maritime security. The development of innovative solutions to market maturity is intended to secure and extend a technological lead in German and European maritime research.

Against this background, the Fraunhofer CML has initiated a research project in which the watchfree bridge (B Zero) is to be developed. In contrast to unmanned ships, nautical officers are on board, but under certain conditions B ZERO should enable a completely unmanned bridge for up to eight hours so that the officers can realize flexible watch rhythms or perform other tasks. B ZERO is to be made possible by the use of sensors to record the ship’s environment, decision support systems to evaluate the recorded information and initiate appropriate reactions, and a documentation system that prepares and stores the most important data. The watch-free bridge will function in open water for an initial period of eight hours under moderate environmental conditions. 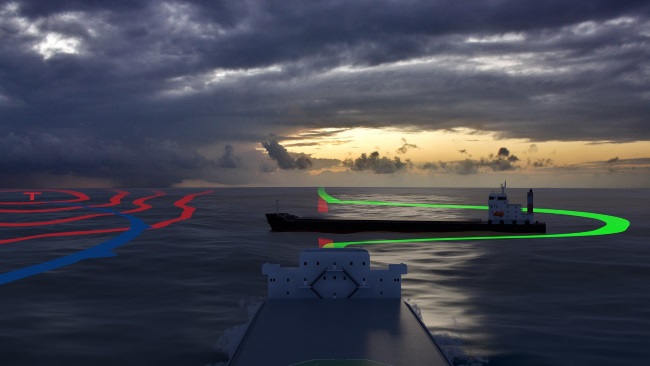 Four building blocks are required for the implementation of B ZERO, which are to be developed over the next three years:
– AutoLookout: a sensor system that reliably detects, identifies and observes objects in the vicinity of the ship.
– AutoOOW (OOW stands for Officer On Watch): an intelligent navigation system that also implements certain navigation decisions according to predefined standing orders without the presence of a nautical officer on the bridge.
– Human-Machine Interface B ZERO-HMI (HMI for Human Machine Interface): cooperation and integrated processes between the watchfree nautical officer and the autonomous system, even during critical situations.
– Performance standard designs: rules for a later implementation of the developed technologies on an industrial scale.

The system is to be piloted from the beginning under real conditions. The MV Henrika Schulte (MOL GLIDE), a 5,600 TEU container freighter in Atlantic traffic, is available as a test ship, on which current prototypes are regularly installed and tested. Parallel to this, accompanying safety and human factor tests will be carried out as part of the ship handling simulation environment at the Fraunhofer CML.

Partners in the research consortium are Fraunhofer and the Bernhard Schulte Group, which provides the test ship and develops the technical and operational concept. Wärtsilä SAM develops the environmental sensors for the lookout, while Hoppe Bordmesstechnik will be responsible for developing the internal sensors and the trim position. The automatic documentation of the travels during the watchfree time in B ZERO is carried out with the electronic logbook of NautilusLog. The technical developments will be accompanied by the Bundesamt für Seeschifffahrt und Hydrographie BSH (Federal Institute for Maritime Navigation and Hydrography), which will deal with the validation and verification of semi-autonomous bridge systems as part of B ZERO. The navigation information for the bridge will be presented by Fraunhofer FKIE. The CML develops the nautical decision making and coordinates the project.
One thing is already certain: With the focus on the development of smart technologies and nautical assistance systems for maritime navigation and the improvement of safety at sea through the use of sensor technologies and data analysis, the findings gained within the framework of B ZERO offer potential for further exciting developments. Work on the development of B ZERO will begin in December 2019. The project is funded by the BMWi with 2.7 million euros as part of the “Maritime Technologies of the Next Generation” funding programme.
Source: Fraunhofer CML