Baleària’s Hypatia de Alejandría, the first liquified natural gas-propelled smart ship to sail the Mediterranean, completed its first commercial trip last night between Barcelona and Palma. The ferry reached the Port of Barcelona last Sunday from Venice where the shipyard Cantiere Navale Visentini, where it was built, is located. The Chairman of Baleària, Adolfo Utor, and the Chairwoman of Port of Barcelona, Mercè Conesa, exchanged metopes yesterday at noon to commemorate the first port of call for the Hypatia de Alejandría at this port which, just like the shipping company, is committed to reducing emissions and promoting the use of LNG.

“The Hypatia de Alejandría is an important milestone for the history of Baleària as well as for sailing in the Mediterranean since it is the first passenger ferry to be propelled by natural gas to sail through these waters. It will be followed in a few months by its twin Marie Curie,” underlined Utor. The shipping company has invested 200 million euros in the construction of these two vessels – real examples of innovation and sustainability – propelled by dual LNG and fuel engines (with 20,600 kW of power). 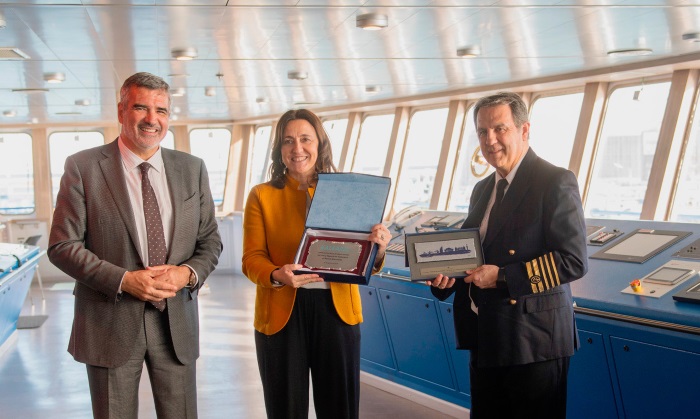 The Chairman of Baleària, Adolfo Utor, the Chairwoman of Port of Barcelona, Mercè Conesa, and the captain of the ship, Pedro Puertas.

Besides starting a new era at Baleària marked by the use of liquified natural gas as a fuel, the Hypatia de Alejandría is the company’s first smart ship which includes technological innovations to better serve customers and enhance their onboard experiences.

Some of the new developments that stand out include the digitisation of all signage, access to cabins without having stop at reception (with the use of a QR code received by customers on their mobile phones), a camera system that has been installed in the pet area (which will allow passengers the possibility of monitoring them throughout the trip on their smartphones) and self-service totems in the café and self-service restaurant (where passengers will order and be notified to pick them up via digital screens to avoid long lines).

With regard to the digital entertainment offered, the ship now has a platform to contract Wi-Fi services so passengers can connect to television and film content via their mobile phones including the latest new releases, in addition to games and a selection of books and magazines. This platform with a-la-carte digital content is also accessible from the smart TVs in the cabins.

Smart technology and digitisation not only have an impact on the passenger experience on the Hypatia de Alejandría, but are also enhancing the vessel’s energy efficiency. Thus, a land-based system is currently being implemented to monitor the entire ship propulsion system to guarantee optimal operation and detect and resolve possible incidents remotely. 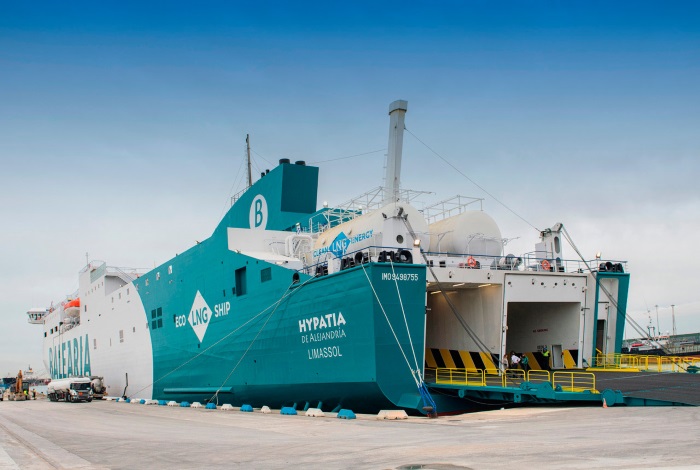 Technical data sheet and onboard services

As far as its technical characteristics, the all-new ferry is 186.5 metres long and has a capacity for 800 people, 2194 linear metres of cargo space and room for 166 vehicles. To accommodate passengers, it has three seating areas (two standard and one superior) equipped with reclining seats and 120 cabins with capacity for up to four people, all equipped with full baths, air conditioning, Wi-Fi, a smart TV and a digital entertainment system as well as two cabins for people with reduced mobility. The Hypatia de Alejandría also has a shop, café, self-service and a-la-carte restaurant in addition to Jacuzzis on the outside deck.

The name of the ship pays homage to the teacher and scientist Hypatia from Alexandria, who offered unequalled progress in mathematics and physics. In all six of the shipping company’s vessels have been baptised with names of pioneer women in their respective fields as part of its commitment to one of the Sustainable Development Goals: equality and women’s empowerment.

Besides the Hypatia de Alejandría, and its twin Marie Curie, Baleària has also ordered the construction by the shipyard Armon in Gijón of the Eleanor Roosevelt, the first fast ferry in the world for passengers and cargo propelled by dual natural gas engines. At the same time, another project has already begun to refit six of its ships to sail with this fuel. This one will take two years to complete and has been subsidised by the EU.

Baleària’s strategic commitment to LNG, which was planned eight years ago, fulfils social responsibility and profitability criteria as it moves ahead of the ever more demanding contaminating gas regulations. Thus, the shipping company expects to have at least half of its fleet of ferries sailing with this clean energy within the next three years and reach one hundred percent of its fleet within ten years. Liquefied natural gas is an environmentally-friendly clean fuel that more than complies with current and future pollution standards. Its use reduces CO2 emissions by up to 35%, NOx by 85% and sulphur and particles by 100%, which means it has an immediate impact on improving air quality and limiting the greenhouse gas effect.
Source: Balearia