Despite hopes that a quick economic recovery in China would boost iron ore demand, 2023 has so far been a disappointment for the dry bulk shipping sector. During the first three weeks of the year, iron ore shipments fell 13.1% y/y, the lowest volume since at least 2019, worsening conditions for capesizes. In this period, the Baltic Dry Index (BDI) declined by almost 500 points to 763 on 20 January, its lowest point since June 2020.

It is not unusual for the bulk market to cool during the first quarter when demand weakens during the Lunar New Year celebrations. This year, the New Year fell on 22 January, a week earlier than in 2022, which could partly explain why iron ore has so far underperformed.

Disruptions in Brazil have also contributed to a weak market and caused iron ore shipments out of the country to fall 34.2% y/y, also in the first three weeks of the year. Mining operations were halted due to heavy seasonal rains, similar to what happened in February 2022. Iron ore exports from Australia have failed to fill this gap with volumes down 11.9% y/y. 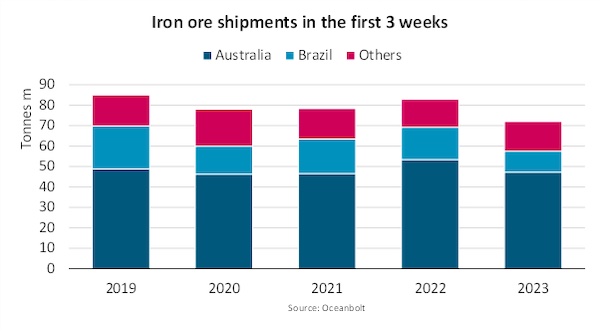 For rates to recover, higher demand is necessary, as the supply of capesize ships is unlikely to reduce further. Laden capesize ships have already slowed down to below 10.5 knots on average. Congestion also spiked last week due to disruptions in Eastern Australia, reducing the number of available ships.

Although rates are currently low, market sentiment remains more positive for the rest of the year. Capesize Freight Forward Agreements (FFAs) for 2023 have rebounded by almost 30% to 15,350 since China eased its zero-COVID policy in early December. One year time charter rates have also recovered to USD 16,000 per day from USD 12,250 per day, a low point seen in September 2022.

The market conditions for capesizes will remain largely dependent on the recovery of China’s real estate sector. Favourable conditions such as low mortgage rates and high household savings are driving hopes for a quick rebound whereas consumer sentiment remains weak and could delay recovery towards the second half of the year. An increase in iron ore prices of more than 50% since early November could indicate otherwise, but the price increases appear to be driven more by speculative deals rather than firm underlying demand.

As such, although iron ore exports and rates had a weak start to 2023, conditions are expected to gradually improve given the current economic outlook for China.
Source: BIMCO, https://www.bimco.org/news-and-trends/market-reports/shipping-number-of-the-week/20230125-snow

A Look Into the Greek Maritime Fleet